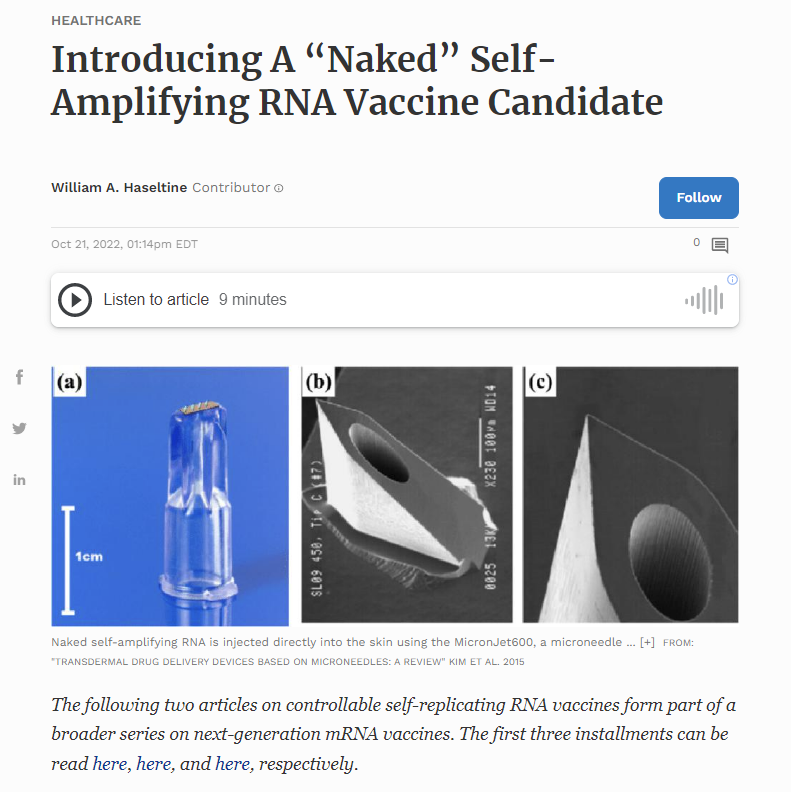 The following two articles on a controllable self-replicating RNA vaccine form part of a broader series on next-generation mRNA vaccines. The first three installments can be read here, here, and here, respectively.

A second generation of Covid-19 mRNA vaccines is making its way onto the scene. Common to many of them is the use of self-amplifying RNA technology, which maximizes antigen expression. Now, researchers have developed a self-amplifying RNA vaccine with a number of exciting new characteristics. First, it doesn’t require any of the nucleobase modifications that conventional mRNA vaccines depend on for improved stability. Second, it simply uses “naked” RNA injected directly without a protective lipid nanoparticle. Third, the vaccine is designed to be administered into the outer layer of the skin —the dermis— for improved cellular immunity. And fourth, it has been optimized to suit the temperature range of the surface of the body, rather than the core of the body.

Here, we take a look at how the vaccine designed by Amano et al. differs from conventional mRNA vaccines and even other self-amplifying RNA vaccines. In a follow-up article we will take a look at what impact these changes have, focusing on results in animal models.

What is Self-Amplifying RNA Technology?

Messenger RNA (mRNA) vaccines work by exposing our cells to the genetic material needed to build a target antigen. In the case of SARS-CoV-2, this is usually the spike protein that the virus uses to bind and enter our cells. Essentially, mRNA vaccines take advantage of our cells’ own protein-making machinery to produce SARS-CoV-2 proteins “in-house”.

Self-amplifying RNA technology further optimizes this process. Where conventional mRNA vaccines only include the genetic information for the antigen protein, self-amplifying RNA vaccines include a sequence of alphavirus RNA that encodes four non-structural proteins. These nonstructural proteins come together once in the cell to form an enzyme called RNA replicase — think of this as a genetic photocopier. The RNA replicase makes many copies of the target mRNA, each of which can then go on to be translated into the antigen (Figure 1).

No Need for Lipid Nanoparticles or Nucleobase Modifications

Self-amplifying RNA technology, as epitomized by this vaccine, undercuts two of the current shibboleths typical of conventional mRNA vaccines, including Pfizer’s and Moderna’s. For one, self-amplifying RNA vaccines work perfectly well without any nucleobase modifications — no need to substitute uridine with pseudouridine, for example. Additionally, it appears that in some circumstances self-amplifying RNA technology allows us to dispense with lipid nanoparticle formulations entirely, and that is without great sacrifices to uptake or gene expression. This vaccine is developed using “naked” RNA alone.

A recent report, published in the journal Current Opinion in Virology, outlines the advantages of self-amplifying RNA as well as the pros and cons of different delivery methods, such as administration into the skin rather than the muscle tissue. The report also compares and contrasts the results of using naked RNA with the results of using RNA complexed to lipid nanoparticles.

Engineering functional lipid nanoparticles is no easy task, with many promising candidates ultimately falling short during in vitro testing. Added to this is the fact that manufacturing reliably high-quality lipid nanoparticles, and the raw materials from which they are made, is a difficult process and can act as a limiting factor in vaccine production.

By using RNA derived from an alphavirus, Amano et al. avoid the need for lipid nanoparticles or nucleobase modifications, and in doing so, bypass the above mentioned manufacturing bottlenecks. The alphavirus RNA takes on a functional role similar to that of the lipid nanoparticles: shielding the target mRNA from degradation and helping it to get into our cells. Even if initial uptake is lower because of the lack of a lipid nanoparticle, this is made up for by the self-amplifying mechanism of the alphavirus RNA.

Intradermal Administration … With a Twist

Unlike most vaccines, which are administered into muscle tissue deep underneath the skin, Amano et al. designed their vaccine to be delivered into the dermis layer of skin. This has a number of distinct advantages, not least because 40% of our antigen-presenting cells (APCs) are found in the dermis. Antigen-presenting cells are a class of immune cells that help expose our adaptive immune system —our B and T cells— to foreign proteins. Another benefit is that intradermal injection can make use of alternative, pain-free injectors. The Gennova Gemcovac-19 vaccine, for example, is administered intradermally using a needle-free injector called the PharmaJet Tropis. Amano et al. instead opt for a microneedle approach — a tiny needle, only one fiftieth of an inch in length (0.6mm), is used to inject the vaccine solution into the skin. This enables easy and consistent administration.

But the dermis has a lower temperature than does the rest of the body, on average hovering around 91 degrees (33 degrees Celsius) instead of 98 degrees Fahrenheit (37 degrees Celsius). In order to tailor their vaccine to the environment of the dermis, the researchers systematically mutated the non-structural proteins (nsP1-4) of the alphavirus vector. After each mutation, they checked to see the expression levels of the target antigen gene at 91 and 98 degrees Fahrenheit. Amano et al. finally found a mutant version of the RNA —a five amino acid insertion in the non-structural protein 2 of the alphavirus— that functions between 86 and 95 degrees Fahrenheit (30 and 35 degrees Celsius) but is inactivated at 98 degrees and above. They called this new design controllable self-amplifying RNA (c-saRNA).

The rationale for temperature sensitivity given by Amano et al. is threefold: first, more efficient RNA replication in the skin; second, reduction of the risk of aberrant RNA replication throughout the body — if the RNA were to accidentally make its way beyond the dermis, into organs or other tissues, it would simply not be activated, preventing any replication; and third, it may reduce injection-site adverse reactions since excessive inflammation would raise the temperature of the skin and inactivate the vaccine.

To test whether controllable self-amplifying RNA works as intended in practice, the group of researchers exposed mice to an intradermal injection encoding a bioluminescent luciferase enzyme (c-saRNA-LUC). The luciferase enzyme produces light when exposed to lucifern, allowing researchers to track its presence in the body over time. Importantly, the RNA was kept in its “naked” form, without the addition of any lipid nanoparticles or other transfection agents that are usually used to improve uptake. They compared the results to conventional, nucleoside-modified mRNA encoding the same luciferase enzyme.