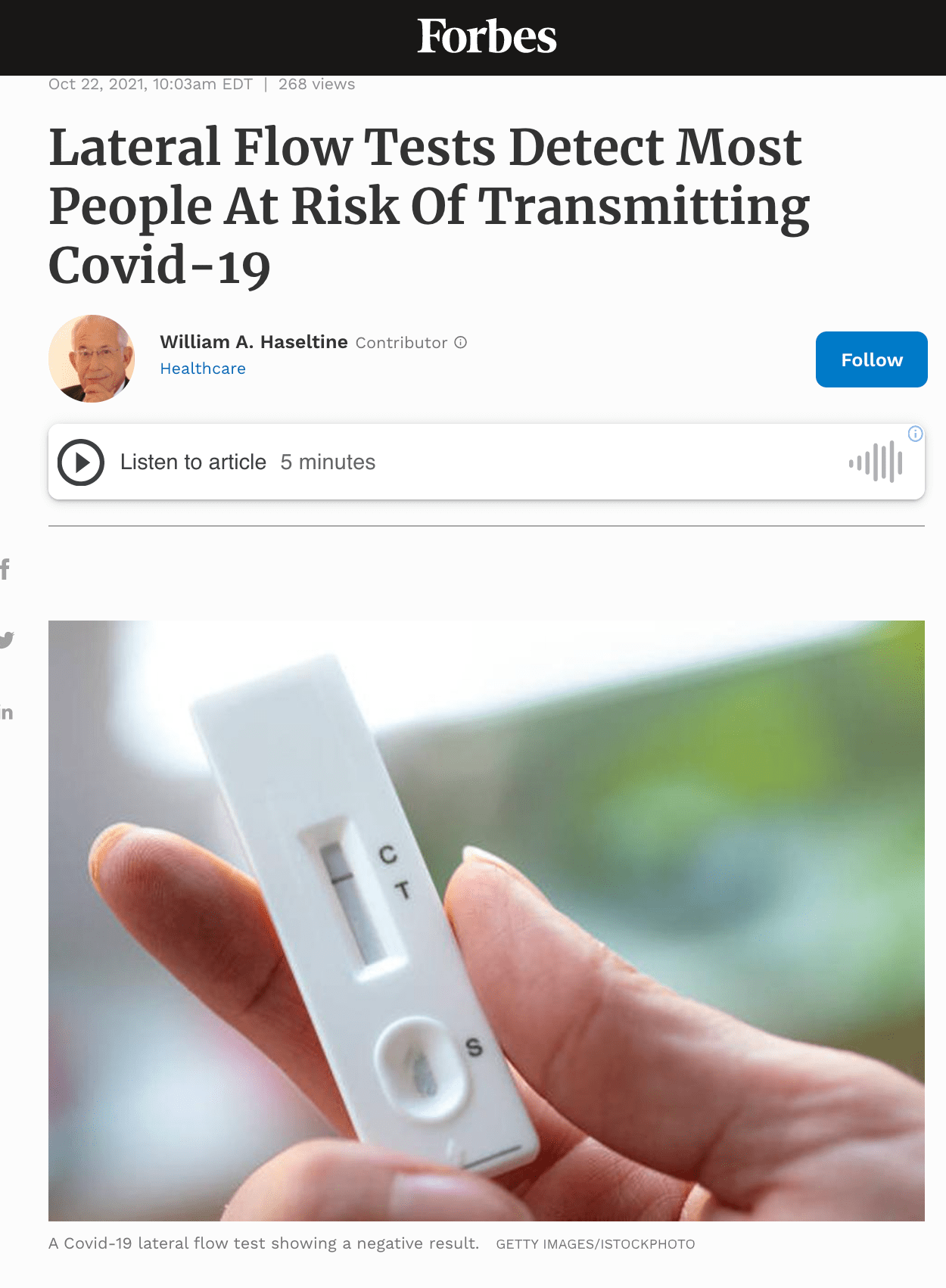 Routine testing to identify those infected followed by efficient contact tracing, and supported isolation is still the most effective public health measure we have to control Covid-19. Yet the US has never embraced testing as the powerful public health tool it could be in containing Covid-19.

Rapid testing has been unfortunately de-prioritized in the US in favor of unrealistic expectations placed on vaccines and has often been mischaracterized as less sensitive and therefore less effective in detecting Covid-19. However, a new study from Brigham and Women’s Hospital, University College of London, and Harvard researchers has found lateral flow tests are more accurate than previously reported and cannot be compared directly to how PCR tests work.

Covid-19 testing has traditionally focused on diagnosing symptomatic individuals using reverse PCR tests. However, mass antigen rapid lateral flow tests have recently been rolled out in several countries for regularly testing asymptomatic individuals as part of public health policy. The tests give a quick result using a device similar to a pregnancy test. It has been reported that in Europe some who live with high risk or immunocompromised individuals, even keep a stash of rapid tests by the front door and ask visitors to test themselves before entering their home.

Validation studies for lateral flow tests have mostly focused on comparing sensitivity, specificity, and predictive values to PCR tests. But the two tests work in different ways, lateral flow tests detect material from the surface proteins of the virus and are very likely to give a positive result when someone is infectious whereas PCR tests detect the virus’ genetic material, which can be present for weeks after a person is no longer infectious.

The study by UCL researchers published in Clinical Epidemiology uses a new formula that recalibrates relative performance statistics from Lateral flow vs PCR validation studies to give absolute sensitivity of lateral flow tests for detecting individuals who are shedding SARS-CoV-2 antigens. Using this formula the researchers found that lateral tests are more than 80% effective at detecting any level of Covid-19 infection and likely more than 90% effective at detecting those who are most infectious when using the test.

Given their rapid results, lateral flow tests are also better suited than PCR tests for identifying and containing the pre-symptomatic spread of the virus. This is particularly critical with many returning to schools, college campuses, offices, and the resumption of live events. This ability to rapidly detect the virus in those most likely to transmit the virus makes rapid tests the “public health gold standard”.

The Biden administration’s announcement to use the Defense Production Act to increase production of rapid tests and invest $1 billion in rapid testing is a welcome change but there is an additional step they could take to encourage routine rapid testing.

Widespread accessibility to rapid tests in the US is presently hampered by a cumbersome F.D.A. process intended for high-tech medical devices. To be approved, the rapid tests must demonstrate that they are nearly as sensitive as the gold standard PCR. tests. But as discussed in this article, rapid tests are the “public health gold standard” and should therefore be regulated as a Public Health Good. President Biden could accomplish this with a simple Executive Order, increasing competition among manufacturers and flooding the market with inexpensive, high-quality rapid tests.

When implementing any kind of testing regime, it is important to consider the impact of false positives. Rapid antigen tests generate relatively few false positives. However, a positive result is more likely to be a false positive when the prevalence of the virus is low. In these cases, I recommend that people take a second PCR test to confirm.

Mass rapid testing is a critical part of any Covid control strategy that we have undervalued throughout the pandemic yet has proven to be successful in multiple countries. This new research only reinforces the need to implement a mass rapid testing public health program supported by effective contract tracing and supported isolation.