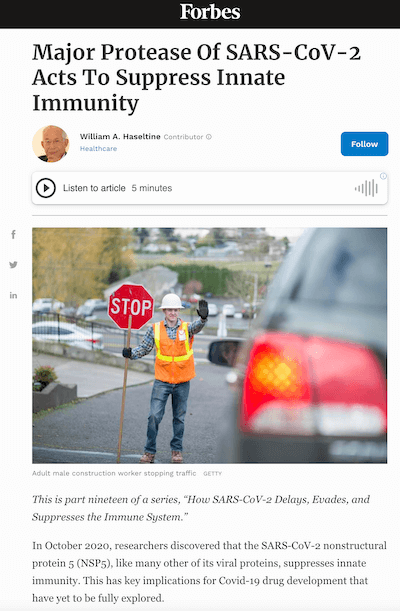 This is part nineteen of a series, “How SARS-CoV-2 Delays, Evades, and Suppresses the Immune System.”

In October 2020, researchers discovered that the SARS-CoV-2 nonstructural protein 5 (NSP5), like many other of its viral proteins, suppresses innate immunity. This has key implications for Covid-19 drug development that have yet to be fully explored.

Though some aspects of the Covid-19 pandemic are comparable to previous encounters between humanity and a lethal infectious disease, much about the virus that has claimed the lives of so many in the past two years is without known precedent. Among these are the novel mechanisms SARS-CoV-2 has developed for antagonizing the immune system, which scientists have documented and endeavored to understand since the pandemic began. One critical piece of this highly complex puzzle, outlined by Wu et.al in Signal Transduction and Targeted Therapy in October 2020, is the immunosuppressive function of NSP5, otherwise known as the main protease.

The function of NSP5 as a protease, not just in SARS-CoV-2 but other viruses, are well-known. As the main protease, NSP5 drives the enzymatic processes necessary for the virus to reproduce itself, chewing up chunkier polyproteins into discrete nonstructural proteins that assist in the virus’ program of immune suppression. Protease inhibitors based on NSP5 were developed by drugmakers long before SARS-CoV-2, some of which have been approved as treatments for Covid-19. But Wu et.al have discovered that in addition to its protease function, NSP5 is also active in evading and suppressing the immune system. The multifunctionality of this protein increases its appeal as a drug target, as treatments that inhibit the protease function may do the same for its immunosuppressive capacities.

SARS-CoV-2 encodes many proteins in its viral genome. One of the most remarkable aspects of these proteins is they have multiple functions, both for enhancing viral replication and counteracting the immune system from multiple angles. The majority of these points of interference coalesce along the signaling pathways that lead to induction of interferon, a protein key to activating the natural (innate) immune response. When interferons detect invading pathogens, they mobilize production of hundreds of interferon-stimulated genes that spring surrounding cells into defense mode and kickstart the adaptive immune response. But when interferon induction and signaling is blocked, pathogens can hijack cellular machinery for their own purposes and replicate for a time all but unnoticed, as is the case with SARS-CoV-2.

The study conducted by Wu et.al was an early contribution to the body of literature on the immunosuppressive mechanisms of SARS-CoV-2 that has grown considerably since. Though initially promising interferon-based drug treatments for Covid-19 precipitated too many adverse effects in clinical trials to be brought to market, their success at reducing viral replication compelled researchers to identify with greater precision how the virus delayed and inhibited the interferon response.

Figure 1. “Schematic representation of SARS-CoV-2 Mpro antagonizing antiviral immunity.”“MAIN PROTEASE OF SARS-COV-2 SERVES AS A BIFUNCTIONAL MOLECULE IN RESTRICTING TYPE I INTERFERON ANTIVIRAL SIGNALING” HTTPS://WWW.NATURE.COM/ARTICLES/S41392-020-00332-2
Wu et.al also examined the effects of NSP5 on RIG-I (retinoic acid-inducible gene I), the RNA helicase that initiates one of the primary interferon induction pathways by looking for recognizable patterns in viral RNA. RIG-I is triggered by double-stranded RNA, the obligate replication immediate for SARS-CoV-2. Once RIG-I picks up on viral RNA, its activation is catalyzed by a ubiquitination process involving K63 (lysine-63) and mediated by TRIM25 (Tripartite Motif Containing 25). Wu et.al speculate that NSP5 might reduce K63-linked ubiquitination of RIG-I as another means of blocking interferon.

Additionally, the study highlights SARS-CoV-2 NSP5 interactions with the second leg of the interferon induction pathway, which precipitates the release of interferon-stimulated genes. Wu et.al show that NSP5 likely promotes degradation of STAT1 (Signal Transducer and Activator of Transcription 1) and delays interferon-stimulated gene production, allowing the virus to replicate to higher titers in the meantime.

SARS-CoV-2 NSP5 is worthy of further study for numerous reasons. One, as illustrated by Wu et.al, is its propensity for suppressing interferon. Another is its multifunctionality. This makes it a compelling target for drugmakers developing treatments that debilitate SARS-CoV-2 before it can debilitate us. Wu et. al found the protease function was not needed because they introduced mutations to the active site. Nonetheless, it will be worthwhile investigating whether protease inhibitors also block the immunosuppressive activity of NSP5.