Moral Injury Is Similar in Healthcare Workers and Veterans

Article in the Press by William A. Haseltine 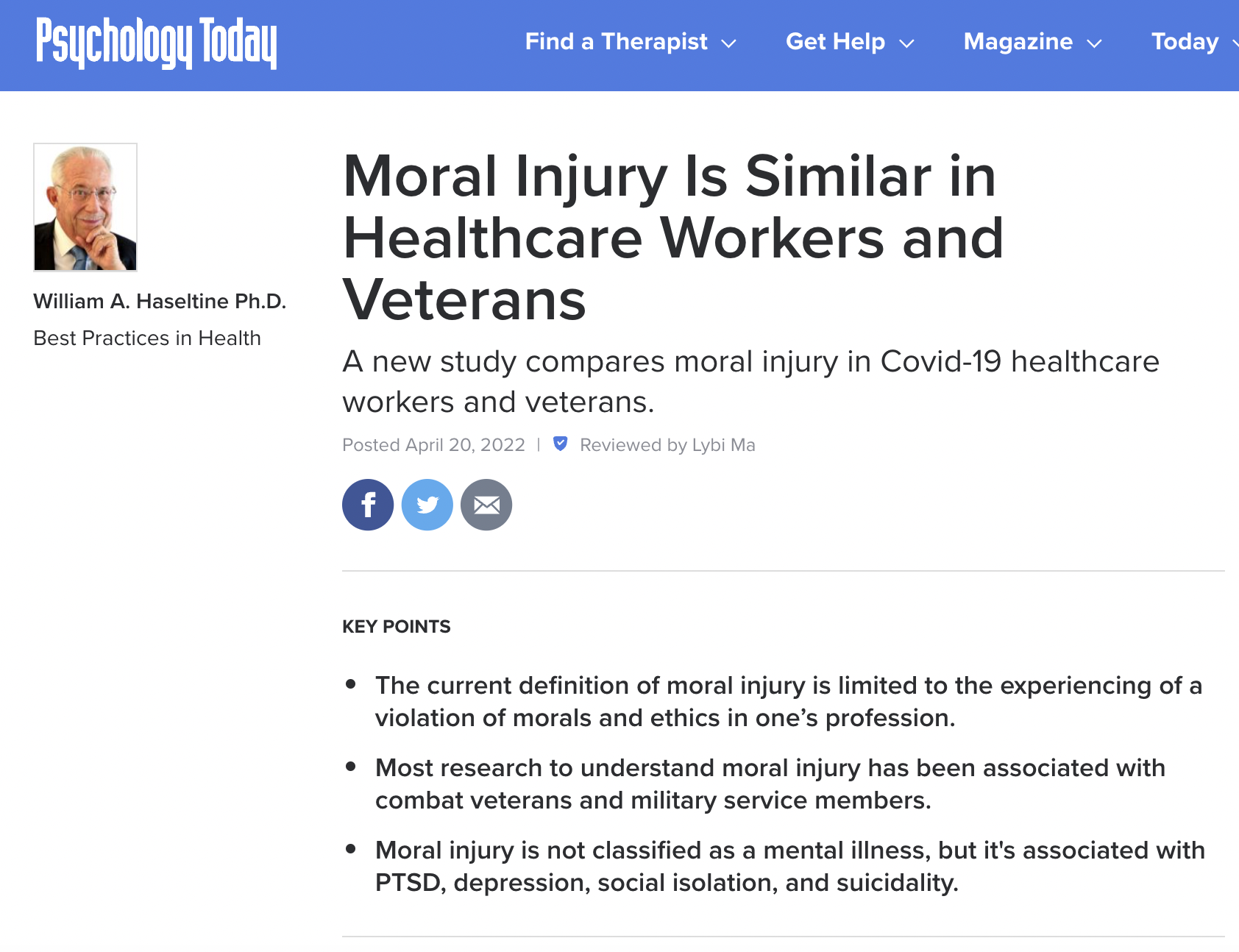 A new study demonstrates that potential moral injury is similarly high among Covid-19 healthcare workers and combat veterans who served post-9/11. Moral injury is defined as the strong cognitive and emotional response that can occur following events that violate a person’s moral or ethical code or when they feel betrayed by authority figures. It should be distinguished from the term ‘burnout’ that is often used to describe the effects of ongoing stress in the workplace, but the two conditions can overlap. While moral injury is not classified as a mental illness, it is associated with post-traumatic stress disorder, depression, social isolation, and suicidality and should be treated seriously.

The study published in the Journal of General Internal Medicine was a collaboration between Duke University, Vanderbilt University, and the Department of Veterans Affairs. The researchers relied on data from a study of 618 post-9/11 combat veterans and a separate survey of 2,099 people working in health care during the Covid-19 pandemic.

The study builds on a decade of research into moral injury among veterans by comparing data from the Post-Deployment Mental Health Moral Injury (PDMH-MI) study with findings from the Healthcare Worker Exposure Response and Outcomes (HERO) registry. The term potential moral injury is used as there is currently no threshold for when an event meets the criteria for moral injury and uncertainty exists about how to measure the syndrome in a clinical setting.

Most research to understand moral injury has been associated with combat veterans and military service members. This is likely due to the fact that the nature of war and combat create situations where people may have experiences that contradict their values. Clinical psychiatrist Jonathan Shay first coined the term when he noted that some American soldiers who had experienced traumatic events in Vietnam returned with profound changes to their character. Their symptoms shared similarities but were different from what would normally be recognized as PTSD. After further research, he discovered that their symptoms were predominantly triggered by events that violated a soldier’s moral code rather than the experience of narrowly escaping death. I have written extensively about this in Covid Related Post Traumatic Stress Disorder (CV-PTSD): What It Is and What To Do About It.

Further research into how moral injury affects other professions and the general population, as well as how it can be measured in a clinical setting is sorely needed. The current definition of moral injury is limited to the experiencing of a violation of morals and ethics in one’s profession. Yet many members of the public feel a deep sense of betrayal by the governments and public health authorities who failed to protect them from the worst effects of the virus. In particular, those who are immunocompromised or at high risk for severe Covid-19 feel betrayed and left behind by the continued shedding of policies such as mask mandates that are occurring globally and the false characterization of the Omicron as mild. Long Covid sufferers may not feel the risks of the virus were adequately communicated.article continues after advertisement

Doctors and nurses have felt a deep sense of betrayal and hypocrisy from the public during the pandemic. Public tributes such as the nightly cheering and clapping and other signals of hero-worship were juxtaposed with a refusal to wear masks, get vaccinated to relieve the burden on health systems, and take other key public health precautions.

Lead study author Jason Nieuwsma, a researcher with the VA and the Department of Psychiatry and Behavioral Sciences at Duke University School of Medicine, stated: “It is sobering to see how many health care workers are troubled at a moral level because of their work experiences during the pandemic. This may help us to understand some of the current challenges facing health care systems across the country,”

Senior study author Keith Meador, a professor in the departments of Psychiatry, Religion, and Health Policy at Vanderbilt, stated that: “Examples we saw most were individuals being expected to do things that made them feel questionable about their participation. In the health care context, that may look like not being able to provide the level of care one would like to provide due to the complexities of the ongoing pandemic. As a result, HCWs were vulnerable to the consequences of potential moral injury and reduced quality of mental health, similarly to what we’ve seen in post 9/11 veterans.”article continues after advertisementhttps://b23de0b13529ee4c48f8d909053b1909.safeframe.googlesyndication.com/safeframe/1-0-38/html/container.html

Meador has identified collaboration between chaplains and mental health providers as a potential opportunity to improve the mental health of healthcare workers. While additional and alternative forms of mental health support are surely welcomed by healthcare workers, systematic and institutional change within healthcare systems is also required to ensure that workers are not placed in positions that cause conflicts with their morals and ethics.

Pandemic preparedness funding needs to be consistent so that hospitals can be well resourced and fully equipped and so that staff receives appropriate ongoing training to deal with crises. Physician shortages need to be addressed through creative solutions. Federal and local public health policy needs to account for the burden on health systems when cases remain steady but hospitalizations rise.

The American Psychiatry Association recommends putting systems in place like an anonymous hotline that empowers and encourages healthcare workers to speak freely about the stressors they face and to advocate for their own health as well as that of their patients. This could be a useful strategy for addressing moral injury, but only if executive leadership is willing and ready to implement the feedback received.

Finally, there is a dire need for more legislation like the recently passed Lorna Breen Act, which provides funding for training healthcare providers on suicide prevention and behavioral health. Healthcare workers were already under immense strain prior to the pandemic. As we enter its third year, we must make the mental health of healthcare workers a priority.