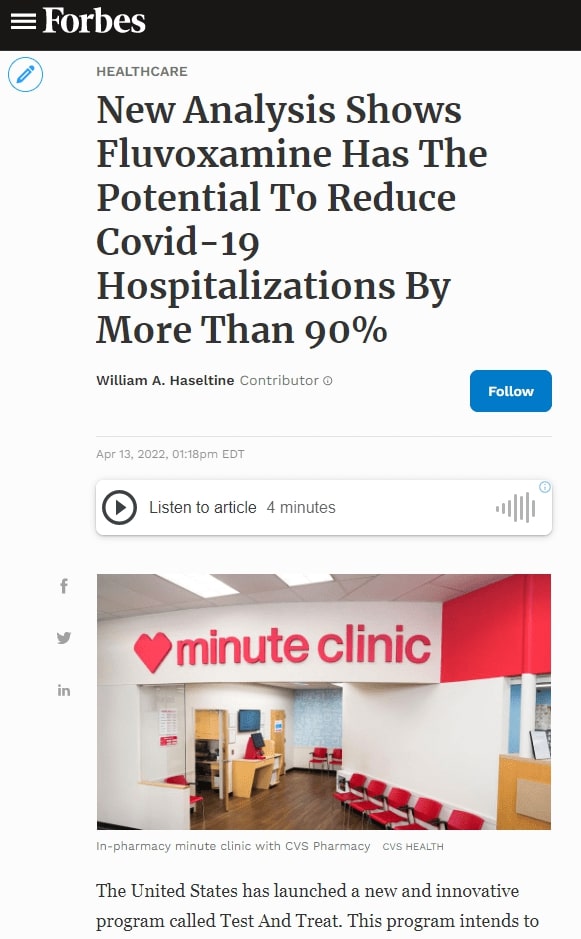 The United States has launched a new and innovative program called Test And Treat. This program intends to solve one of the most immediate problems with Covid-19 cases: the prevention of symptomatic progression by taking drugs in a timely manner. Antiviral drugs must be used early in an infection to reduce disease outcomes. At present, to receive Covid-19 treating drugs, a patient must test positive, go to a doctor, receive a prescription, and fill the prescription at a pharmacy, all of which could take days or even weeks.

Test And Treat aims to shorten this process, by having a patient test for Covid-19, receive a prescription, and fill that prescription all in one location, for the most part in pharmacy-based clinics. This reduces the several day-long process of receiving antivirals to a single trip to the pharmacy. A current roadblock to the nationwide implementation of Test And Treat is the accessibility and convenience of antiviral drugs.

One drug, remdesivir, must be administered intravenously at an infusion center. Another treatment is paxlovid, which is orally administered but is limited principally by the long list of exclusions for other medications, including widely prescribed statin drugs for lowering blood pressure. The third treatment, molnupiravir, has not shown high efficacy and has the additional drawback, as a mutagen for SARS-CoV-2, of speeding the creation of new and more viral forms of the virus.

The drug fluvoxamine may address many of these issues. Fluvoxamine is inexpensive, orally-administered, FDA-approved drug, with a strong safety profile, and widely available worldwide. A recent meta-analysis of fluvoxamine clinical trials suggests that it may have a powerful effect on reducing hospitalization. Collectively, trials found that fluvoxamine’s probability of reducing the risk of hospitalization is between 94.1 and 98.6%, which would be remarkable if reproduced at a large scale.

Fluvoxamine is a selective serotonin reuptake inhibitor (SSRI), originally designed to treat depression. A recent meta-analysis by Lee et al. reviews three clinical trials of fluvoxamine. Of the 19 trials Lee et al. found searching the World Health Organization trial database, ten were retained after filtering for duplicates. Of those ten, seven were excluded because they were either still recruiting, focusing on inpatient, suspended, or had not begun. The process left three trails of 2,196 outpatients. All three trials were placebo-controlled randomized trials with unvaccinated, symptomatic adults PCR-test confirmed to be infected with SARS-CoV-2. We note that all trials predate the Delta and Omicron variants. Between the three trials and over 2,000 outpatients, Lee et al. found that the overall probability of association with reduced hospitalization ranged from 94.1% to 98.6%.

We would be remiss not to mention the limitations of this meta-analysis. First, the STOP COVID 1 and STOP COVID 2 trials only account for 699 patients. The third trial, TOGETHER, accounts for 1497, which yields a definite skew towards their results. Second, The STOP COVID 2 trial was terminated before its intended close date due to lower than expected recruitment. Third, these trials did not examine partially, fully, or booster-vaccinated outpatients, who have a lower risk of hospitalization. Further trials to address these concerns would be welcome.

There are also drawbacks to fluvoxamine itself. As an SSRI, there are several potential side effects from regular use, but none have precluded the widespread use of fluvoxamine as an antidepressant.

Despite any shortcomings of the drug or this analysis, it is ultimately worth it to examine new tools in our fight against Covid-19. Infections will continue and new variants will arise, likely causing swells of cases for at least the months to come. If we can prevent hospitalizations with a drug that is cheap, readily available, and already in existence, that is an avenue we should heavily consider.