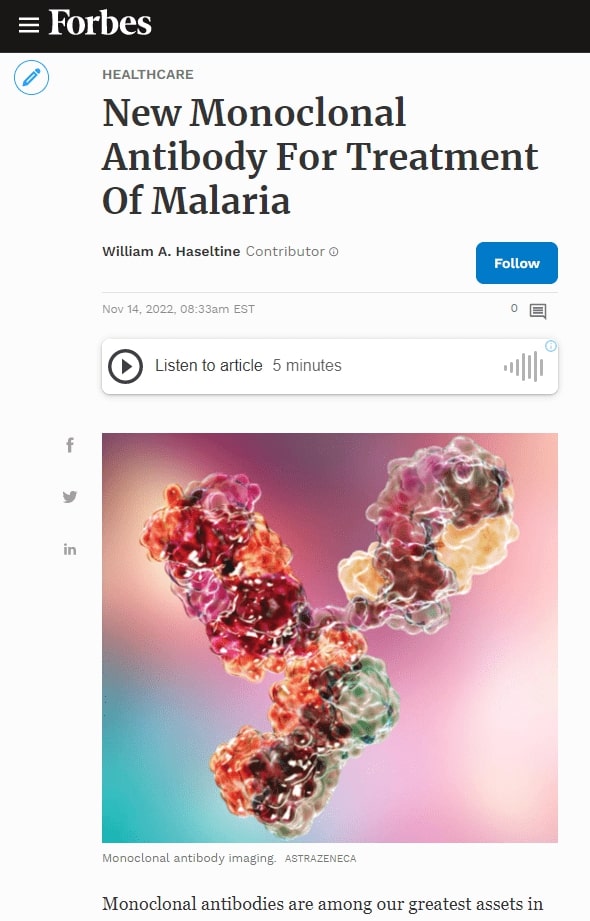 Monoclonal antibodies are among our greatest assets in treating and preventing virus-induced disease. While the spotlight has focused squarely on Covid-19 monoclonal antibodies throughout the pandemic, antibody candidates for other severe pathogens have also made strides forward. Here we describe a new antibody candidate that neutralizes a parasitic foe that has circulated much longer than SARS-CoV-2 and is responsible for hundreds of thousands of deaths annually: Malaria.

While the incidence of Malaria is much lower than 20 years ago, poverty-stricken countries, particularly in Africa, continue to struggle with the disease. Progress has halted in recent years due to the lack of effective treatments for the disease. Existing monoclonal antibody treatments are few and far between, and vaccines are relatively ineffective. While newly emerging vaccines backed by the WHO show more promise, Malaria expert Dr. Umberto D’Alessandro notes we should use all the tools we can gather, specifically in reference to monoclonal treatments.

A new study by Kayentao et al. from the Mali Malaria mAb Trial Team discusses the phase two clinical trials of the CIS43LS antibody, which is already demonstrating protection against controlled malarial infection in phase one.

The new antibody was discovered back in 2018 by Kisalu et al. of the National Institutes of Health. It was isolated with other antibody candidates from humans vaccinated with the malarial vaccine RTS,S/ASO1. Protection from this vaccine wanes over time, but the researchers discovered that the isolated antibody CIS43 demonstrated extended protection against malaria in mice.

They found that the antibody preferentially binds a junction between two critical domains of the malaria parasite, resulting in remarkably high binding affinity and the inhibition of cleavage, rendering the pathogen inert. The antibody targets the sporozoite form of malaria, which is the infective stage. Figure one demonstrates how the antibody holds the sporozoite in the uncleaved form at the junctional region. The parasite cannot bind and spread within the human liver due to the lack of cleavage. This antibody target is notable as it’s the same target used in the new GSK malarial vaccine: Mosquirix.

The antibody was also modified with an LS mutation to increase its half-life. First discovered by Zalevsky et al. in 2010, LS mutations refer to a set of two mutations in an antibody, M428L and N434S. These two mutations decrease the antibody dissociation rate and increase Fc binding affinity to human receptors 11-fold. In various experiments, LS mutations to the Fc receptor yield a 2-to-3-fold increase in antibody half-life, which has led to LS mutations becoming common practice among monoclonal antibody developers to extend the efficacy of their treatments.

CIS43LS then underwent phase one trials, described in an August 2021 paper by Gaudinski et al. While the trial was relatively limited with 25 participants, Gaudinski and colleagues found that none of the participants who received CIS43LS displayed malarial parasitemia 21 days after controlled human malarial infection. These results were encouraging, as the RTS,S/ASO1 malarial vaccine’s efficacy ranges from only 30-60%.

The Mali Malaria mAb Trial Team expands Gaudinski’s controlled phase one trial to a more uncontrolled setting in phase two. 330 adults across Mali received either 10 mg of CIS43LS per kilogram of body weight, 40 mg, or a placebo over a six-month period.

The final efficacy of the 40 mg treatment, as compared to the placebo, was 88.2% within a 95% confidence interval, while the 10 mg treatment was slightly lower at 75%.

The only notable side effect was the risk of moderate headache in the 40 mg group, which was reported 3.3 times as often as the placebo group. Aside from headaches, no significant side effects were noted, and no safety concerns were observed.

Upon approval, the greatest challenge for the antibody will be keeping the production cost low, as those needing the treatment most reside in lower-income nations. Current technologies allow monoclonal antibodies to be produced at $200 and $250 per gram. Ensuring the treatment reaches those that need it most without a high financial barrier to entry is crucial if the drug is to be successful.