New Monoclonal Antibody Fully Approved For The Treatment Of Covid-19 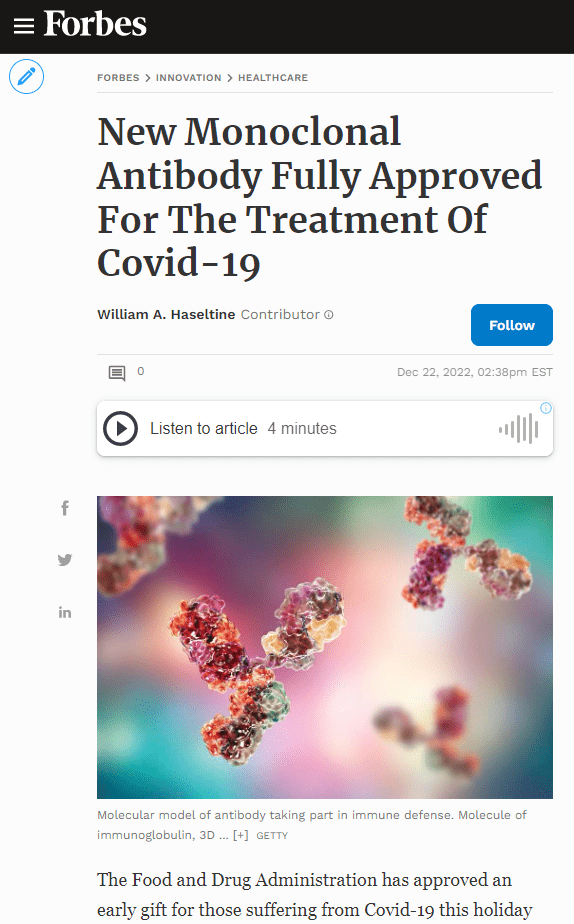 The Food and Drug Administration has approved an early gift for those suffering from Covid-19 this holiday season. Tocilizumab, branded Actemra by pharmaceutical company Genentech, is a monoclonal antibody now approved for treating Covid-19 in hospitalized adult patients in moderate to severe conditions. All treatments to this point of the pandemic were only temporarily approved via emergency use authorization, speaking to the value of Tocilizumab. Here we discuss how the antibody was discovered and how it works.

Unlike many monoclonal antibody treatments we discuss, Tocilizumab has a long history dating back 25 years. Clinical development of the antibody began in 1997 by Chugai Pharmaceuticals in Japan to treat rheumatoid arthritis. Chugai Pharmaceuticals and Genentech are now under the Roche Group umbrella, a Swiss multinational healthcare company.

The researchers at Chugai Pharmaceuticals found that specific mouse antibodies contained anti-human IL-6 receptors. Interleukin-6, or IL-6, is a secreted cytokine protein expressed by white blood cells. In terms of disease, IL-6 stimulates inflammatory processes when the body is exposed to various pathogens and clinical conditions such as diabetes, multiple sclerosis, and rheumatoid arthritis.

IL-6 inhibition sufficiently blocks inflammation without inhibiting other immune defenses against infection. Contrary to popular belief, many of the classic symptoms we experience when we are sick are not directly caused by an invading pathogen but rather consequences of our immune system fighting off the pathogen.

Inflammation is one of the most prominent causes of body pain, fatigue, fever, rash, and other significant symptoms most endure during sickness. In severe cases, inflammation may cause severe pain, lack of appetite, and severe headaches and chills.

To produce the drug en masse, Chugai Pharmaceutical used genetic manipulation of host cells. They encoded the genes that code for tocilizumab production onto a human host T-cell. The encoded T-cell is then transfected into Chinese hamster ovary cells. These cells are then manipulated to express countless tocilizumab genes, creating a master that can be copied several times.

In 2005, Tocilizumab was approved in Japan to treat Castleman’s disease, a rare disorder involving hyperactive immune systems and chronic hyper-inflammation. By 2010, the drug was approved in the United States and the European Union for the treatment of rheumatoid arthritis.

More recently, the drug was approved via emergency use authorization by the FDA in June 2021 for the treatment of Covid-19 in hospitalized patients receiving systemic corticosteroids and require supplemental oxygen, non-invasive or invasive mechanical ventilation, or extracorporeal membrane oxygenation (ECMO).

Its full approval by the FDA is a testament to the drug’s effectiveness in hospitalized patients. While much of the world is content to declare the pandemic over, case numbers and hospitalizations beg to differ. We must continue to search for every available treatment and pursue their distribution with the same urgency we had in the early months of the pandemic. In the next article, will discuss tocilizumab’s efficacy for the treatment of Covid-19 leading to its approval.