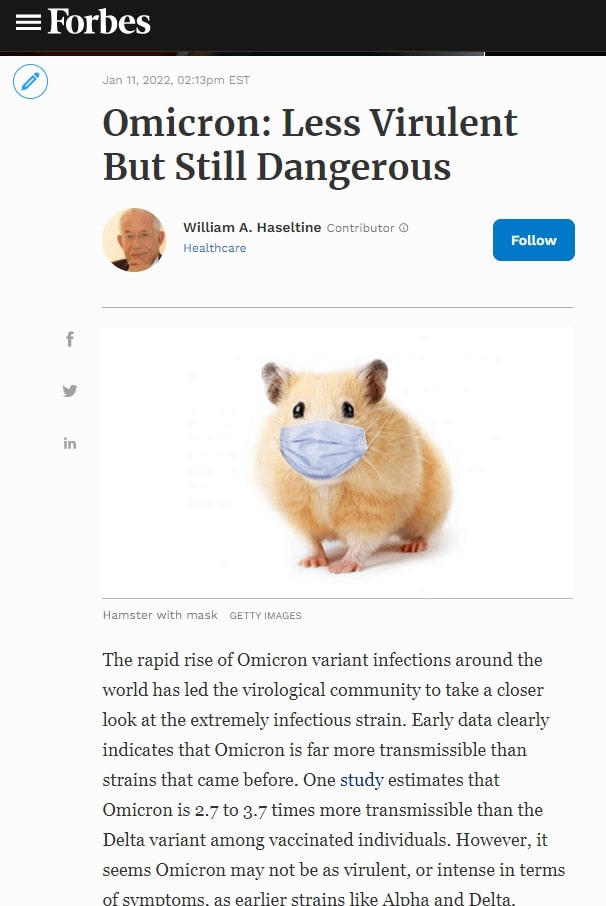 The rapid rise of Omicron variant infections around the world has led the virological community to take a closer look at the extremely infectious strain. Early data clearly indicates that Omicron is far more transmissible than strains that came before. One study estimates that Omicron is 2.7 to 3.7 times more transmissible than the Delta variant among vaccinated individuals. However, it seems Omicron may not be as virulent, or intense in terms of symptoms, as earlier strains like Alpha and Delta, particularly in vaccinated individuals. The Moderna, Pfizer, Johnson & Johnson, and AstraZeneca vaccines appear to protect against severe disease consequences. However, it is likely that in the unvaccinated, Omicron will still cause severe illness, and as such should not be taken lightly. Director-General of the World Health Organization Tedros Adhanom Ghebreyesus notes that “While Omicron does appear to be less severe compared to Delta, especially in those vaccinated, it does not mean it should be categorized as mild.”

Omicron’s infectivity stems from a couple of factors. Firstly, it appears to overcome full vaccination and booster shot protection against infection, meaning the virus has more hosts at its disposal. Secondly, Omicron replicates extremely rapidly in the nasopharynx, more so than the strains that came before. Thirdly, Omicron transmits from asymptomatic individuals at a much higher rate than previous strains. For the Delta variant, asymptomatic transmission rates were between 1% and 2.6%. The rate for Omicron is over 30%, according to a study by Garrett et al.

A recent study by Diamond et al. aimed to detail the exact pathogenic nature of Omicron in an effort to understand its greater impact on humanity. Their method was simple. They infected hamsters and mice with the Omicron variant and compared the relative damage caused by the strain to data gathered from rodent subjects previously infected.

They found the Omicron variant to be overall less virulent than previous strains. In particular, rodent subjects did not experience unhealthy weight loss, which was observed in the earlier subjects. Additionally, the viral burden in the upper and lower respiratory tract was 10 to 100-fold lower than Beta variant-infected mice after only three days post-infection. Viral load in nasal turbinates was nearly 1000-fold lower in Omicron-infected subjects.

Four additional studies corroborate these findings, including three others investigating Omicron in hamsters and one in mice. All three found that Omicron induced more moderate disease than Delta or earlier strains. We note caution in the extrapolation of animal models to human virus behavior, but these findings are significant.

How is this possible? It seems this strain has substantial differences in its pathogenetic process that lead to differing symptomatic outcomes. Omicron is localized to the upper respiratory system: nose, throat, windpipe, and upper lung. Chi-wai et al. found that Omicron infects and multiplies 70-times faster in the upper airways than Delta, supporting a transmission advantage. However, lower lung titers dropped as much as 10-fold in the lower respiratory tract as early as 48 hours post-infection. This data suggests that Omicron is custom-suited to infect rapidly, but does not yield as severe respiratory symptoms as seen in previous variants.

This difference between Omicron and its ancestors could be attributed to a mechanistic difference in the Spike protein. The SARS-CoV-2 Spike protein is cleaved into two subunits. This is caused by the Spike furin cleavage sites and attenuates cell fusion. While Omicron contains a cleaved Spike as well, recent studies indicate that it may be less efficient than earlier strains.

Dr. Ravindra Gupta of Cambridge University suggests that this may be why we observe less significant lung damage in Omicron than in previous variants. He notes that the reduced cleavage leads to Omicorn being less likely to bind a lung protein called TMPRSS2. This protein is common in the lower respiratory tract, but not so often in the higher airway, potentially explaining the stark difference in virus load.

This is without a doubt a positive sign. More people are being infected today than ever before during the pandemic. This data suggests that these infections will be less harsh on the respiratory health of the patients, though less deadly does not equate to not deadly.

There are still stark differences in the disease outcomes of vaccinated individuals as compared to the unvaccinated. While not fully researched, there is some residual protection granted by adenovirus and mRNA vaccines. Those that are unvaccinated are much more likely to be hospitalized or succumb to Covid-19, including with the slightly less virulent Omicron variant. Additionally, whether Omicron is more or less transmissible in the unvaccinated remains an open question. The vast majority of infections are among the unvaccinated and hospitalizations follow a similar trend.

In fact, Omicron is beginning to make a larger mark on hospitalizations and deaths. The sheer amount of infections, which the daily average now counts nearly 700,000 in the United States, means that hospitals are filling up and deaths will come. The elderly and immunocompromised are at particular risk, as decreased virulence in Omicron would likely still overwhelm a lowered immune system.

In children, cases of SARS-CoV-2 infection have sharply risen as well in the wake of the Omicron variant. CDC Director Rochelle Walensky mentioned in a previous briefing that “this is the highest number of pediatric hospitalizations we’ve seen throughout the pandemic.” Omicron infections in children are complicated by lower vaccination rates in those under 18, due to parent hesitancy and lack of authorization by the FDA until recent months. Recent reports even indicate that SARS-CoV-2 infections are associated with increased diabetes risk among youth, creating even more danger for unvaccinated children during the Omicron wave.

Hospitalizations are spiking in the United States, at their highest rate since January of 2021, and will only continue to rise. Deaths tend to lag roughly a month behind infections and hospitalizations, so an increase should be expected in the coming weeks.

We emphasize that while Omicron may be less virulent than previous strains, everyone should do what they can to avoid infection. As much as possible, continue social distancing and mask-wearing efforts. In particular, schedule your vaccinations. While less effective against Omicron at preventing infection, reinfection, and illness, vaccines still seem to protect against severe disease as compared to unvaccinated individuals. Now is not the time to let our guard down, especially as this round of high-volume infections only creates greater opportunity for new and potentially more virulent variants in the months to come.