Origin Of Virus Variation: Real-Time Evolution Of SARS-CoV-2 In An Immunocompromised Patient 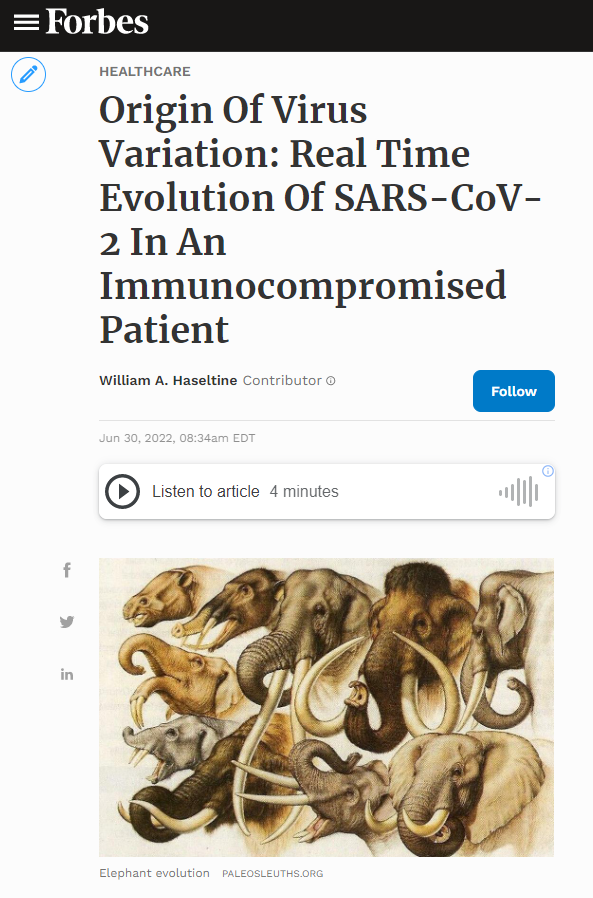 Evolution optimizes all creatures, from viruses to elephants, to their environment. Where do new variants come from, especially Omicron which is so different from previous variants? There may be a clue in a long study of an immunocompromised patient.

Most cases of Covid-19 last roughly two weeks from infection to symptoms subsiding. The timeline may be slightly longer or shorter from person to person, but the general timeframe of infectivity to the development of symptoms is typically congruent. However, in some rare cases, individuals may be infected for months. These patients are often immunocompromised, and their immune systems cannot clear the virus and end the infection.

As the virus remains within the body, it sometimes adapts to the weakened immune system of the host, developing new mutations to equip itself against host defenses better. This is one of many avenues for new variants of SARS-CoV-2 to emerge. Here we analyze this event in a long-term Covid patient in Austria and the mutations developed by her infection with SARS-CoV-2.

The woman in question was treating lymphoma with immune-suppressing drugs when she became infected in late 2020 before most variants of concern or interest were circulating. Rather than dissipating in two or three weeks, the infection remained for over seven months, despite mild symptoms.

Throughout the infection, Dr. Sissy Sonnleitner would collect over twenty samples for genetic sequencing. They specifically analyzed the Spike protein, as this region of the virus has an immediate impact on infectivity and immune evasion, two characteristics crucial to the success of a viral variant.

Sonnleitner found roughly twenty mutations throughout infection, though not all persisted. Some samples included transient mutations that were not identified in later samples. Other mutations persisted in a few following samples, and some lasted through the course of infection. Sonnleitner was observing viral Darwinism in real-time.

Most notably, Sonnleitner noted mutations that would later be found in Omicron strains and other variants of concern. Those later found in Omicron are highlighted by E484K, P681H, and deletions at positions 141-144.

Below is a detailed comparison between the Spike proteins of the Austrian patient and the first Omicron strain BA.1. We note that mutations outside of the Spike protein are as important to viral characteristics such as immune evasion, virulence, and pathogenesis, but those mutations in the Austrian woman’s samples were not included at this time.

The SARS-CoV-2 virus adapts to survive. If it had remained the original Wuhan virus without mutation, it likely would have been extinguished by immune memory from previous infections, vaccines, and antibody therapies. However, it mutated to overcome these immune defenses, leading to waning vaccine immunity and mass reinfections.

Within an immunocompromised person, the mutation process is accelerated because the virus has extended exposure to a weakened immune system, like a boxer practicing on a punching bag before their next fight. This environment allowed for mutations that rapidly enhanced infectivity and immune evasion, like the well-known mutations N501Y and E484K, which were later noted in various significant strains.

This is but one example of potentially thousands of months-long cases of Covid-19. An effective surveillance method for emerging variants that we have championed for over a year is monitoring these immunocompromised patients. Seven mutations found in the Austrian woman were later found exclusively in Omicron strains.

There are tens, if not hundreds of millions of immunocompromised people worldwide who are in danger of long-term Covid infection. Local health officials should be notified when an infection lasts more than a month in one of these hosts, and samples should be extracted regularly for sequencing. We know of at least one study at Harvard University tracking long-term immunocompromised patients to be on the lookout for the next Omicron-like variants, which may trigger successive waves of the pandemic with increased infectivity and virulence.