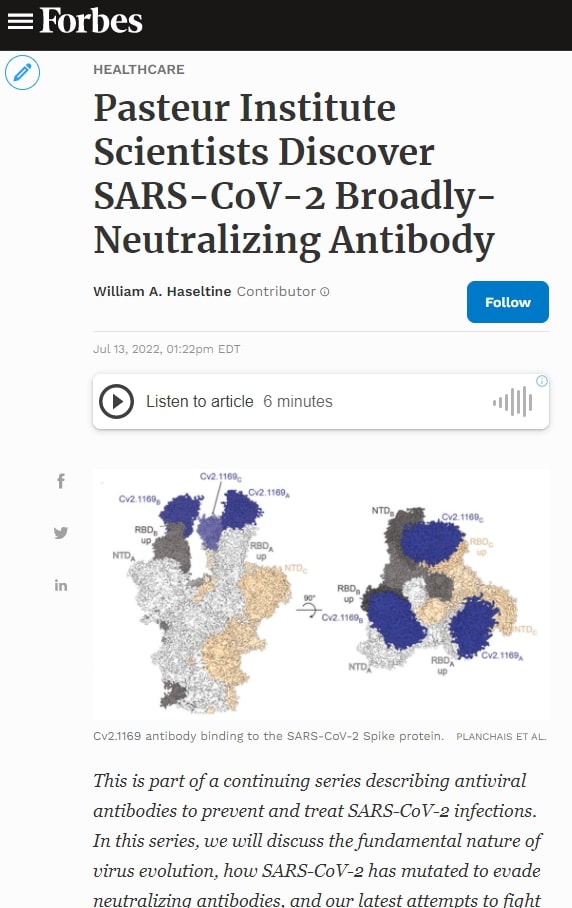 From the early days of the Covid pandemic, monoclonal antibodies have been billed as an effective means to treat and possibly prevent SARS-CoV-2 infections. The originally sparkling promise has been substantially tarnished as one monoclonal drug after another has succumbed to the rapid variation of the SARS-CoV-2 virus, rendering them essentially useless for treatment.

Now a global search for new antibodies that hone in on regions of the virus Spike protein that are required for effects and, therefore, resist change is in effect. We have already discussed one such antibody, 35B5, as described by a group of virologists from China. Here we discuss another such antibody as described by scientists at the Pasteur Institute in Paris, France.

Isolation of the Virus

As described by Planchais et al. in the Journal of Experimental Medicine last month, the two antibodies Cv2.1169 and Cv2.3194 carry a notable headline: they potently neutralize both Omicron BA.1 and BA.2. Planchais et al. observed and cloned 102 human SARS-CoV-2 Spike monoclonal antibodies from the memory B cells of 10 convalescent Covid-19 patients. Most of the 102 mAbs bound to the S2-region of the Spike protein, meaning non-binding to the receptor-binding or N-terminal domain. None of these S2 mAbs were neutralizing against the Wuhan strain in vitro. Roughly one-third of the remaining receptor-binding and N-terminal domain mAbs neutralized SARS-CoV-2 in vitro. The most potent of these were Cv2.1169 and Cv2.3194.

Further analyzing both antibodies, the researchers found that both were fully active against previous variants of concern Alpha, Beta, Gamma, and Delta, as well as the earliest strains of Omicron BA.1 and BA.2. Between the two, 1169 most potently neutralized all variants from the Wuhan strain up through BA.2.

The researchers examined 1169 in greater detail as it neutralized recent variants more effectively than 3194, including Delta+, BA.1, and BA.2. Planchais et al. further enhanced 1169 with a purified J-chain containing IgA dimers as 1169 as a monomeric IgA antibody displayed muted effects against SARS-CoV-2. In other words, they greatly enhanced its neutralization against early and later variants by modifying the structure of the cloned antibody.

The Cv2.1169 antibody showed positive therapeutic effects during in vivo mouse and hamster SARS-CoV-2 infection models—small rodents infected with SARS-CoV-2 mirror the disease course of a mild-to-moderate case of Covid-19 in humans.

A single injection of Cv2.1169 significantly reduced pulmonary viral infectivity and RNA levels. Intra-lung viral infectivity and RNA loads also reduced dramatically after using the 1169 antibody. These results were repeated with mice infected with Beta, among the most pathogenically severe variants to circulate. The mice made a full recovery after treatment with 1169.

The Cv2.1169 antibody binds in a set of three to the trimer of the SARS-CoV-2 Spike protein receptor-binding domain in the up configuration.

Inspection of the GISAID database shows that mutations involving the binding sites for Cv2.1169 occur but in relatively low frequency. However, there is more immediate cause for concern as some binding sites are altered in the most recent iterations of Omicron BA.4, BA.5, and BA.2.75.

Whether these changes are significant enough to cause later Omicron variants to escape Cv2.1169 is unknown, so we implore further research to be conducted on Cv2.1169 to analyze the neutralization of newer strains.

This is but one of many potential broadly neutralizing antibodies that could work against currently circulating and future variants. We will continue to cover these antibodies as they are released because rather than playing catch up with SARS-CoV-2, we must start future-proofing our treatment arsenal as variants continue to arise.