Progress In The Search For Broadly Neutralizing Monoclonal Antibodies IV 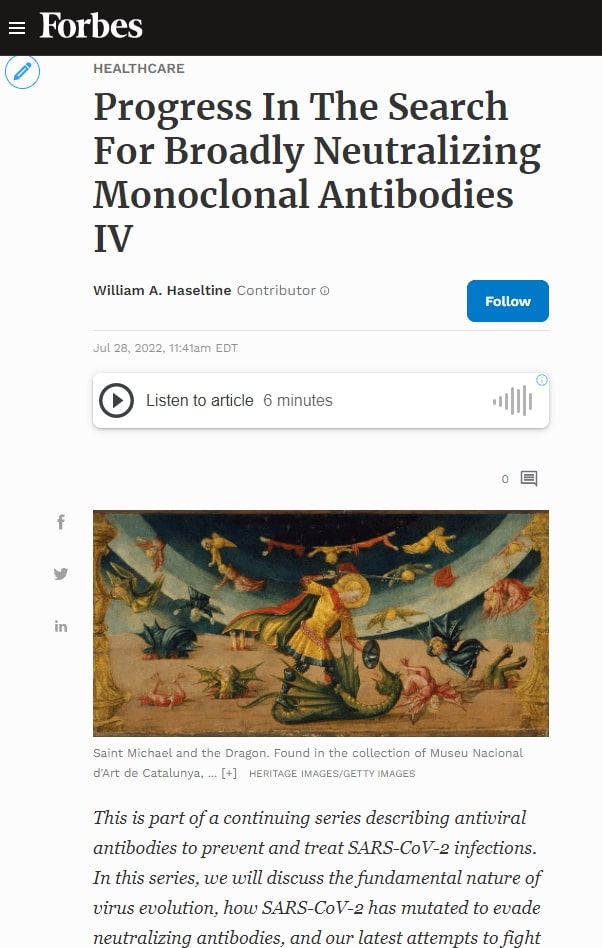 Monoclonal antibody treatments remain our greatest asset in the fight against Covid-19, though in recent months, the effectiveness of these treatments has waned. New variants with more mutations have evolved to overcome antibodies from monoclonal therapies, vaccines, and prior infections. The search for monoclonal antibodies that neutralize not one but all strains is underway to counter these new variants.

In this series, we have discussed several pan-variant monoclonal antibodies, all of which promise against current Omicron strains and previous variants of concern such as Alpha, Beta, and Delta. Here we analyze another described in a study by Zhou et al.: the ZCB11 antibody.

Hong Kong researchers used an uncommon antibody identification method in their study. Antibodies described previously in this series were identified either from the sera of those naturally infected with Covid-19 or from a specially-engineered mouse model. Here researchers use the sera of mRNA vaccine inoculated patients as the basis for antibody collection.

Collecting the sera of 34 Pfizer vaccinated subjects, Zhou et al. found that only two of the 34 samples had neutralizing activities against all variants of concern included in the study, notably Alpha, Beta, Gamma, Delta, and Omicron BA.1. Subject #26 displayed the highest neutralization titers against Beta and Delta. They showed above-average neutralization of Alpha, Gamma, and Omicron. Zhou et al., therefore, took a closer look at the sera of this vaccinee for broadly neutralizing antibodies.

The researchers collected another blood sample 130 days after the second vaccination. Fourteen antibodies were identified, while only seven (ZCB3, ZCB8, ZCB9, ZCB11, ZCC10, ZCD3, ZCD4) showed positive responses to WT spike. They narrowed these seven to four by limiting their search to receptor-binding domain-specific antibodies that displayed neutralization against the wildtype Wuhan strain, namely ZCB3, ZCB11, ZCC10, and ZCD3. Along with a control antibody, ZB8, these four moved onto VOC neutralization assays.

Zhou et al. conducted both pseudovirus and live virus assays for the four antibody candidates. Against the Alpha, Beta, Gamma, Delta, and Omicron BA.1 pseudotypes, ZCB11 was the only candidate to neutralize all variants and consistently outperformed other antibodies when they did neutralize.

Against authentic viruses, this result was replicated to an even greater degree. ZCB11 consistently and effectively neutralized all variants in the lineup, including Omicron BA.1, BA.1.1, and BA.2. We note that the currently circulating BA.4 and BA.5 were not included in the neutralization assays. Still, the potent neutralization of BA.2 and all earlier strains strongly indicates ZCB11’s broad neutralization.

Alongside many other monoclonal antibodies, The ZCB11 antibody targets the receptor-binding motif. Cyro-electron microscopy analysis of the antibody revealed the antibody binding to the Spike protein in the “up” conformation, wherein the Spike is preparing to bind the ACE2 receptor of the host cell.

Why does this antibody neutralize much more effectively than previous monoclonal treatments when they all bind the receptor-binding domain? We can attribute this to two things. One reason for the broad activity found with ZCB11 is that most of the amino acid contacts are highly conserved among all known coronavirus sequences.

Notably, Zhou et al. found that S477N and T478K increase the binding affinity between the antibody and Spike, rather than interfering with neutralizing capability. They postulate that this is at least a partial explanation for the antibody’s substantial neutralization of the variant.

As we recommend with all broadly neutralizing antibodies, there is no reason to limit treatment to just one. An antibody cocktail of two or three monoclonal antibodies covering a broad footprint of conserved residues could be a powerful weapon against current and future strains, which are sure to continue mutating to evade immunity. We must prioritize and expedite these antibodies’ production as the pandemic continues to rage.