Progress In The Search For Broadly Neutralizing Monoclonal Antibodies VIII 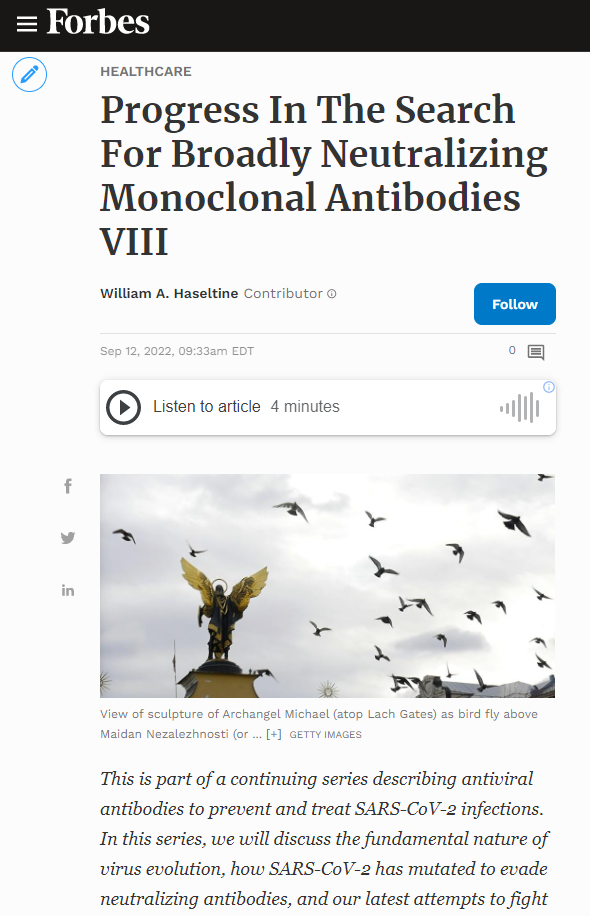 In this series, we have discussed several pan-variant monoclonal antibodies, all of which show promise against current Omicron variants and previous variants of concern, such as Alpha, Beta, and Delta. Here we describe one promising new antibody described in a study by Ishimaru et al. that targets a conserved site in SARS-CoV-2 variants.

Three of the ten stood out in ELISA binding assays: MO1, MO2, and MO3. All three efficiently bound the D614G variant of SARS-CoV-2 and Omicron BA.1 and BA.2. MO1 and MO2 also bound to the Delta variant. Most notably, MO1 effectively bound the pervasive BA.5 variant driving the majority of infections worldwide at the time of writing.

Ishimaru and colleagues next performed neutralization examinations on the three antibody candidates to determine if they killed virus particles to the same efficiency as they bound. MO3 was the worst of the three, failing to neutralize even D614G strongly. In second place was MO2, which eliminated Omicron BA.1 and BA.1.1 with excellent efficiency, and D614G, Delta, and BA.2 to a lesser degree.

The true standout of the group was the MO1 antibody. It strongly neutralized the D614G, Delta, BA.1, BA.1.1, BA.2 variants, and BA.5 easily in the 10-100 ng/mL range. Most of the monoclonal antibodies described in this series strongly neutralize BA.1 and BA.2. However, they drop off significantly against BA.5. Furthermore, Ishimaru and colleagues note that MO1 also binds and neutralizes BA.2.75 with significant efficiency, another feat often lost among other monoclonal antibody candidates.

Unfortunately, the exact binding map of MO1 is unavailable at the time of writing. Cryo-electron microscopy analyses are underway as MO1 is further investigated as a vital anti-Covid monoclonal antibody treatment or prophylactic. The researchers note that the antibody binds the receptor-binding domain and likely the receptor-binding motif, the contact region between the virus and the human host cell.

As the exact amino acids are unavailable, we cannot compare MO1 to other similar monoclonal antibodies described previously. However, given the antibody’s substantial neutralization of BA.5 and BA.2.75, MO1 likely avoids major mutation sites in the latest Omicron variants, such as L452R and F486V.

When the binding map becomes available, it would be worth investigating a combination antibody that includes MO1. While the receptor-binding domain is one of the most highly active regions of the virus in a mutational context, MO1’s neutralization of the latest Omicron variants suggests an evasion of these mutations. Pairing MO1 with one or two others could yield a powerful treatment for Covid-19 as of yet unseen in the ongoing pandemic.