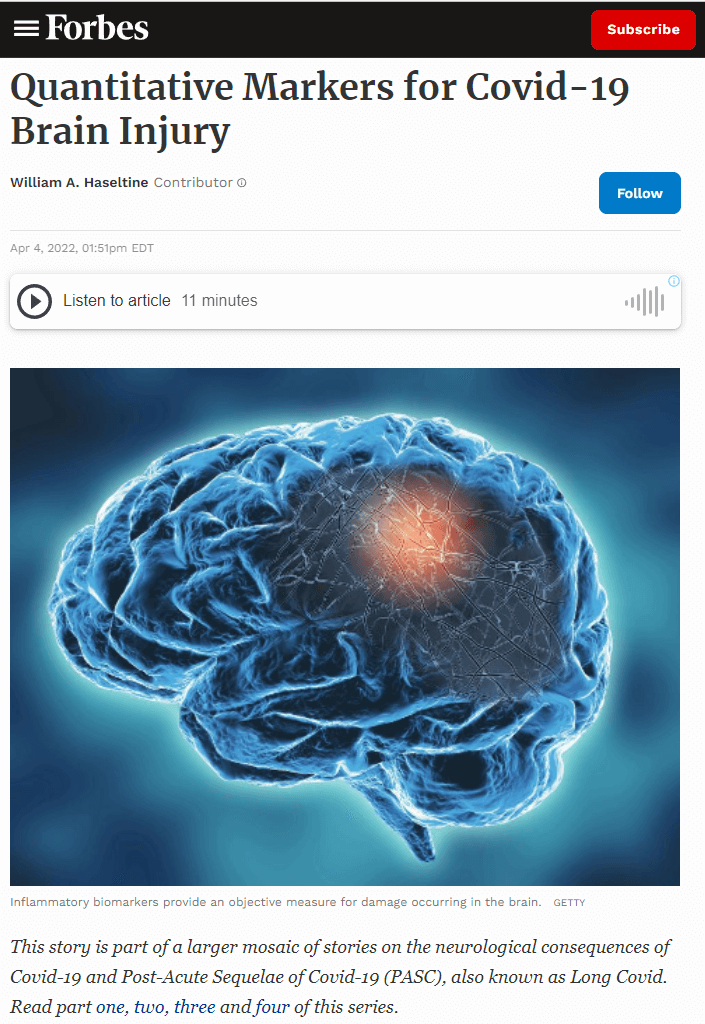 This story is part of a larger mosaic of stories on the neurological consequences of Covid-19 and Post-Acute Sequelae of Covid-19 (PASC), also known as Long Covid. Read part one, two, three and four of this series.

Here, we discuss a series of studies examining the objective measures of blood and cerebrospinal fluid (CSF) that may offer clues as to how Covid-19 injures the brain. Estimates show that half of those hospitalized for neurological complications with Covid-19 continue to experience cognitive impairments. Even more concerning are the increasing reports of long-lasting cognitive symptoms among individuals that experienced mild or asymptomatic infections. It is clear that SARS-CoV-2 can significantly damage brain cells without direct infection. Systematic efforts to detect brain injury have failed to provide explicit evidence of inflammatory damage to brain cells. Previously in this series, for example, we featured brain imaging studies suggesting that Covid-induced structural changes in the brain may uncover or accelerate neurodegeneration. More subtle brain damage also may be occurring that is not as obvious. Researchers are looking to identify quantitative biological markers in blood and cerebrospinal fluid that may reveal more widespread Covid-19-related injury.

Although hypoxia likely accounts for some of the damage seen in the most severely affected individuals, it is unlikely that hypoxia is the primary mechanism for underlying brain injury, The current hypothesis suggests that structural changes in the brain and the long-term cognitive symptoms may be a consequence of hyperinflammation. Measuring inflammation, however, can be difficult. While some symptoms, such as memory loss, fever, and loss of smell, are more obvious, inflammation can also induce psychosomatic symptoms, including fatigue, insomnia and body aches, that are subjectively reported. Identifying neurological biomarkers for inflammation may provide an objective measure for the ongoing neurological symptoms that millions of people have experienced throughout the pandemic.

Unlike blood, cerebrospinal fluid is exclusively found in the central nervous system. Measuring inflammatory biomarkers in CSF can, therefore, provide a direct marker for possible injuries in the brain and spinal cord. For instance, when brain tissues shrink as with old age, increased CSF fills the gaps to maintain the brain’s structural integrity. In the case of an infection, the protein contents of CSF may change as a result of inflammation in the brain and other peripheral tissues.

According to a recent study from Switzerland, pro-inflammatory changes in CSF may be linked to structural changes in the brain generated by Covid-19. One of the major reasons Sanabria-Diaz et al. chose to investigate CSF in the first place is that it provides insight into the integrity of the blood-brain barrier. The CSF/blood-albumin ratio, in particular, is useful for determining the level of albumin in CSF compared to blood. A high CSF/blood-albumin ratio indicates that the permeability of the blood-brain barrier has been altered, often seen in multiple sclerosis and other neurodegenerative conditions.

For their investigation, Sanabria-Diaz et al. selected individuals hospitalized for Covid-19 related neurological complications. Compared to those not exposed to Covid-19, these individuals had significantly high CSF/blood-albumin ratios that positively correlated with widespread reductions in the gray matter of orbitofrontal, frontal and temporal brain regions. This suggests that structural changes caused by Covid-19 may correspond with disruption of the blood-brain barrier, but it is unclear whether one causes the other.

Finally, Sanabria-Diaz et al. measured levels of lactate in CSF through a test often used to differentiate between viral and bacterial meningitis. Not only did individuals exhibit enhanced lactate levels corresponding with viral infection but the presence of lactate in CSF also negatively correlated with brain volume in orbitofrontal, frontal and temporal regions.

Sanabria-Diaz et al. concluded that brain damage may be a consequence of a secondary parainfection complication likely arising from the robust inflammatory response to SARS-CoV-2 that alters the composition of CSF and impairs the blood-brain barrier. Whether these abnormalities may lead to permanent damage remains to be determined.

Elevated levels of inflammatory biomarkers have also been detected in the blood. In a recent study from the NYU Grossman School of Medicine, individuals hospitalized with Covid-19 displayed significantly high levels of inflammatory neurodegenerative biomarkers in their blood. Despite no previous history of dementia or cognitive deficits, these individuals experienced worse outcomes associated with encephalopathy, or injury to the brain.

When the body encounters SARS-CoV-2, a robust immune response launches to release various immune cells, such as cytokines, into the bloodstream. In addition to cytokines that can cross through the blood-brain barrier, the brain may also produce its own inflammatory proteins to protect brain cells from injury. Studies of chronic inflammation in the brain indicate that enhanced production of pro-inflammatory neurodegenerative biomarkers, particularly tau proteins, neurofilament light chain (NFL) and glial fibrillary pacific protein (GFAP), may serve as an indicator that neurons are not only being injured but also glial supportive cells.

First, Frontera et al. asked if blood biomarkers for neuronal and glial injury correlated with the onset of new neurological complications among those hospitalized for Covid-19. Indeed, individuals with neurological symptoms displayed significant levels of NFL, GFAP, tau and several other neurodegenerative biomarkers, compared to pre-pandemic blood samples. Even when race, age, and pre-existing conditions were controlled, individuals with increased levels of NFL, GFAP, and tau, in particular, were less likely to be discharged home.

Next, Frontera et al. found that higher levels of inflammatory biomarkers correlated with increased disease severity and worse outcomes. Especially high elevations were seen in those diagnosed with toxic-metabolic encephalopathy, a form of brain injury that can produce behavioral changes, induce seizures, and alter consciousness. These individuals were also more likely to require mechanical ventilation, suggesting a possible link to hypoxia in the brain.

Interestingly, enhanced levels of NFL, GFAP and tau biomarkers have also been implicated in the development of Alzheimer’s Disease. As Alzheimer’s progresses, amyloid plaques and tau neurofibrillary tangles accumulate in the brain leading to worsening cognitive function. Build up of these proteins induces chronic inflammation in the brain, consequently damaging neurons and supportive glial cells. Animal models of Alzheimer’s disease also seem to suggest that hypoxia, resulting from extensive build of these proteins, can phosphorylate, or activate, tau proteins prompting greater build up in the brain and more inflammation. Therefore, investigators speculate that the combined consequences of hypoxia and hyperinflammation caused by Covid-19 may capitalize on the pathology of Alzheimer’s Disease to produce widespread damage in a short period of time.

To their surprise, Frontera et al. found that some hospitalized individuals had more circulating inflammatory biomarkers than Alzheimer’s patients not exposed to Covid-19. This may be linked to the robust immune response unique to SARS-CoV-2 infection. For example, inflammatory cytokines produced to fight the virus have been shown to injure endothelial cells lining blood vessels, including those that make up the blood-brain barrier. Not only does this disrupt cognitive function but animal studies have also shown that the activation of these cytokines can prompt the development of amyloid plaques and neurofibrillary tau tangles.

The pathology of Covid-19, however, cannot be entirely conflated with Alzheimer’s Disease. Frontera et al. did not find any correlations between SARS-CoV-2 and the development of beta amyloid plaques, a significant hallmark for Alzheimer’s Disease. Also, blood tests alone cannot differentiate between an Alzheimer’s diagnosis or another form of dementia. Since age seems to correlate with Covid-19 symptom severity, it is possible that infection may uncover or accelerate late-onset neurodegeneration in some individuals.

Does this mechanism extend to neurological complications associated with long Covid? A recent study from researchers at Northwestern University Feinberg School of Medicine compared blood samples of individuals currently hospitalized for Covid-induced encephalopathy to those that were not hospitalized during infection, as well as those previously hospitalized for other Covid-19 complications, but now are experiencing new neurological complications associated with long Covid. Among individuals 50 years and older, the encephalopathy group had significantly high levels of NFL and GFAP, consistent with the previous study. However, the other groups did not differ from the controls, suggesting that the Alzheimer-like consequences of Covid-19 may be unique to the development of encephalopathy during acute infection. Additional investigations are needed to determine whether these changes in the brain will progress into full Alzheimer’s Disease or other forms of dementia.

Inflammatory biomarkers provide an objective measure for the damage we know is occurring in the brain. Despite the overwhelming evidence from CSF and blood tests that hyperinflammation underlies much of the neurological damage caused by Covid-19, we still do not know why some develop more severe complications than others. Future studies comparing the biological markers found in both CSF and blood may provide greater insight. It is possible that infection uncovers or accelerates neurodegeneration that is already occurring, especially among older populations. Understanding the mechanisms underlying Covid-19 induced brain injury now will help us to better prepare for a growing class of people living with cognitive disabilities.