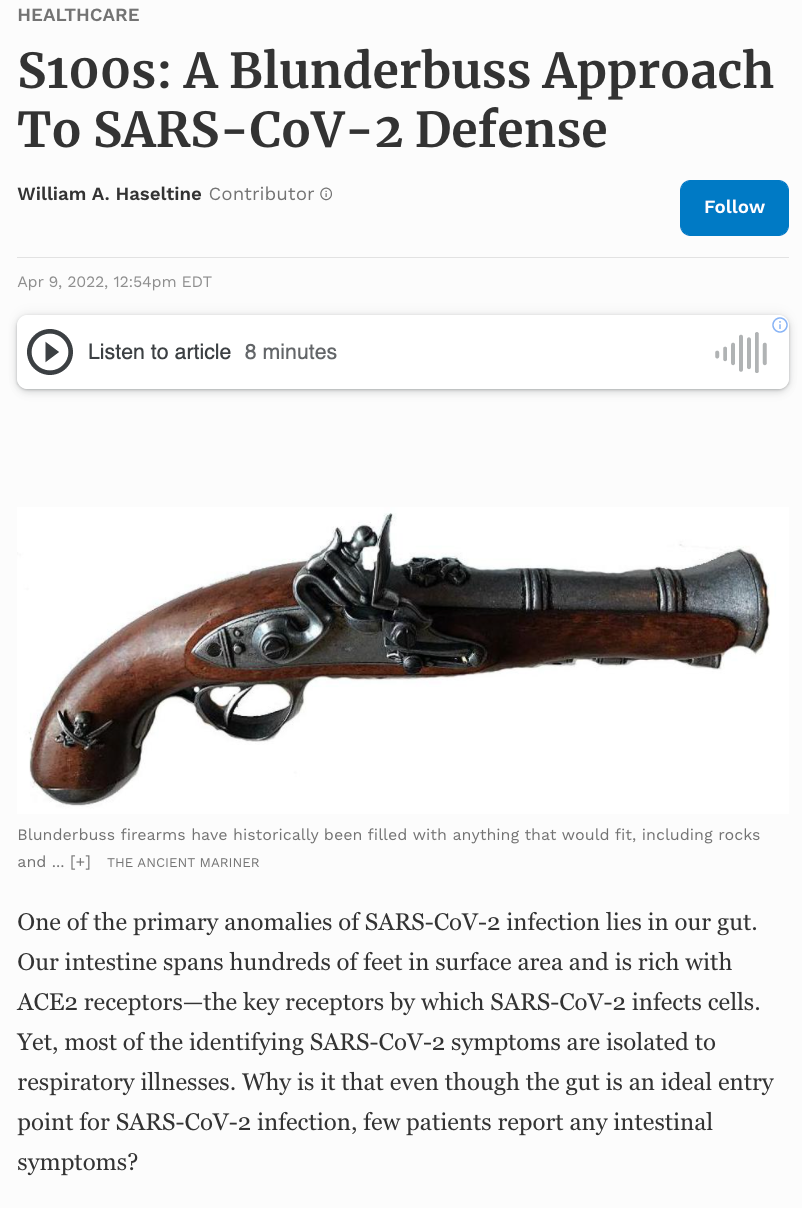 One of the primary anomalies of SARS-CoV-2 infection lies in our gut. Our intestine spans hundreds of feet in surface area and is rich with ACE2 receptors—the key receptors by which SARS-CoV-2 infects cells. Yet, most of the identifying SARS-CoV-2 symptoms are isolated to respiratory illnesses. Why is it that even though the gut is an ideal entry point for SARS-CoV-2 infection, few patients report any intestinal symptoms?

In previous installments of this series, we have discussed several different molecules that appear in the intestine’s natural defense system including type 3 innate lymphoid cells (ILC3s), interleukins, and defensins. Now, we introduce an unsung hero of the gut that offers even greater protection against the effects of infection— S100s located in the intestine.

S100s are proteins characterized by their ability to bind to calcium. There are currently 25 known members of the S100 family, and they are typically found in neural cells such as dendritic cells and chondrocytes but can be found in other cells of the body as well. S100s are categorized into three subgroups: those that perform only intracellular functions, S100s that possess both intracellular and extracellular roles, and S100s that only have extracellular effects. Because the scope of the S100 family is so broad, S100s have been implicated in several key immune functions including apoptosis and inflammation.

One of the key features of S100s is that they are damage-associated molecular pattern molecules (DAMPs). DAMPs are messenger molecules. When a cell is damaged by trauma or a pathogen, it will release DAMPs into the extracellular space. The DAMPs can then interact with other cells to communicate that there may be danger nearby by inducing an inflammatory response.

S100s are particularly effective DAMPs because there are so many different forms of the molecule, each with the ability to bind to 1 or more receptor types (Figure 2). Since cells often have unique receptors on their cell membrane, the versatility of the S100 family allows them to communicate the danger of a nearby infection to several, if not all cells.

Once an S100 binds to a receptor on the cell membrane, this triggers a chain of phosphorylation events within the cell, ultimately leading to the production of AP1 or NFkB. Both AP1 and NFkB are transcription factors that are crucial for triggering several cell defense mechanisms, including inflammation.

How do S100s relate to the gut? While S100s are generally found in neural cells, they are also found in the gut and in the cytoplasm of white blood cells called neutrophils. When viruses invade the gut, they activate interleukin-3 (IL3) molecules. These IL3 molecules then activate interleukin-22 (IL-22). IL-22 stimulates the production of several antimicrobials including defensins and S100s. Once S100s have been produced by IL-22, they are free to trigger or amplify an inflammatory response in the gut against a virus.

Guo et al. focused their project on exploring how S100s contribute to the pathogenesis of SARS-CoV-2. To investigate this relationship, the researchers infected monkeys (rhesus macaques) with SARS-CoV-2 and analyzed the RNA molecules in the monkeys’ lungs and blood after infection.

A Unique Immune Response to Coronavirus

Researchers found that within the first few days of infection, the presence of type-1 interferons, T cells, and B cells did not increase. Instead, they discovered several genes that were related to the activity of anti-bacterial pathways. They also found a significant presence of neutrophil marker genes. These results suggested that in the early stages of SARS-CoV-2 infection, the virus provokes an anti-bacterial response and triggers an uptick in neutrophil activity or inflammation.

To determine how SARS-CoV-2 infection triggers the activation of anti-bacterial pathways, the researchers then examined which genes were expressed after infection and compared them to the genes expressed before infection. Guo et al. found that there was robust expression of S100A8. The expression of S100A8 also increased dramatically in monkeys that had greater amounts of SARS-CoV-2 in their bodies.

These results were consistent with data from SARS-CoV-2 patients. Guo et al. found that when they compared post-mortem lung samples from SARS-CoV-2 patients to healthy lung tissue from uninfected individuals, both S100A8 and neutrophil marker genes were significantly upregulated, confirming that hyper-inflammation had taken place.

When these experiments were repeated with mice infected with influenza A virus, encephalomyocarditis virus, herpes simplex virus-1, or coronavirus MHV-A59, only coronavirus MHV-A59 was linked to an upregulated expression of S100A8 and neutrophils. Guo et al. then examined the structures of the neutrophils in mice infected with SARS-CoV-2 and MHV-A59, and found that surprisingly, infected mice’s neutrophils were distorted. This suggests that coronaviruses induce an abnormal immune response that causes hyper inflammation and distorted neutrophil cells.

Discovering the role of S100s

From this, Guo et al. hypothesized that the distorted neutrophils may contribute to the lethality of coronaviruses, but how were the abnormal neutrophils formed?

Since S100A8 is found in the cytoplasm of neutrophils, Guo et al. designed an experiment to investigate the role of S100A8 in the formation of abnormal neutrophils and how the small proteins might contribute to the lethality of coronavirus.

An interesting aspect of S100A8 is that it binds to S100A9. The two molecules then act together as a single DAMP to activate immune responses in the body. Researchers used a drug called Paquinimod that suppresses S100A9’s ability to cell receptors. By blocking S100A9 activity in infected mice, Guo et al. hypothesized that they could prevent the S100A8/A9 from forming and activating an immune response.

When infected mice were treated with Paquinimod, the drug was highly successful at minimizing severe SARS-CoV-2 and MHV-A59 symptoms. Paquinimod significantly alleviated damage to the lungs, decreased the activity of neutrophils, and decreased the level of coronavirus in the mice. Most neutrophils in the Paquinimod-treated mice also returned to their normal structures. In other words, by suppressing S100 activity, researchers successfully rescued mice from fatal coronavirus infection.

While Guo et al.’s research suggests that S100s in neutrophils might be more harmful than they are helpful, the discovery of S100A8/S100A9’s role in inflammation suggests that we might need to be paying closer attention to how S100s react to SARS-CoV-2 across the body. So far, we’ve seen that their inflammatory properties help the gut evade the effects of SARS-CoV-2, but their potential to induce hyper inflammation may cause severe symptoms in the lungs. Now that we’re seeing that SARS-CoV-2 causes inflammation-induced brain damage, it will be interesting to discover whether S100s are to blame.

Overall, Guo et al.’s research provides significant insight into the intricacies of SARS-CoV-2 and offers a new avenue of research for the development of anti-SARS-CoV-2 medications.