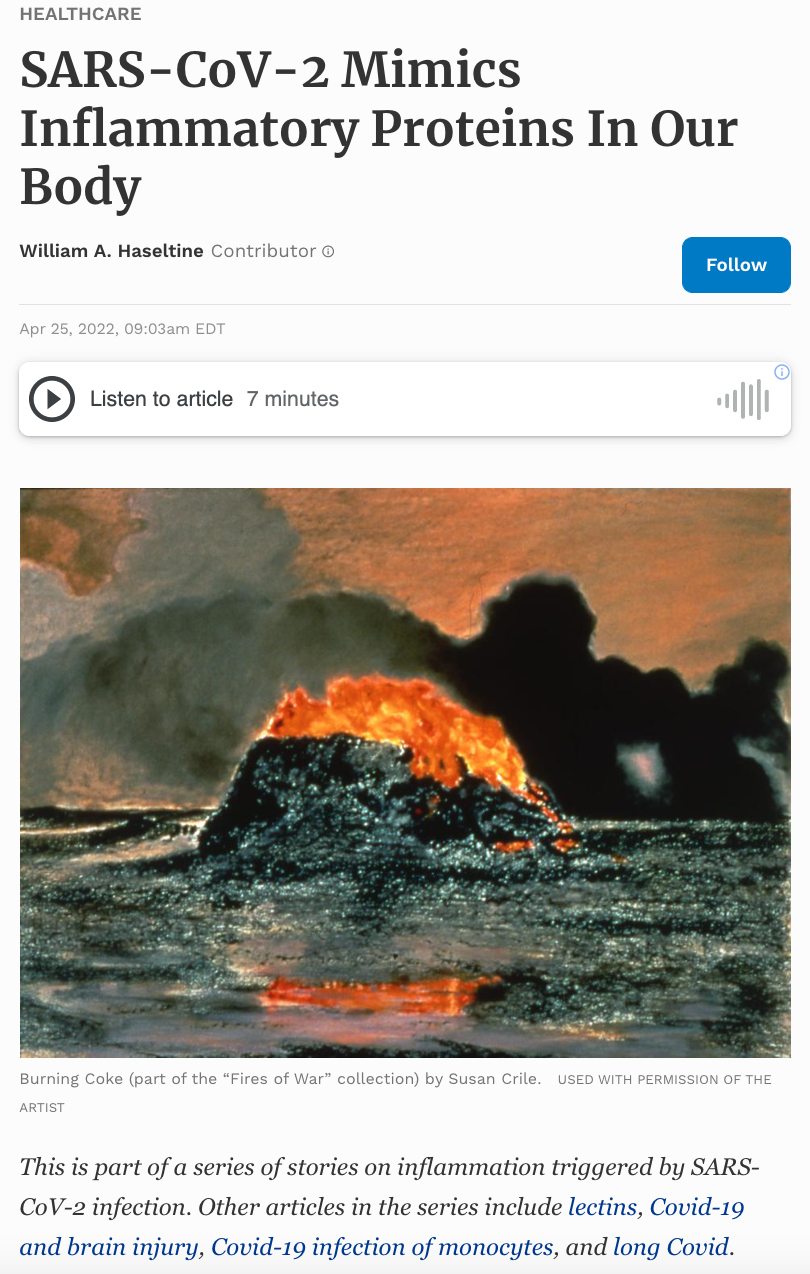 This is part of a series of stories on inflammation triggered by SARS-CoV-2 infection. Other articles in the series include lectins, Covid-19 and brain injury, Covid-19 infection of monocytes, and long Covid. They may also be found on my website, www.williamhaseltine.com/.

One of the paradoxes of SARS-CoV-2 is that while it represses interferons in the innate immune system, it ignores and may even exacerbate our innate immune system’s most violent form of defense: the inflammatory response. Inflammation is one of the most serious consequences of viral infection and is a hallmark of severe SARS-CoV-2. When SARS-CoV-2 replication and inflammation are left unchecked, they not only lead to severe immediate consequences but long-term consequences.

Interleukin-17 is a family of proteins that are produced by T-helper immune cells. They are one of the principal molecules tasked with triggering the inflammatory response in the body. When interleukin-17 proteins interact with their corresponding interleukin-17 receptors on the cell membrane, a cascade of reactions is induced within the cell. This cascade of reactions leads to the activation of the transcription factor NFkB. NFkB induces several cell defenses, including inflammation.

Clinical data has shown that patients with severe SARS-CoV-2 display high levels of inflammation, leading to acute respiratory distress syndrome and multiple organ failure. While antibodies that target interleukin-6 are commonly used to inhibit inflammation, they did not seem to have the same effect in SARS-CoV-2 patients.

The question that remained was how does SARS-CoV-2 cause inflammation and what treatments could be used to diminish inflammation?

In a second, related story, scientists from the Lerner Research Institute found similar results. When analyzing the interactions between ORF8 and interleukin-17 receptors, Wu et al., found that inflammation was a direct result of these interactions.

A puzzling aspect of the ORF8/interleukin-17 receptor interaction, however, is that ORF8 and interleukin-17 are not very structurally similar. So, how effective could ORF8 be at actually mimicking the effects of interleukin-17?

Wu et al. isolated blood cells containing interleukin-17 receptors and treated each sample with either ORF8 or interleukin-17 proteins. After these treatments, researchers analyzed the RNA of each blood cell sample to determine how gene expression differed between the samples. These results would indicate how well ORF8 could mimic the effects of interleukin-17 inside the cell.

Interestingly, they found that among the upregulated genes, 81.7% of genes were shared between the two sample groups. Among the downregulated genes, 64% of genes were similar between the two groups. These results confirmed that while ORF8 mimics interleukin-17 to a high degree by initiating similar inflammatory pathways, there are still some distinctions between the pathways they activate through the interleukin-17 receptors.

Both of these studies represent real progress in understanding the inflammation that occurs in patients with severe SARS-CoV-2 and reveals potential treatments against inflammation that could significantly reduce the danger of SARS-CoV-2 infection. It is still a mystery as to why coronaviruses developed a protein that could induce an inflammatory reaction. However, these papers reveal that protein mimics of interleukin-17 and their ability to bind to interleukin-17 receptors may be the key to why some variants of SARS-CoV-2 are more deadly than others.