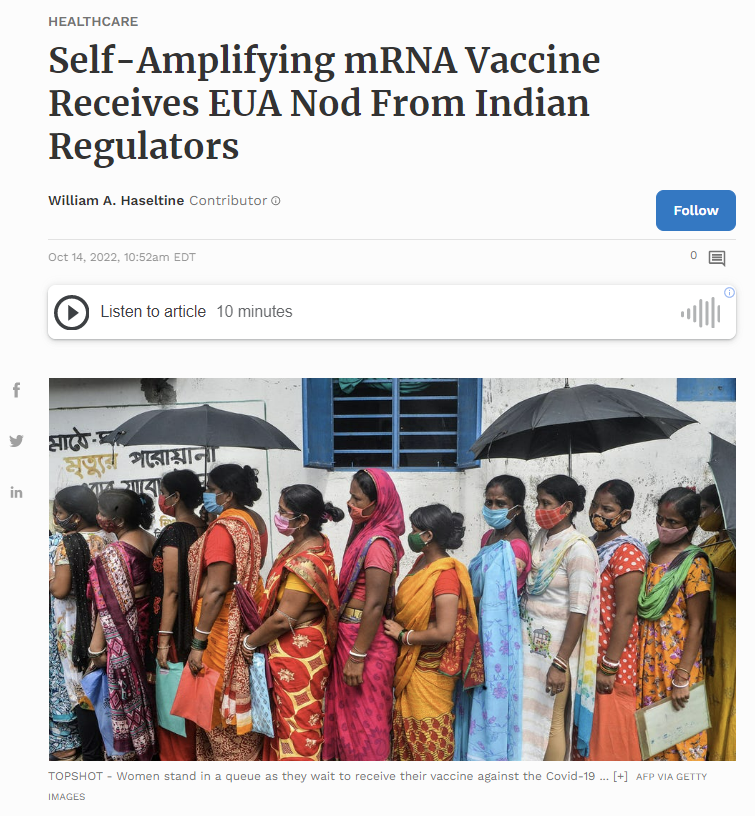 This is the third article in a series on next-generation mRNA vaccines. The first two installments can be read here and here, respectively.

Messenger RNA (mRNA) technology has been central to the global response to Covid-19, enabling rapid manufacture of effective vaccines. But the virus continues to evolve, learning to out-maneuver prior immunity, whether from infection or from vaccination. To keep up, researchers and manufacturers alike have been developing the next generation of mRNA vaccines. Here, we take a look at one such example: India’s first home-grown mRNA vaccine, Gemcovac-19, manufactured by Gennova Biopharmaceuticals. The Office of the Drugs Controller General of India (DCGI) has granted the vaccine emergency use authorization (EUA), and an Omicron-specific booster shot is already in the works.

The first next-generation feature of Gennova’s vaccine comes in the form of self-amplifying RNA technology. Where traditional Covid-19 mRNA vaccines are based only on the genetic sequence that encodes the spike protein of SARS-CoV-2, Gemcovac-19 includes a sequence of alphavirus RNA that encodes four non-structural proteins. Once inside a host cell, these non-structural proteins come together to form a molecule called an RNA replicase — a transportable “photocopier” that prints out multiple copies of the mRNA sequence (Figure 1). This means each mRNA sequence included in the vaccine is able to make copies of itself, increasing the amount of antigen produced. It also extends the duration of mRNA translation over a longer period of time; usually the vaccine-derived mRNA is degraded after a day or two, limiting protein expression to two to three days at the most. However, self-amplifying RNA technology can extend this timeframe —both mRNA and protein production— to up to almost a month.

Self-amplifying RNA technology comes with a number of benefits. For one, because each mRNA sequence will produce multiple copies of itself, manufacturers can use a much smaller amount per vaccine dose. The smaller dose enables multiple different strands of mRNA —each encoding its own antigen— to be included in one vaccine. The dose-sparing approach also significantly reduces the cost of production; the price of the vaccine drops accordingly, making it more accessible to low- and middle-income nations that may not be able to afford the conventional Pfizer/BioNTech or Moderna counterparts.

The second major advantage is on the immunogenicity front: since self-amplifying mRNA allows more of the target antigen to be produced, over a longer period of time, it gives our immune system a better chance to learn what it needs to develop a highly targeted immune response. Longer exposure to an antigen allows the antibody response to mature, to make higher-affinity, more-potently neutralizing antibodies, as well as antibodies that may elicit cellular cytotoxicity. Moreover, longer antigen exposure is important for generating memory T cells required for long-lasting memory. Finally, the inclusion of alphavirus RNA, which mimics viral replication, may act as a natural adjuvant by stimulating pattern recognition receptors.

A drawback of first generation mRNA vaccines is that they need to be stored at extremely low temperatures. Pfizer/BioNTech’s Covid-19 vaccine, for example, has to be kept at minus 103 degrees Fahrenheit (around minus 75 degrees celsius); in a conventional refrigerator, the vaccine degrades within five days, and at room temperature, this drops down to a mere six hours. This poses logistical challenges when it comes to transportation and storage of the vaccine, especially in areas where the necessary “ultra cold-chain” infrastructure —the network of refrigerators, freezers, cold boxes, and cold rooms used to keep the vaccines at the right temperature— is lacking.

Gennova’s vaccine mitigates this issue through lyophilization, or freeze-drying. This is a process by which solvent is gradually removed from the vaccine solution (Figure 2). Once the solution has been frozen, which is the first part of the process, it is then put in a low-pressure chamber to get it to “jump” from a solid state directly into a gaseous state. This jump removes roughly 95% of the solvent, leaving behind a chalky powder. The remaining liquid is removed in a second drying cycle.

The vaccine powder that remains after freeze-drying is significantly more temperature stable than the liquid solution. Compared to the sub-zero temperatures required for first-generation mRNA vaccines, the Gemcovac-19 vaccine can be stored between 35 and 46 degrees Fahrenheit (two and eight degrees Celsius) without any issue. Instead of special freezers, it can just be kept in a normal refrigerator. Even without any refrigeration, the lyophilized vaccine can maintain its efficacy for an extended period. This provides countries that may not have the infrastructure in place to accommodate the ultra cold storage requirements of conventional mRNA vaccines with a more stable, equally effective counterpart. Lyophilization also reduces weight and volume, cutting down on shipping costs and again making it more accessible to low- and middle-income countries.

One additional feature that sets Gennova’s vaccine apart from the older, first-generation Covid-19 mRNA vaccines is the fact that it is administered intradermally (Figure 3).

Our skin is made up of three layers: the outermost protective layer called the epidermis, a middle layer called the dermis, and a fatty layer at the bottom called the hypodermis or subcutaneous tissue. Most Covid-19 vaccines are injected into muscle tissue, which lies well beneath the skin. This has been the standard approach for a long time. But intradermal delivery holds a few distinct advantages.

The dermis layer of skin is tightly packed with immune cells, including antigen-presenting cells (APCs). These play a vital role in the initiation and modulation of our immune system, including our adaptive immune response. In particular, various different types of dendritic cell latch onto antigens and present these to naive T cells, helping to shape and mature a targeted cellular immune response. Since intradermal injection lets the antigen be produced in close proximity to these antigen presenting cells, it may lead to a quicker and more fine-tuned adaptive immune response. A recent study comparing intradermal and intramuscular administration of the SARS-CoV-2 receptor binding domain (RBD) confirmed as much, describing improved T cell responses after injection into the dermis.

Intradermal injection also promises to cut down on costs and boost production, since a smaller dose triggers the same immunogenicity as a larger dose administered via traditional, intramuscular injection.

Finally, intradermal administration comes with the added benefit of needle-free delivery options, such as jet injectors (Figure 4). These use springs or compressed gas to produce a narrow, high-pressure stream of fluid that penetrates the skin and delivers the vaccine. The lack of a needle helps improve uptake, especially among younger and needle-averse populations. The World Health Organization (WHO) has sponsored the introduction of needle-free delivery systems for use with inactivated polio vaccines in Somalia and Pakistan. The needle-free vaccination campaign in Pakistan saw uptake increase by 18.4% compared to the previous year. Both caregivers and vaccinators overwhelmingly preferred needle-free delivery compared to needle and syringe, with 100% of surveyed caregivers admitting they would be more likely to bring their children back for a future vaccination campaign that used needle-free injectors.

Needle-free delivery also nullifies the possibility of needle reuse and subsequent cross contamination, which continues to be a commonplace issue in many parts of the globe, with up to 1.3 million deaths a year attributed to such practices. Needle-free delivery also precludes accidental needlestick injuries, which again can lead to cross contamination and infection. Needlestick injuries are also prevented during the sharps disposal process, which is often a complex and expensive process that is difficult to properly adhere to in many cases.

Gennova Biopharmaceuticals’ new Covid-19 vaccine, Gemcovac-19, represents a step towards next-generation mRNA vaccines. The use of self-amplifying RNA technology allows for cost-effective vaccine dosing and gives our immune system more time to develop high-affinity antibodies and mature T cells. The fact it is freeze-dried makes it easy to transport and store, including in areas that may not have easy access to cold-chain infrastructure. And needle-free intradermal delivery enables quick and painless administration, which may help to improve uptake while also improving cellular immunity.