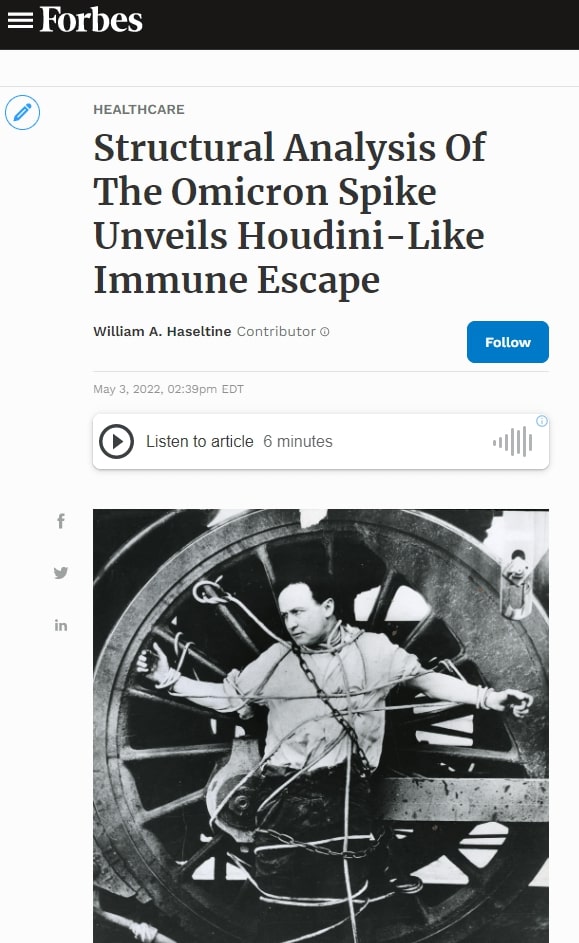 Omicron is the ultimate escape variant. Not only does it escape from natural and vaccine-acquired immunity, but it also escapes most, but not all neutralization from monoclonal antibodies. A recent paper by Wang et al. not only describes a new broadly neutralizing antibody but also provides a deep understanding of the structural properties of the Omicron Spike protein uses to facilitate immune evasion while remaining sensitive to neutralization by some monoclonal antibody treatments. Here we describe some of Wang et al.’s most striking observations.

As has been well established, the Omicron BA.1 Spike and all Omicron family variants that followed have the most mutated Spike protein of any natural variant to this point in the pandemic. In the Omicron BA.1 receptor-binding domain alone, there are 15 mutated sites.

Monoclonal antibodies are described by where they bind, divided into four groups: classes 1, 2, 3, and 4. The mutations in the Omicron receptor-binding domain are located in such a way that they interfere with the binding of all four classes of antibodies. In their investigation of the 35B5 antibody, Wang et al. note that “most of the 15 mutation sites, including N501Y, G496S, K417N, Q493R, and G446S…severely change the epitopic residues of class 1 and 2 mAbs. The G339D and N440K mutations are located in the epitopes for class 3 mAbs…whereas S371L, S373P, and S375F are located at the RBD interface with class 4 mAbs.”

In addition to amino acids changing the structural binding dynamics of the Spike, the mutations also induce electrostatic changes to the spike surface. Altering the charge or polarity of a binding site further inhibits the ability of an antibody to bind, acting as a shield of sorts. In particular, Wang et al. note increased positive charges for regions impacting class 1 and 2 antibodies, as well as increased hydrophobic characteristics at the class 4 interface.

The Omicron S2 subregion contains six further mutations. The mutations of N764K and N856K create further hydrogen bonding and strengthen the interaction between the different domains of the Spike. Other mutations, like D796Y and L981F, increase hydrophobic interactions in the S2 structures, yielding tighter packing and interaction of the Spike trimer, which we will explore in a later article.

However, there are hidden workarounds for monoclonal antibodies that do not involve mutated Omicron residues. These are conserved amino acids that are crucial for basic SARS-CoV-2 functions.

The 35B5 antibody that Wang et al. investigated specifically avoids mutated residues in the receptor-binding domain and attacks conserved regions. This makes 35B5 and conserved-residue-targeting antibodies like it a major threat to Omicron replication and furthermore, any variant of SARS-CoV-2 with these conserved sequences.

The SARS-CoV-2 Spike protein is comprised of a number of sheets and loops, which are structures made of connected amino acids. The stability of one such sheet, beta 5/6, is directly linked with ACE2 binding efficiency. In their investigation of 35B5, Wang et al. found that residues R346, S349, and Y351 are located in the L2 loop, which interacts directly with amino acids in beta 5/6 and stabilizes the conformation of that sheet. An additional residue in the L2 loop, V350, inserts a hydrophobic pocket under beta 5, providing further support for the sheet. The researchers conclude that the conserved amino acids in L2 are crucial for beta 5/6 and ACE2 binding in general.

Though despite competing mutations in terms of ACE2 binding efficiency, the Omicron BA.1 variant still binds 2.4-fold tighter as compared to the wild-type. In addition to the mutations that increase binding affinity, it is possible that the L2 residues from positions 344 to 354 are conserved to compensate for decreased affinity mutations. The required conservation of these residues is therefore a glaring target for the 35B5 antibody or similar antibodies that target the same region.

This is one of many structural intricacies in Omicron and SARS-CoV-2 in general. This analysis will be followed by further discussion of how Omicron differentiates itself from all previous variants of concern and interest, informing monoclonal antibody treatment moving forward.