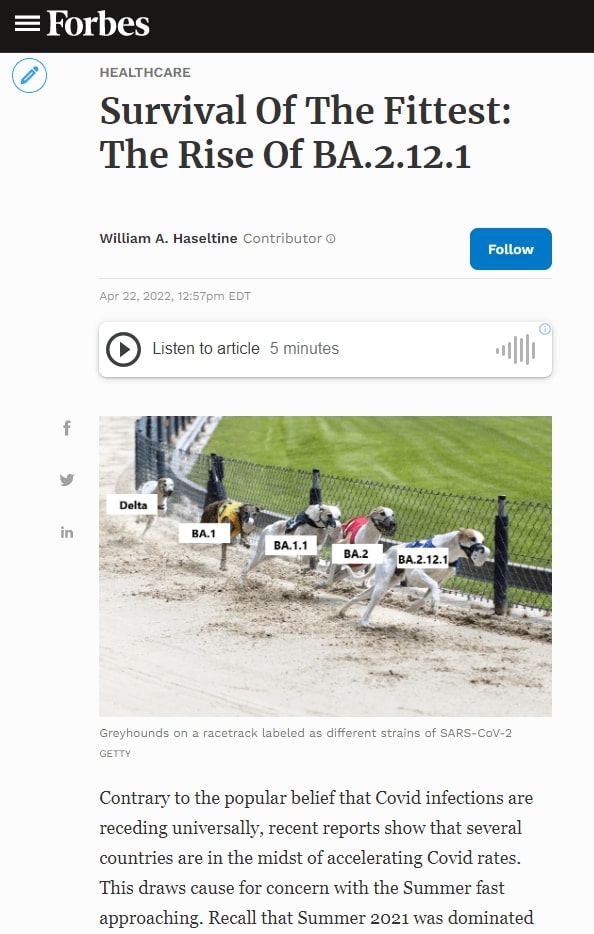 Contrary to the popular belief that Covid infections are receding universally, recent reports show that several countries are in the midst of accelerating Covid rates. This draws cause for concern with the Summer fast approaching. Recall that Summer 2021 was dominated by Delta variant infections. This Summer may be in for something similar. The current increase is almost certainly due to new members of the Omicron family of viruses.

Current estimates suggest that BA.2 variants have replication rates at least 30% greater than BA.1 variants. Two variants, BA.4 and BA.5 in Europe, were recently identified as strains to monitor by the World Health Organization. Figure one illustrates how rapidly descendants of Omicron have diversified and established themselves not only in the United States, but around the world.

One such subvariant is already causing significant case numbers in the American Northeast. In the GISAID SARS-CoV-2 database, BA.2.12.1 is attributed to roughly 2,000 sequenced infections, which suggests that the actual number of BA.2.12.1 cases is at least in the tens of thousands. A recent analysis by the CDC suggests that BA.2.12.1 comprises at least 19% of new cases while BA.2 lineages overall comprise over 90%.

As its lineage name suggests, BA.2.12.1 is a descendant of the BA.2 virus. BA.2 was the main driver of the winter wave of Omicron infections that peaked in the United States on January 14th, 2022, when the daily average was over 800,000 new infections. Part of BA.2’s viral fitness was its remarkably high transmissibility, and another was its expert evasion of the immune system, including antibodies developed from previous infections and vaccinations.

The BA.2 virus’s viral fitness is attributed to its wealth of mutations within and external to the Spike protein. The BA.2 genome contains 53 amino acid mutations, 29 of which are in the Spike protein, far outnumbering the Spike mutations of previous variants of concern and interest.

One mutation lies in the receptor-binding domain. This is a substitution of lysine for glutamine at position 452 (L452Q). This mutation is notable for two reasons. First, L452Q has been previously identified in several variants of concern, like Lambda, Delta, Delta plus, and Epsilon. Second, unlike many mutations where we must only speculate on their impact on viral fitness, L452Q was studied and found to increase escape immunity, allowing the virus to attach more strongly to human cells and avoid neutralizing antibodies.

The second mutation is more mysterious. It is a substitution from serine to leucine at position 704 (S704L). Unlike L452Q, S704L is a relatively rare mutation by way of major variants, and its exact impact on the virus is unstudied. Based on its position in the S2 region of the Spike protein, we can speculate that the mutation may affect either viral fusion or furin cleavage efficiency, but further study would be welcome.

We can say with near certainty that BA.2.12.1 is at least as transmissible and immune evasive as BA.2. It is unlikely that the two Spike mutations would decrease either of these facets of the virus strain. However, due to the wealth of BA.2 cases in previous months, the BA.2.12.1 virus may be impeded by antibodies developed from infections during that wave, which could explain why cases are low relative to the Omicron wave.

However, it is critical to remain vigilant in our surveillance of these subvariants. Recent reports from Hong Kong note that Omicron BA.2 subvariants deliver a similar fatality risk to those infected relative to earlier strains of SARS-CoV-2. This is contrary to many assumptions that Omicron is less severe than previous strains. Additionally, there are indications that Omicron is as dangerous in terms of long-term complications in children as the Delta variant of last summer.

We also note the growing danger of long Covid. As many as 30-50% of Omicron recoverees describe at least some lingering issue post-infection. This is independent of vaccination status and severity of their given infection—the rate increases for those hospitalized.

A new wave of Omicron with BA.2.12.1 or another variant yet to be identified could be as catastrophic as the wave from December to February. At the time of writing, 988,610 people died due to Covid-related complications. We should make every effort to keep that number from continuing to increase. One such avenue is to continue surveilling new variants to inform public health measures and aid the development of Covid-19 treatments.