The Role Of Nucleases In Innate Immune Escape (Part 15) 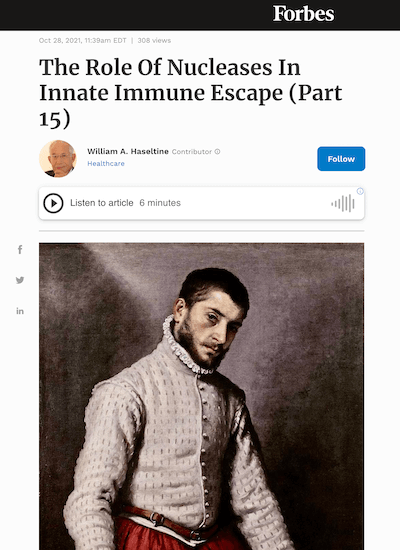 In previous installments of this series we’ve unpacked how SARS-CoV-2 is sensitive to the innate immune response, a complex assemblage of immune sensors and responders that, for high-risk Covid-19 patients especially, can mean the difference between life and death. Over a long period of time the coronavirus family has developed biochemical mechanisms that allow it to counter our innate immune defenses. Some are novel and without precedent, while others have survived generations of selective pressure due to the essential role they play in viral replication.

Among the oldest in the SARS-CoV-2 genome are two viral proteins associated with the replication complex common to all coronaviruses. One is an exonuclease, nonstructural protein 14 (NSP14). The other is an endonuclease, nonstructural protein 15 (NSP15). Both are involved in critical aspects of viral replication, but also in suppression of the innate immune response. Combined, they neutralize some of the primary triggers for production of interferon and interferon-stimulated genes.

Although SARS-CoV-2, like all other coronaviruses, is a positive-sense, single-stranded RNA virus, double-stranded RNA replicates are formed during the viral replication process that typically set off the innate immune response. Upon infection, receptors like RIG-I and MDA5, which induce the production of interferon and the activation of protein coding gene OAS1, detect foreign double-stranded RNA and activate their respective innate immune pathways. Unless something interferes, that is.

Corroborating this theory are studies of other coronaviruses and arenaviruses that encode exonucleases which show that viruses lacking exonuclease activity are more susceptible to interferon. In the absence of the NSP14 exonuclease, conditions become inauspicious for viral infection and replication, a finding that suggests the exonuclease plays a significant role in antagonizing the innate immune response.

The endonuclease NSP15 also participates in innate immune suppression, though by other means. Positive-strand RNA has a cap at one end and a poly(A) tail at the other. The negative-sense viral RNA formed during genomic synthesis, on the other hand, has a tract of polyuridines at the 5 prime end (Figure 1). These polyuridine extensions, like double-stranded RNA replicates, serve as a potential signal for innate immune receptors. But the 5 prime uridine residues also happen to be where the SARS-CoV-2 endonuclease cleaves, further restricting the sensing capabilities of MDA5 and OAS1.

One study shows that infected cells deficient in the endonuclease NSP15 displayed less viral shedding and replication. The flipside of this, according to another study, is a greater concentration of 5 prime polyuridines and increased sensitivity to the antiviral effects of interferon. The authors of the study hypothesize that when the endonuclease cleaves away these polyuridines, it prevents them from folding up into stem-loop structures that might otherwise stimulate innate immune receptors into action (Figure 2).

The last series of observations suggesting SARS-CoV-2 nucleases participate in innate immune suppression focuses on the virus’ low U content. One observation is that the SARS-CoV-2 genome has a composition of four nucleotides significantly different from that of other viruses. The low prevalence of uracil sequences is connotated by an enrichment for guanine and cytosine sequences. According to the authors of this study, the evidence suggests this “increases the observed relative frequency of CpG and most other dinucleotides as frequencies must sum to one.” It also may reflect another mechanism of escape from innate immunity, as many of these cellular nucleases activated by interferon, such as RNAse L, cleave preferentially at uracil residues.

To recap, one of the most critical differences between people who don’t suffer severe consequences from Covid-19 infection and those who do is the performance of the innate immune system. If interferon-induced immune defenses are compromised, so is the likelihood of a mild disease progression and smooth recovery. That a small fraction of Covid-19 patients become seriously ill or succumb to disease is in large measure due to the inability of the innate immune system to ward off the virus within the first five to 10 days of infection. The nucleases NSP14 and NSP15 seem to form one of the earliest and most troubling defenses the virus has evolved to defang the cell’s immune defense.