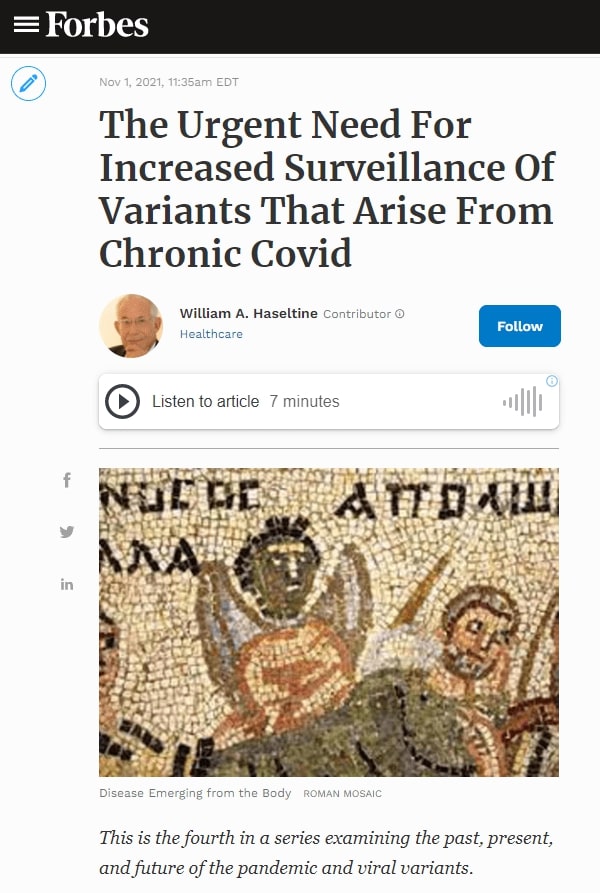 This is the fourth in a series examining the past, present, and future of the pandemic and viral variants.

In our discussion of SARS-CoV-2 mutant strains, it is important to reflect on how viral variation occurs to inform our surveillance of variant emergence. Where do these mutations come from that yield new variants? Is it possible that the most serious variants arise not in large populations, but in immunosuppressed individuals?

There is some evidence, which we will discuss here, that this is, in fact, the case. The virus is capable of surviving for months and upwards of a year or more within immunosuppressed hosts. During this time, SARS-CoV-2 has an opportunity to adapt to immune pressure, both natural pressures from our innate immune responses and treatments like monoclonal antibodies and convalescent sera. These adaptions take the form of genomic mutations. Viruses that emerge from these environments have the potential to be positively selected to become dominant strains.

Viruses exist in swarms of billions of particles, each with a nucleic acid sequence slightly different from the others. Those that replicate most efficiently within a host and those that transmit most efficiently between hosts are selected over time, becoming the dominant version of the genome in the swarm, just as fauna develop advantageous traits via evolution. Via this process, there are winners and losers. This is clearly depicted by the progression from the Triad variant to Alpha and Gamma to Delta.

There may be several traits that SARS-CoV-2 selects for, transmissibility being the foremost. Others include replication efficiency, evasion from neutralizing antibodies, and viral pathogenesis.

The next question is whether the rise of major mutations like those in the Triad or the defining Spike mutations in Alpha or Delta arise at random or from patterned sources. While all mutations emerge from passaging the virus through a host, some hosts are different from others. There are two such examples of extraneous viral passaging in human hosts: Covid-19 in immunosuppressed patients and instances of long Covid.

As early as December 2020, the scientific community was aware of the threat that Covid-19 cases in immunosuppressed patients represented. One such case was described in the New England Journal of Medicine. A 45-year-old man in Boston with severe antiphospholipid syndrome dealt with ongoing Covid-19 illness for 154 days before succumbing to Covid-related symptoms. The man was given multiple sets of antibody treatments, including Remdesivir and Regeneron.

After his death, researchers analyzed sera from the patient at different stages of his infection. They found that the virus that had initially infected him was not the same virus that was extracted near his death. Over the course of infection, the virus had selected dozens of mutations at different points of infection. In other words, genomic mutations were selected as normal, but it was as if there were multiple passages of the virus rather than one.

SARS-CoV-2 has a wide variety of mechanisms in its various proteins to surpass innate immune defenses, such as interferon antagonism, RNA camouflage, etc. Immunosuppressed hosts are more easily invaded and the virus is more capable of efficiently replicating upon infection. This allows immune evasive and transmissibility mutations to be effectively selected. For instance, the Boston patient showed instances of the Spike E484K mutation months before that mutation was selected in the Beta variant in South Africa and the Gamma variant in Brazil.

Not all long Covid cases are within immunosuppressed hosts, but similar principles apply. The virus remains within the host, replicating, and selecting advantageous mutations.

At least five studies similar to the Boston patient were conducted, all of which were treated by convalescent sera or monoclonal antibodies and all of which resulted in distinctly mutant viruses than the strain that infected the patient in the first place. One patient in Pittsburgh yielded numerous N-terminal domain mutations, which later became commonplace in many variants of concern or interest. Another in Italy yielded a mutation in the Spike protein, Q493K, that was notably also noted independently in the Boston patient. Though the question remains, if immunosuppressed Covid-19 patients and long Covid cases are the perfect environment for mutations and new, dangerous variants to flourish, why are we not more engaged in viral surveillance of these cases?

There are some governmental bodies attempting surveillance. For instance, the Massachusetts Department of Public Health uses a network of local boards of health, state epidemiologists, state public health labs, clinical labs, and so on to monitor incoming reports of SARS-CoV-2 infection. This data is collected and analyzed for real-time information sharing with local health officials. Aggregated public health data systems like this could survey for long Covid instances.

However, these health systems are few and far between. Funding for SARS-CoV-2 monitoring is limited and many states and municipalities believe the pandemic is over, much less that sequence monitoring is worthwhile.

This is a call for more such research on immunosuppressed cases of long Covid. Contingent on patient consent and participation, there are plenty of cases that could be studied which may be illuminating in the ongoing and future state of variants in the pandemic. This data is simply not being examined. These studies could be vital to understand how the Delta variant, specifically, reacts to monoclonal antibody treatment in long Covid cases.

This series highlights the dangers that SARS-CoV-2 variation represents. The Delta variant is magnitudes more infectious than the original virus that emerged from Wuhan. Early indications suggest that new Delta Plus sublineages are at least 10% more infectious than Delta.

Regardless of whether some believe the pandemic is over, SARS-CoV-2 will continue to infect vulnerable populations, mutate to become more transmissible, and so on. The reality is that this virus will become a consistent aspect of regular human existence. The question is whether we leave it unchecked or if we monitor, surveil, and minimize the virus and its impact. There are thousands of hospitals around the world filled with many patients suffering from long Covid. These patients should be monitored in more detail so that we can be prepared for whatever comes next. We urge governmental authorities to address SARS-CoV-2 surveillance with the gravity it deserves.