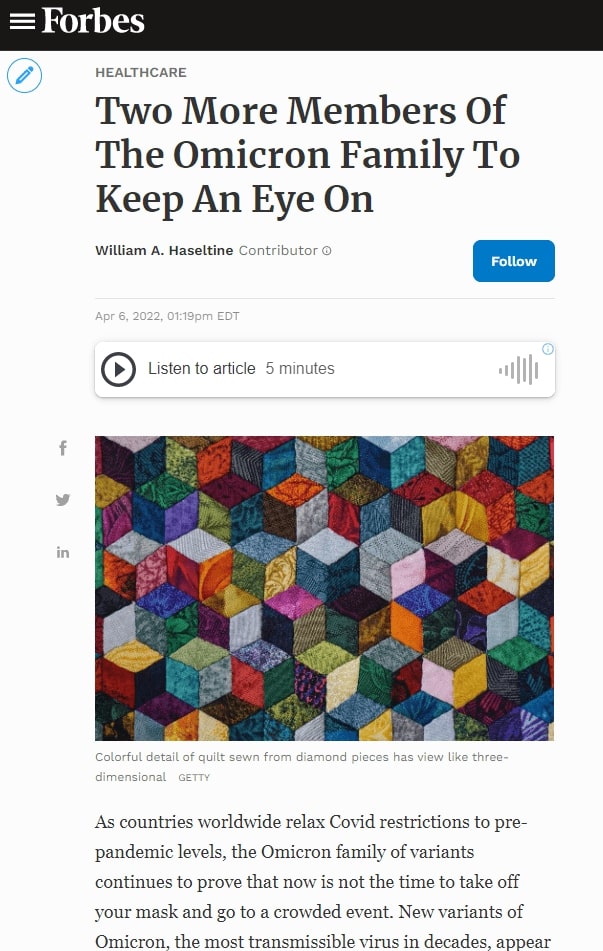 As countries worldwide relax Covid restrictions to pre-pandemic levels, the Omicron family of variants continues to prove that now is not the time to take off your mask and go to a crowded event. New variants of Omicron, the most transmissible virus in decades, appear week after week, each with a unique addition that may make the virus that much more infectious. Here we examine some of these emerging substrains and how they could impact viral characteristics like transmission, immune evasion, and virulence.

In a previous publication for Forbes, we discussed Omicron and its ability to recombine with other viruses. To recount, recombination is the exchange of one portion of a virus’s viral genome for another during the replication process. This is possible when a host is coinfected with two different viruses; the replicating polymerase of one virus replicates a portion of the other virus by mistake, incorporating it into its genome.

Here we focus on Omicron XE, a recombinant of the BA.1 and BA.2 substrains of Omicron.

As the figure above illustrates, XE recombines in the Orf1a region of the virus. Orf1ab is the replication machinery of SARS-CoV-2, meaning proteins in Orf1ab affect replication efficiency and virus load in a host. Omicron XE recombines at nucleotide position 11,537. This lies in nonstructural protein (NSP) 6. All nucleotides before this position resemble BA.1, and all those after resemble BA.2.

This recombinant is particularly interesting because of its potential transmissibility. The UK Health Security Agency found that BA.1 was the most transmissible virus in several decades, with some estimates showing two to four times greater infectivity than Delta. BA.2 pushed infectivity even further, yielding a 33% increase over BA.2 according to Charles Schmidt in Scientific American.

Early indications from the United Kingdom suggest that indeed XE, may be more transmissible than prior variants. While less than 1,000 identified cases are confirmed to be the XE variant, genomic comparison between XE and its parental viruses shows that the new recombinant is 9.8% more transmissible than BA.2, a modest increase but a significant one. This was enough for the World Health Organization to issue a formal warning over Omicron as the most transmissible version of Covid to date.

Recent reports highlight the potential danger of yet another variant: BA.2 + L452R. This variant is identical to the BA.2 genome with the addition of leucine to arginine at position 452 (L452R) in the receptor-binding domain of the Spike protein. The L452R mutation is present in Delta, Kappa, and Lambda variants of concern and interest. The mutation increases both the infectivity and virulence of SARS-CoV-2, triggering concern about the potential epidemiology of this newly detected variant.

Early reports of BA.2 + L452R have mostly been isolated to South Africa and are relatively limited. However, if the virus is more severe and infectious, we expect cases caused by this subvariant to rise rapidly.

Ding et al. conducted a study in which they developed an L452R-mutated BA.1 virus to analyze the mutational impact. They found that BA.1 + L452R increased fusogenicity and strengthened the high infectivity of Omicron by enhancing the cleavage of the Spike protein. Additionally, The mutated BA.1 enhanced Omicron infection of lung tissue in humanized ACE2 mice.

We fully anticipate additional Omicron variants to appear over the coming weeks. It will be important to track the course of each variant to determine which, if any, poses the greatest threat.