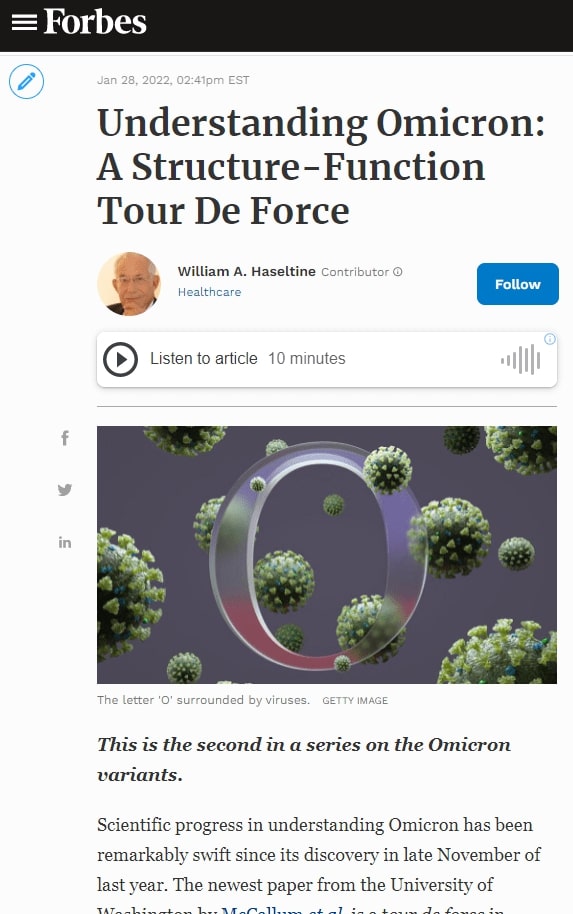 This is the second in a series on the Omicron variants.

Scientific progress in understanding Omicron has been remarkably swift since its discovery in late November of last year. The newest paper from the University of Washington by McCallum et al. is a tour de force in helping us understand the properties of Omicron in molecular detail. It is a marvel of modern science that such depth and understanding of a new form of a dangerous pathogen can be unraveled in such a short time. Just two weeks ago, we wrote our first story about the structural-functional relationship of the genome and proteins of the Omicron variant infecting the United States and most of Europe at that time.

In previous weeks, there was little appreciation of the potential importance not only of the predominant form of the Omicron variant, now called BA.1 but of its sibling variants—BA.2 and BA.3—that arose simultaneously and are now a topic of great interest as BA.2 is on the rise.  This series discusses what’s known about these three variants in more detail.

McCallum and colleagues employed two techniques to understand the structural-functional relationship of mutations in the Spike protein of BA.1: cryo-electron microscopy and X-ray crystallography. Both of these techniques can elucidate the structure of proteins at near-atomic resolution.

One of the outstanding questions of Omicron is why it is so much more transmissible than the original Wuhan strain or any of the following variants: Alpha, Beta, Gamma, and Delta. The initial thought is that the properties of the Spike protein, particularly the affinity of binding to the ACE2, would reveal the answer. McCallum et al.’s work reflects what other studies have found. Omicron binds the ACE2 receptor less tightly than many previous variants and only about two and a half times as tightly as the Wuhan strain. Molecular analysis of the Spike protein reveals why this is the case.

In conclusion, the Omicron receptor-binding domain affinity does not fully account for the variant’s increased infectivity. For example, the Beta variant binds to the ACE2 receptor more tightly than Omicron it is not noticeably more but it is substantially less transmissible.

The ability of Omicron to evade the immune response, elicited either by natural infection or by vaccination, is now legendary. Although people who have recently been triple vaccinated have some protection against Omicron infection, the protection from natural or vaccine-induced antibodies fades to close to zero between three and five months. It is essential to distinguish between protection from transmission and serious disease. Most, if not all, vaccines provide substantial protection, in some cases up to 90% or greater, from hospitalization, serious illness, and death for a year or more.

The study provides a detailed explanation at an atomic resolution of how viruses evade natural immune defenses and monoclonal antibodies in an elegant atom by atom tour. The work also describes why at least one FDA-approved monoclonal antibody, sotrovimab, maintains much of its activity.

Glycine to aspartic acid at position 142 (G142D) and deletion of positions 143 to 145 (del143-145) account for evasion from neutralization mediated by antibodies that recognize the N-terminal domain specifically.

In conclusion, the molecular analysis provides a very firm basis for understanding the ability of Omicron to view evade both natural, vaccine-induced natural, and monoclonal antibody neutralization.

Another prominent feature, which has come as a great surprise to those who study the virus, is that the route of entry for the Omicron family of viruses is remarkably different from that of previous strains. Those viruses enter membrane-to-membrane, which occurs after binding. Two proteolytic cleavage events release the fusion peptide, forming a membrane bridge between the virus and the cell. This allows the virus nucleic acids to enter the cell and begin replicating.

Such is not the case for the Omicron family, which enters via the endosomal pathway. The whole virus enters the cell in a bubble instead of membrane entry. Once within the bubble, the virus can break through and spread.

This work is a dramatic advance in our knowledge of the details of Omicron. McCallum et al. elucidate some of its most outstanding characteristics, differentiating from its predecessor variants of concern. However, many mysteries remain. Why this virus is so much more transmissible does not seem to be a property solely of the Spike protein. We note that several other mutations in the other proteins in the genome and silent mutations may alter regulatory sequences, potentially accounting for increased transmissibility.

This leads to an interesting comparison over time between Omicron and Delta. A recent study by Hay et al. noted that Delta infections yield a greater viral load than Omicron, and infection durations are typically longer in Delta. However, Omicron’s incubation period is shorter than Delta by roughly a day, meaning after initial infection, a host with Omicron is infectious to others faster than Delta.

Another mystery is Omicron’s reduced syncytia formation. Once a cell is infected with SARS-CoV-2 or some other dangerous pathogens, it can fuse with neighboring cells in an evet called syncytia formation. Therefore, syncytia formation is typically associated with pathogenicity. However, the mutations in the Spike protein, particularly those in the furin and fusion regions, lead to reduced fusogenicity, meaning fusion is less efficient. This is likely what leads to the endosomatic entry. But how this virus came to develop these attributes, we do not know, as most variants to this point of the pandemic have continued to grow in pathogenicity, not reduce.

A third mystery is why this virus is less likely to induce hospitalization and death. Some speculate that the requirement for endosomal entry and the absence of cell-to-cell fusion may be part of replicating preferentially in the nasopharynx instead of the deep lung. The speculation suggests that the requirement for endosomal entry is one reason omicron is less pathogenic. Although there may be some merit to the argument, recall that SARS-CoV, the virus responsible for the SARS epidemic, also enters cells via the endosome, not by fusion. SARS-CoV is highly pathogenic, killing about 4% of young adults and 45% of those over 65. The deep lung pathology of SARS resembles that of Covid-19.  I doubt that the difference in the pathology of Omicron virus earlier variants of SARS-CoV-2 is due solely to differences in the spike protein.

We have much more to learn about the function of the exterior glycoproteins and the 29 other proteins of SARS-CoV-2.