Waiting In The Wings: A Potential New Variant Of SARS-CoV-2 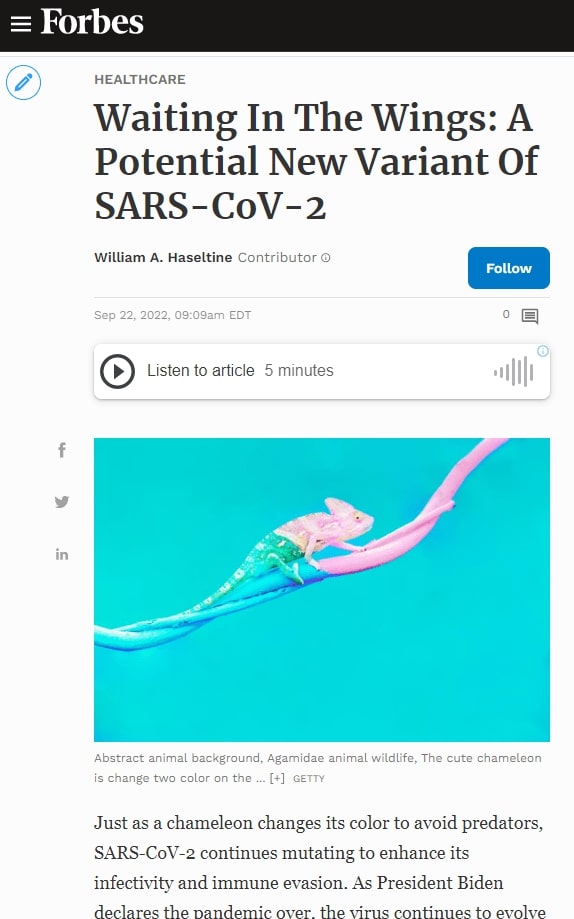 Just as a chameleon changes its color to avoid predators, SARS-CoV-2 continues mutating to enhance its infectivity and immune evasion. As President Biden declares the pandemic over, the virus continues to evolve and infect steadily. 2022 is the year of the Omicron family of variants, and another version has emerged, adding itself to the evergrowing list. Here, we describe the new Omicron variant, BA.2.75.2, and why we caution it at this early stage of its detection.

As its name implies, BA.2.75.2 is derived from its parent: BA.2.75. At the time of writing, BA.2.75 accounts for less than 1% of global SARS-CoV-2 infections, though the ancestral BA.2 variant drove the major wave of infections in early 2022. Why are we interested in BA.2.75.2 if its direct parent is not widely prevalent? The answer lies in its immune evasion. BA.2.75 is among the most immune evasive SARS-CoV-2 variants, evading both the host immune response and antibody responses from vaccines and monoclonal treatments.

The BA.2.75.2 variant takes the blueprint of its parental lineage and adds three new mutations to the landscape, notably located in the spike protein, one of the major players in immune evasion.

The third mutation lies far from the receptor binding domain in the S2 subunit of the spike. S2 is the area closer to the membrane of the spike, impacting fusion post-contact with the host cell. Mutations in this region are much less common than in the receptor-binding or N-terminal domains. The mutation, D1199N, may have several effects on fusion and immune evasion, but more research would be needed to say definitively.

No new mutations are found outside the spike protein. We discussed the ancestral mutations in BA.2.75 that were passed down to BA.2.75.2 in a previous article.

Among commercial antibodies, Bebtelovimab is the only treatment that neutralizes BA.2.75.2. GSK’s S2K146 antibody mildly neutralizes the variant, and all others do not neutralize to a significant extent.

There are many broadly neutralizing antibodies in production around the world that target conserved residues in the SARS-CoV-2. The correct combination of such antibodies could neutralize BA.2.75.2 with solid efficiency. For example, the combination of Li et al., Dacon et al., and Bebtelovimab, which we know, neutralizes BA.2.75.2 substantially. The only overlap between BA.2.75.2 mutations and the residues targeted by this combination lies in the receptor-binding domain, which Bebtelovimab overcomes with strong efficiency.

We also note emerging cryptic virus lineages from wastewater that share many similarities to BA.2.75.2. There are at least 11 consensus mutations between the cryptic viruses and this version of Omicron solely in the spike protein from positions 413 to 505. There are certainly many more mutations throughout the genome that align with BA.2.75.2 that are not yet available. The similarities suggest that Omicron variants are widely pervasive throughout the United States and novel versions of Omicron will continue to arise as infections continue.

Ultimately, time will tell if BA.2.75.2 becomes the next to trigger a significant wave of SARS-CoV-2 infections. We must remain vigilant, as a new wave is more likely than not with the continued evolution of the virus and the return to regular operation so much of the world is undergoing.