Will Covid Overwhelm Our Vaccines? 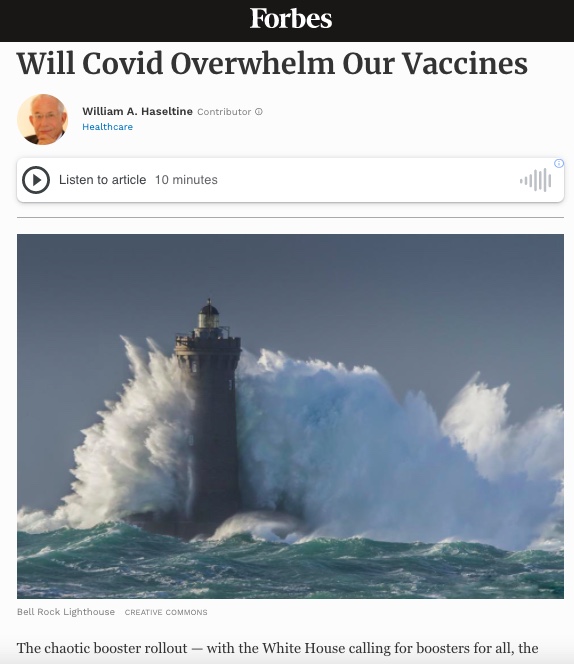 The chaotic booster rollout — with the White House calling for boosters for all, the FDA recommending them only for a few, and the CDC overruling both to provide them to some but not everyone — left many confused over vaccine protection. The vaccines work, but not equally for everyone. Determining how effectively your vaccine may be protecting you from symptomatic illness, severe disease, or death is not a simple yes or no equation — it’s conditional.

Like most other vaccines, Covid vaccines don’t act as a foolproof barrier to infection but rather as a fire alarm. The virus enters your body, vaccine-induced antibodies quickly recognize the threat, and they launch an all out attack to stop the virus from replicating and rid it from your system. Even though you may have technically become infected, the infection is non-productive and you never become symptomatic or ill. That is successful vaccine protection.

With that in mind, the first condition of Covid vaccine success is the development of a high concentration of antibodies that can detect SARS-CoV-2 infection and prevent the virus from replicating. Right now, two doses of an mRNA vaccine produces a high level of neutralizing antibodies that can recognize most known variants of SARS-CoV-2 and, in the months immediately after the second dose, effectively clear the virus before a person becomes sick. For a select few, like some recent organ transplant recipients, the vaccines don’t achieve this goal. But for most, two doses of the mRNA vaccines work.

The challenge though, is time. Antibody levels generally spike immediately after infection or vaccination and then fall over time. All of us can expect our initial antibody levels to drop eventually, somewhere around five to eight months, but for some of us — those with weaker immune systems either from age or other illnesses — those levels may drop sooner and more quickly. We also know that our antibodies perform less effectively against some SARS-CoV-2 variants, even among the healthy. Against some variants, effectiveness drops just four months after the second dose.

That leads us to the second condition, which is tied to the first: the number of doses required to reach high levels of neutralizing antibodies over an extended period of time. Initial FDA emergency approval was granted to the mRNA vaccine manufacturers for a two-dose Covid vaccine, given the urgent need to contain the spread of the pandemic and early clinical trial results. But more recent studies have shown that a third dose can significantly improve both the potency and breadth of neutralizing antibody levels, providing even greater protection against all known variants than occurs after the second dose. Even if the initial spike in antibodies drops, it is dropping from a much higher level, meaning it will take longer for the vaccine to lose its effectiveness.

Knowing this, I would say that you can consider yourself protected against Covid-19 only if you meet both the first and second conditions on this list — if you received your first two vaccine doses more than four or five months ago, you need a third dose to be sure that you have a high enough level of neutralizing antibodies to knock out the virus before you become ill. The mRNA vaccines are, in reality, a three dose regimen, not two.

Now we move to the next condition: long term immunity. The initial surge in antibody protection after vaccination or infection for any disease is always expected to fall — our bodies couldn’t possibly continue churning out antibodies to combat every threat they have ever encountered. But we have a longer term immune response that steps in, led in part by memory B cells. These B cells are a little like bouncers standing inside the door of your local bar. They’re often at rest but always on the alert for threats. If they’ve seen an unwelcome visitor from the past return, they try to kick them out immediately before they can cause any trouble. The way B cells do it is by kicking off a series of reactions that generates a new surge in antibody production to knock out the virus. But this effort takes time — first the time needed to detect the threat and then the time needed to generate enough antibodies to overwhelm and overcome the virus.

When it comes to long term immunity for Covid-19, the question — still unanswered — is whether our long term memory cells are able to act quickly enough to mount an immune response. For some diseases, like the measles, vaccine-induced immunity lasts for nearly a lifetime or, as with diptheria, over multiple years. For viruses like the flu, however, vaccine protection is much shorter lived not because of any inherent failure of our immune system, but rather due to the nature of the virus. Like Covid, the influenza virus mutates and adapts; every mutation is like a new disguise the virus wears to enter our bodies undetected. The bouncer B cells may eventually recognize the virus as a threat, but it takes them longer, giving the virus more time to replicate and spread before a person even knows they’re infected.

During that extended period of time the virus can escape to infect others, which is a critical challenge to controlling new infections and the spread of disease. The other major challenge, more critical to the person infected, is that by the time the B cells notice the threat and mount a response, the virus may have replicated to such an extent that it becomes even harder for the immune system to knock it out. This explains why people who have been vaccinated can still become quite severely ill from infection.

Given our nascent understanding of long term immunity against SARS-CoV-2, none of us can yet know whether this condition will be met over time. What we can expect, however, is that at least in the short run we will need regular Covid vaccines, beyond the first three doses. We’ve already become accustomed to annual vaccinations for the flu. Each year, the vaccine primes our bodies for the most likely influenza strains circulating that year, provoking an initial vigorous antibody response and giving our long term memory cells an indication of the disguises — or rather the mutations — the virus is wearing this year. Not only does this reduce the reaction time for our memory B cells, some studies also suggest that the repeated exposures help us build better and broader immune reactions.

The final condition to consider when discussing vaccine protection is age and the quality of your immune system. We know the effect of aging on the immune system in general and on long term B cell production. A Covid-19 study from earlier this year shows the magnitude of the memory B cell response after a second mRNA dose was lower with increased age, confirming age as a key variable in vaccine-induced immunity. We also know there are other conditions that can weaken the immune systems in people of any age, such as inflammatory conditions and inherited predispositions to infectious diseases often caused by a genetic inability to mount a robust interferon response. What that means in terms of vulnerability to death and severe disease is still unclear, but this much is true: if you are older than 65 you are not going to have as robust an initial response to the vaccine and your long term immunity may be diminished too.

Here’s what all these conditions of vaccine protection described above mean for the average person.

If you meet all the conditions — you are young, with a healthy immune system, have received three doses of the mRNA vaccine and return for regular Covid vaccinations if and when future boosters become available —- you will most likely be very well-protected against symptomatic illness and disease, but you can still become infected and spread the virus. With this in mind, be cautious still with your interactions and do your part to prevent others who may be more vulnerable from becoming infected.

If you meet some, but not all of those conditions — you are older but have received all three doses, for example, or you are younger but don’t yet qualify for a third dose — you are likely well-protected from the worst Covid can offer, meaning severe illness and death, but may still be susceptible to symptomatic illness and the threat of long-term complications from milder infections. Consider continuing other protections like mask-wearing and avoiding large, crowded gatherings at all times, even if these requirements are no longer the norm for those vaccinated where you live.

And finally, if you’ve chosen to forgo vaccination or decided not to get your third dose, consider yourself at risk of symptomatic or severe disease and, unfortunately, death. Plan your outings and engagements wisely and use other means of protection at all times. This virus is with us for the long haul. Vaccines may not be foolproof protection but they do offer us remarkable protection, a protection that can save our lives and the lives of those we love around us if we use them effectively.