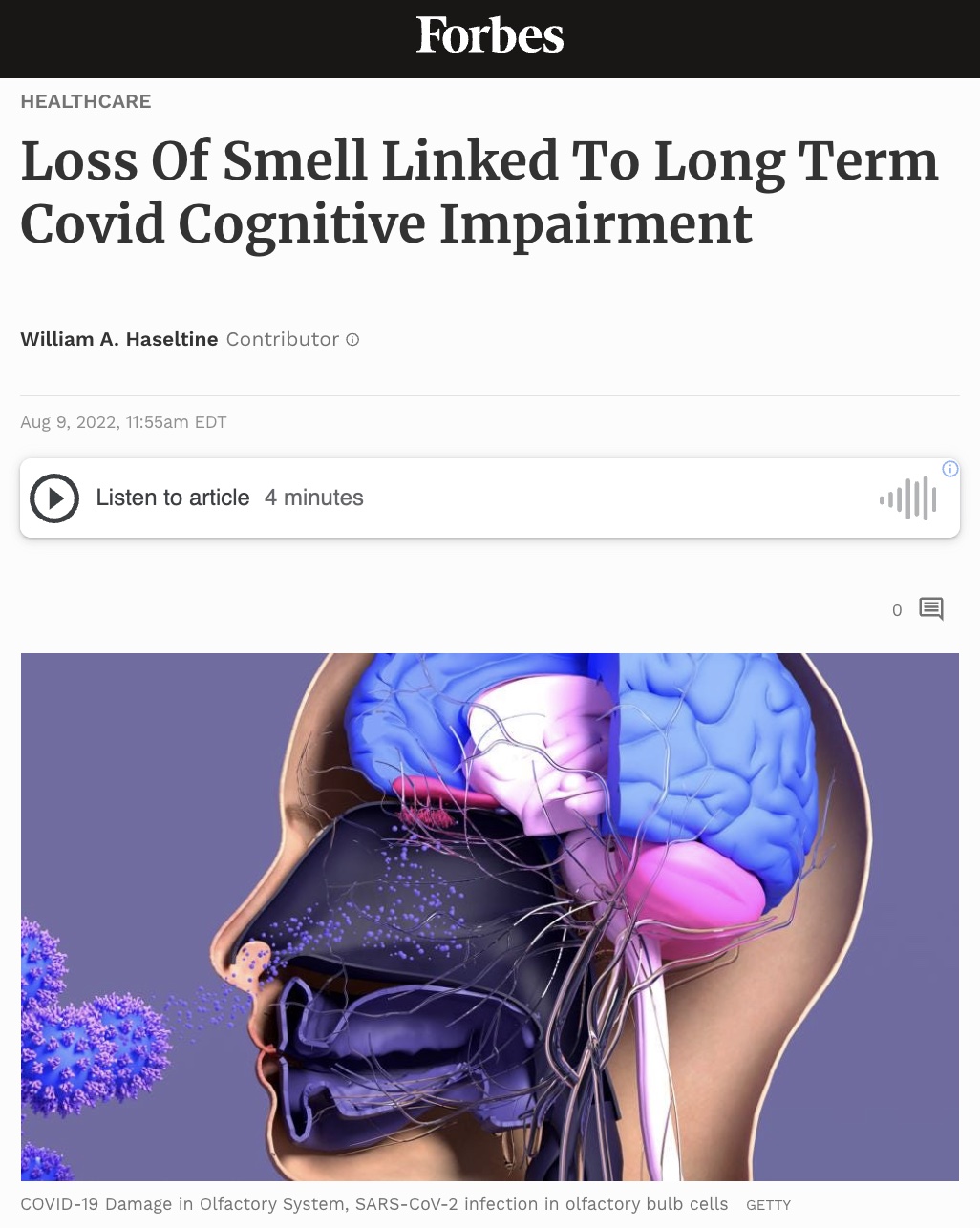 Very little is known about the long term effects of Covid-19, especially in relation to the brain. Who gets what symptoms may feel like a mystery. And with the current seven day average of new cases hovering around 1,000,000 cases worldwide, the issue of long term sequelae only grows more pertinent as infections increase. In this regard, a study presented at this year’s Alzheimer’s Association International Conference (AAIC) may have uncovered a key to solving this riddle: loss of smell.

The Argentinian research team investigated the long term Covid-19 cognitive impairment in older adults through a one-year prospective study design. All 766 participants were randomly invited from the health registry in Jujuy, Argentina, which holds all Covid-19 testing information for its region. Investigators split the group by polymerase chain reaction (PCR) testing status: 88.4% who had Covid-19 and 11.6% without—in other words, the control group.

The adults’ ages ranged between 55 to 95 years old, with the mean age landing on 66.9 years old. More than half of the group, 57% specifically, were female. The group averaged 10.4 years of education; the Argentine education system consists of 12 years of school before university.

The degree of anosmia (loss of smell) was confirmed through an olfactory test. An individual would attempt to identify three distinct odors; depending on the results, the team categorized the anosmia as either nonexistent, mild, moderate or severe.

Study investigator Gabriela Gonzalez-Alemán, PhD, told Medscape Medical News that the participants displayed “a predominance of memory impairment as would be seen in Alzheimer’s disease,” with a large group presenting “a combination of memory and attention problems.”

None of the controls had olfactory dysfunction, but 40% of the study sample notably did. Furthermore, all participants with severe cognitive impairment also had anosmia.

Researchers also collected participant vaccination status through a one year phone survey.  The majority of the participants received vaccinations. Around 71.8% of the study cohort had three vaccine doses, while 24.9% had two. Of those groups, around 12.5% of individuals with three doses were infected, and 23.3% of participants with two doses were reinfected.

Instead of disease severity, loss of smell seems a more promising avenue for predicting who develops persistent cognitive changes after SARS-CoV-2 infection. The presented study results provide an intriguing foundation for further investigation. As described by Dr. Gonzalez-Aleman in Neurology Today, anosmia could be a sign of SARS-CoV-2 infection entering the brain through the olfactory bulb, or a sign of a continuing disease process after infection. With additional research, the hope would be to more thoroughly understand this correlation and thus develop a means to prevent such brain damage.