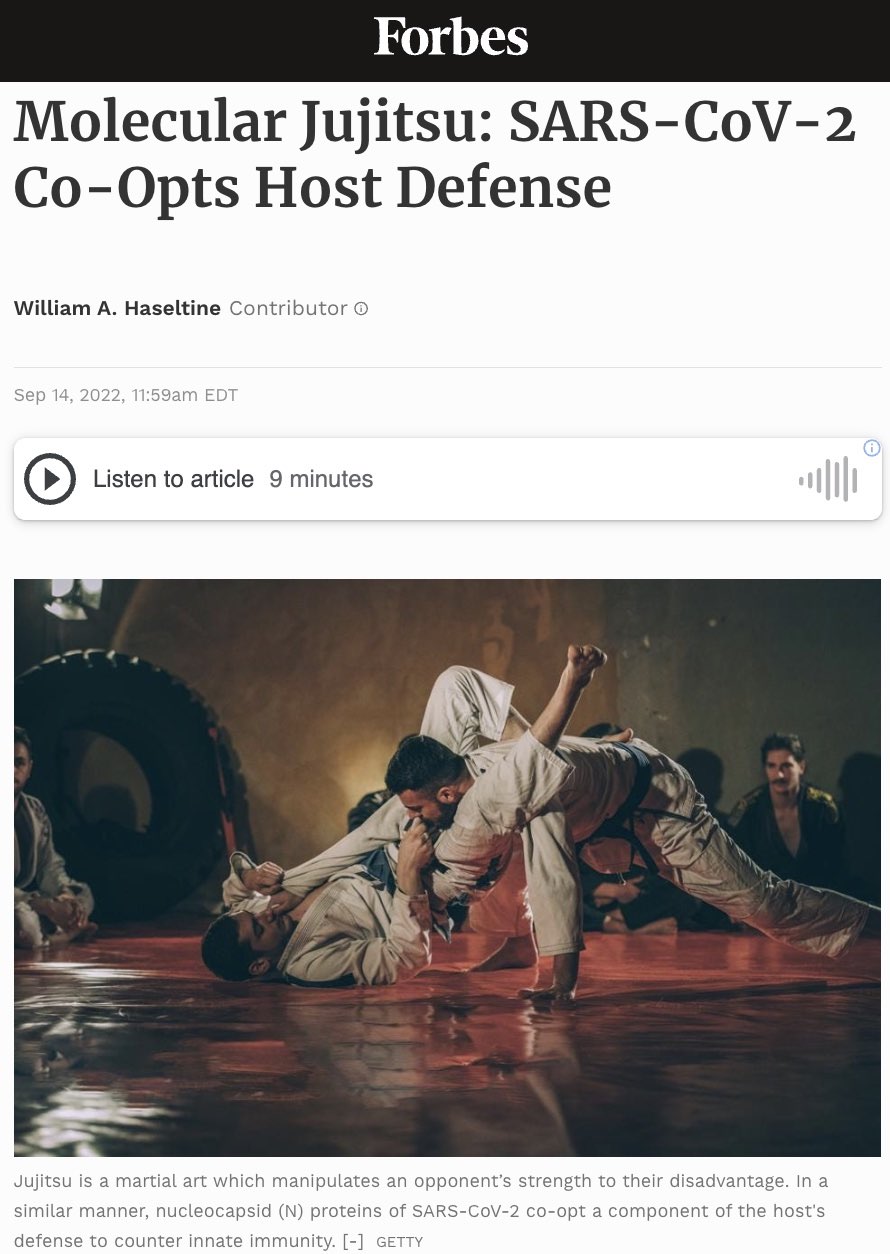 Host defenses and the viruses countermeasures are critical to understanding infectious disease. To survive a host must be able to ward off the pathogen. In turn the pathogen must be able to counter the host defenses. In the midst of the Covid pandemic, we are living with the consequences of this eternal host/pathogen struggle. We adapt to the virus through our innate, acquired, medical and social defenses. The virus simultaneously adapts to our evolving response.

Science brings an important weapon to this battle by understanding the means by which the SARS-CoV-2 virus counters our host defenses. In an earlier book, Natural Immunity and Covid-19, we reviewed numerous means by which the SARS-CoV-2 virus counters our innate immune defenses and how drugs may play an important role in tipping the balance in our favor. Here we describe a recent study published in the journal Nature which investigates one of the virus’s central means to counter innate immunity: the caspase-6 defense back-flip.

Innate immunity is our first line of defense against new and recurring infections. Innate immunity relies upon an elaborate network of sensors to detect the presence of foreign molecules and to trigger nonspecific defenses against any invader. Rapid suicide of the infected cell is one of many effective innate immune strategies. An infected host cell triggers its own destruction before the virus has a chance to multiply and spread throughout the body. The process is mediated by proteins called caspases.

Caspases modulate three specific forms of cell death: apoptosis, programmed cell death without inflammation; necroptosis, cell death accompanied by inflammation; and pyroptosis, cell death accompanied by fever death. These enzymes degrade multiple structures within cells to accelerate cell death. Caspase-6 is one such immune defense to infection by a variety of pathogens. For example, caspase-6 is central to our immune defense against influenza.  Cells which lack caspase-6 are hypersensitive to infection and death by influenza viruses. Absent caspase-6 cells and animals normally resistant to influenza quickly succumb when challenged.

Coronaviruses are an anomaly. Chu et al. report that caspase-6, rather than resisting coronavirus infection, is in fact required for successful replication of SARS-CoV-2,  SARS-CoV-1, MERS, and several human cold-causing coronaviruses.  Contrasting its role in influenza viruses, caspase-6 appears to be a necessary component in the replication. The investigators provide a detailed description of this miraculous jujitsu using a key component of the host’s own immune defense to defeat that very defense.

The nucleocapsid protein (N) plays a key role in this remarkable saga. The N protein is the most abundant protein found in infected cells. This protein serves at least two essential roles in the virus life cycle. First and foremost, the N protein binds to viral RNA and packages it into the mature virus particles. But that is not all it does. A series of experimental studies on SARS-CoV-2 and other coronaviruses illuminates another role of the N protein: suppression of the innate immune response.

Earlier studies found that caspase-6 can cleave N proteins of the MERS and SARS-CoV-1. The study described here extends those results to SARS-CoV-2.

Chu et al. reveal that caspase-6 cleaves the SARS-CoV-2 N protein—both as an isolated protein as well as in cell culture. Inhibiting caspase-6 similarly inhibited N protein cleavage. They further outlined that N protein cleavage is specific to caspase-6 and to no other cellular caspase.

A mystery remained: how does cleaving N proteins potentiate virus replication? Chu et al. answered this question by generating N protein mutants to potentially alter known caspase-6 cleavage sites. The team identified the cleavage site in SARS-CoV-2 and noticed its location in the linker region between the two distinct ends of the N protein (see Figure 3B). They found only a small fraction of the total N protein produced by the infected cell is cleaved; the vast majority remain intact and participate in the assembly of infectious virus particles.

When asked which of the two protein fragments were responsible for immune suppression, Chu et al. made a somewhat puzzling discovery. Both halves—the amino terminal fragment (amino acids 1-215) and the carboxyl terminal fragment (amino acids 216-419) were equally immune suppressive. This is surprising as the two proteins are different in sequence and structure (Figure 3A, 3C).

The team demonstrated that both cleaved N products equally suppress innate immunity by acting as interferon antagonists for IRF3. Both fragments selectively bind IRF3 as judged by co-immunoprecipitation. Both also inhibit IFR3 phosphorylation and translocation into the nucleus where it’s required for initiation of interferon messenger RNA.

Caspase-6 is required for virus replication and pathogenesis

Is N protein cleavage required for immune suppression? The authors find that, yes, this is the case. Mutations in N that prevent cleavage abrogate N immune suppression. Similarly drugs that inhibit caspase-6 almost limit viral replication in cells and in infected animals.  Caspase-6 knockouts in mice SARS-CoV-2 replication and pathogenesis. This result emphasizes the difference between the influenza and coronaviruses, as the same knockout stimulates influenza replication and pathogenesis.

Genetics of the N Protein

A salient feature of the Covid pandemic is the replacement of one viral variant for another (Figure 4). Successive variants evolve along several quasi-independent dimensions. Most famously, variants alter recognition of neutralizing antibodies that bind to the exterior spike protein (reference Figure 1). Recently we have come to recognize additional properties of each new variant. Each new variant replicates more rapidly in the infected host, shortening the incubation period from infection to transmission. Moreover, each new variant suppresses interferon induction more vigorously than its predecessor.

Jennifer Doudna’s laboratory made a remarkable observation. All successful SARS-CoV-2  variants have mutations in the linker region of the N protein (Table 1). Syed et al. report these mutations singly and collectively accelerate the rate of virus replication both in the context of virus-like particles and in isogenic virus strains in cell culture.

We note that these mutations are located in the linker region, proximal to the N protein caspase-6 cleavage site. Specifically, they reside between amino acids 198-205, close to the amino (N) terminal to the amino acid 215 (see Figure 3B). We speculate that these mutations accelerate caspase-6 cleavage of the N protein, thereby accounting for the observed increase in suppression of interferon induction and increase in replication/fitness of the variants. Such is an easily tested hypothesis.

We postulate that fitness is a complex property of each variant conveyed by multidimensional adaptation. Examples include mutations that change protein sequences as well as those that alter RNA cis-acting sequences which affect virus replication and transcription.  We suggest that, as this elegant work on the N protein reveals, viral fitness be considered in the context of all the virus genes and cis-acting regulatory sequences in addition to the alterations in Spike protein that have received so much attention to date.

Implications for Therapeutics and Beyond

This study emphasizes the importance of the N protein in the life cycle of the virus. Without caspase-6 or the proper cleavage site, the SARS-CoV-2 virus is not capable of replicating well in cells. This raises the possibility that drugs that inhibit caspase-6 should  dampen SARS-CoV-2  replication. Other targets—such as N protein interaction with IRF3—should be explored as well.