New And Effective Monoclonal Antibody Treatment For Ebola On The Horizon 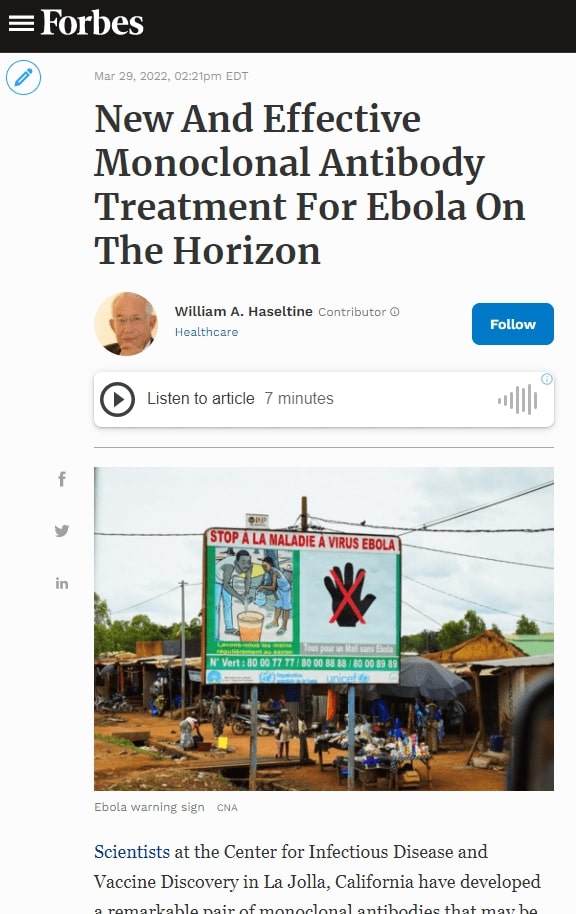 Scientists at the Center for Infectious Disease and Vaccine Discovery in La Jolla, California have developed a remarkable pair of monoclonal antibodies that may be the long-sought answer for effective treatments of multiple ebolavirus strains. Ebola poses a threat to human health not only in Africa, where it originates but with the possibility that it may spark another pandemic. We can all recall the fears of Ebola as it spread from the African continent to international shores. Fortunately, these cases were isolated and a pandemic did not ensue. There are no guarantees that ebolaviruses could not be the cause of the next global pandemic.

At present, our tools to confront Ebola are lacking and not fully effective. Current vaccines only treat one strain of ebolavirus, EBOV, and only with partial protection that fades over time. There are mRNA vaccines in development to treat ebolavirus, but it remains to be seen if those will have lasting durability against disease and death.

Although many small molecule drugs have been tested for efficacy, none have yet been approved. The most effective drug against Ebola is Regeneron’s monoclonal antibody cocktail: REGN-EB3. The drawback is that it only protects against one of the major strains of ebolavirus, leaving strains like Sudan virus (SUDV) untreated.

The target for neutralizing antibodies in ebolaviruses, much like SARS-CoV-2, is the surface protein that regulates binding cell surface and cell entry. The protein binds receptors on the cell, triggering fusion of the viral and cell membrane, providing an opening for the virus particle to enter the cell. Entry is mediated by the trimeric surface protein of Ebola. There are three glycoproteins to a trimer and each is divided into two separate proteins: GP1 and GP2.

GP1 binds to the receptor, forming a binding pocket while GP2 mediates the fusion of the virus and cell membranes. GP1 is noncovalently attached to GP2, which oversees fusion to the cell surface once receptor-binding is complete.

Milligan et al. isolated B-cell samples from patients within one year of their Ebola infection. They identified 36 mAb candidates. From these, they screened for binding strength to Ebola (EBOV), Sudan virus (SUDV), Bundibugyo virus (BDBV), all members of the ebolavirus genus. They also screened for antibodies that bound outside the ectodomain, meaning they were not restricted to the head and core regions.

Their search resulted in the discovery of two new antibodies: 1C11 and 1C3. Both of these strongly neutralized all of EBOV, SUDV, and BDBV, with the exception of BDBV for 1C3. 1C11 targeted the base region of the ebolaviruses glycoprotein, whereas 1C3 targeted the head region. Milligan et al. note that 1C3 also induces antibody-dependent cytotoxicity, not only neutralizing the virus but also targeting and killing the infected cell.

Figure 2 clearly shows how the Fab fragment of the 1C3 antibody binds to the chalice. Please note that the antibody makes asymmetric contacts, binding overlapping but distinctly different sets of amino acids of the three receptor binding interfaces. 1C3, therefore, has a dual function. The three-face asymmetric binding not only inhibits binding to the cell but also effectively locks GP1 into position preventing fusion. Please note the simultaneous asymmetric binding residues of 1C3 to the trimer below.

There are two reasons this combination therapy is so broadly binding. First, the base region that is bound by 1C11 varies little across ebolavirus strains. Second, while the amino acids of the chalice differ, the 1C3 footprint touches so many residues that the commonalities may compensate for the variation.

Protection From Disease And Death In Rodents And Non-Human Primates

They also tested the combination therapy in vivo on both rodents and nonhuman primates. They first used a mouse-adapted virus. In pretreated EBOV-infected mice, 1C3 and 1C11 provided 90-100% protection from death as compared to the 10% survival rate of the control group. Similar results were found in BDBV-infected mice, in which the combination yielded 100% protection from death. In guinea pigs, neither antibody was effective individually, but the combination protected 80% of subjects for both EBOV and SUDV.

In nonhuman primate models, SUDV and EBOV-infected primates treated with the combination therapy had a 100% survival rate with the viruses being completely cleared according to PCR test between two and three weeks post-infection. The viruses were undetectable only days after inoculation with the treatment.

Milligan et al. also emphasize the restriction of low dosages throughout their testing process as these antibodies can be expensive and would primarily be used in low-income countries.

In a piece of truly excellent work involving antibody isolation, characterization, and animal model work, Milligan et al. present a tour de force. This work provides a key not only for effective treatment for ebolaviruses, but we believe for many other viruses as well. The analog for SARS-CoV-2 would be antibodies that bind across the S1/S2 subunits in a similar fashion, locking the trimer into place. An equivalent may be the camelid antibodies that lock the SARS-CoV-2 Spike protein in place in a similar way, which may be a class of antibodies worth exploring for future treatments.