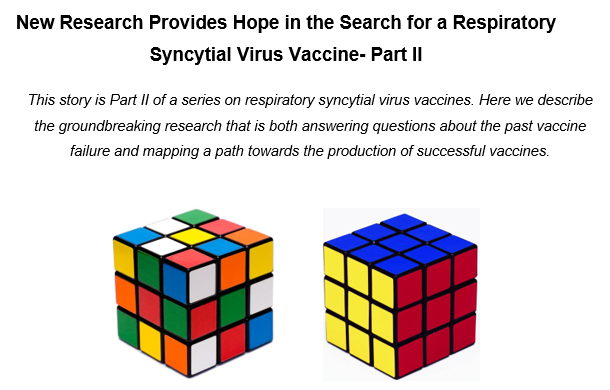 This story is Part II of a series on respiratory syncytial virus vaccines. Here we describe the groundbreaking research that is both answering questions about the past vaccine failure and mapping a path towards the production of successful vaccines.

Respiratory syncytial virus is one of the leading causes of death for infants globally, and a safe vaccine has yet to be approved for use. However, the long hunt for a vaccine may soon be over. The new structure-based vaccine technology behind the recent development of such vaccines holds great promise. In Part I of this series we discussed the magnitude of the disease and severity of its consequences, and here in Part II we discuss the science that underlies the recent advances in search for an RSV vaccine.

Until recently, respiratory syncytial virus has posed obstacles to the technology that has been successful in producing functional vaccines that have succeeded in mitigating the spread and severity of many other infectious diseases. While the search for a vaccine for respiratory syncytial virus has eluded scientists and vaccine manufacturers for decades, just as of recently there are finally some promising vaccine candidates in phase 3 trials. The new structure-based vaccine design technology behind their development will have lifesaving consequences, as respiratory syncytial virus is the leading cause of hospitalizations in children under five, and infants and the elderly are particularly susceptible.

Just over 55 years ago in 1965, a small vaccine trial for respiratory syncytial virus resulted in increased rates of hospitalization and the deaths of two infants from a treatment group of only 23. The disastrous consequences of the trial stunted any further development of an RSV vaccine through the turn of the century. Recent advances in structural vaccine technology mean that vaccines may soon be available, even for young children.

One avenue of structure-based vaccine design technology consists of focusing on the pathogen’s physical form, down to the individual atom. By identifying the structures to which antibodies bind, scientists can then synthesize a replicate of the antigen structure. Formulating vaccines with the engineered antigens will prompt a response of antibody production in the body, priming the immune system to respond swiftly to future exposures. What follows is drawn largely from the research published by Graham, Modjarrad, and McLellan in 2015.

The fusion (F) protein was identified to be the key viral structure to target for RSV. However, we now know that the F protein has two forms, converting from the prefusion state (pre-F) into the postfusion state (post-F). Antibodies target both forms of protein F, but those that bind to the prefusion form are much more effective at neutralizing the virus. Furthermore, the negative effects of the virus can be in part attributed to the non-neutralizing binding of antibodies to the postfusion form. Knowing this, it became clear to scientists that to engineer a vaccine to produce the maximum defense, they should focus on the prefusion antigen structure. The problem with this is that the prefusion F protein is highly unstable. The prefusion state is spring loaded and readily assumes the postfusion state. To incorporate the pre-F form into the vaccine for the purpose of stimulating more impactful antibody production, the challenge is to stabilize the F protein in its prefusion state.

In 2013, researchers at the National Institute of Health’s Vaccine Research Center utilized x-ray crystallography to understand the precise molecular structure of pre-F and post-F forms while bound to one of the recently discovered potent antibodies. Building off previously established research that a virus could be stabilized in its prefusion form and the additional structural information provided by the x-ray crystallography, researchers Dr. Jason McLellan and Dr. Barney Graham with the NIH’s Vaccine Research Center reported that they successfully genetically modified the protein to preserve its prefusion state. To stabilize the pre-F conformation, McLellan and his team analyzed the structure of pre-F for mutations that would be maintain the structure maximizing antibody neutralization. From more than 100 variants, three were found to retain binding capacity to the pre-F-specific antibodies.

The first of these mutation variants, named DS, was formed by substituting amino acids Ser155 and Ser290 for pairs of cysteines which formed stable disulfide bonds. These served as covalent bridges to lock the F protein in its prefusion configuration. The next, termed Cav1, contained the mutations S190F and V207L. Changing a serine to a phenol alanine and a valine to a leucine filled atomic level cavities to increase hydrophobic packing and maintain the structure of the most powerful antigenic site. The third variant, termed TriC, involved an F488W mutation, stabilizing the hydrophobic fusion peptide. However, after testing different combinations of the three mutations, it was clear that the DS-Cav1 combination was superior in maintaining stability under extreme conditions such as temperature, pH, osmolality, and freeze-thaw, all of which are important for vaccine manufacturing. When put to the test, the DS-Cav1 model of the stabilized pre-F form induced extremely high antibody levels as compared to the post-F form in an animal trial, confirming the research and paving the way for new RSV vaccine options.

The stabilization of the prefusion form is an essential development because this pre-F form of the protein contains more effective antibody neutralization target sites. As shown above in Figure 3, the red targets, labeled Site Ø, are rated “outstanding” in value as a neutralization site. However, these are only present in the prefusion state. In the postfusion state, which occurs after the viral cell undergoes a conformational change and makes physical contact with the host cell, these essential binding sites are no longer present. Prefusion F also has additional neutralization target sites which are not yet named but shown in dark orange in Figure 3. These “excellent” neutralization value sites are also only present on the prefusion form, demonstrating the importance of the protein modifications that succeeded in stabilizing protein F for vaccine development.

It has been over half a century since the initial RSV vaccine candidate performed so poorly, resulting in higher levels of hospitalizations and mortality for the children vaccinated over the control group. With the recent developments in structure-based vaccinology, we have an explanation of what went wrong. The evidence now suggests that the 1965 RSV vaccine induced high levels of antibodies binding just to the post-F state, not the pre-F state. Since only the prefusion form contains the most neutralization-sensitive binding sites, the vaccine was not effective. Scientists at the time were unaware of protein F’s different forms, and this led to an immune response of hyper production of antibodies that bound to the virus without actually neutralizing it. These non-neutralizing antibodies primed the young children who had not yet been exposed to RSV naturally to have an overly strong inflammatory immune response once they were exposed to the virus after vaccination. In some cases, this resulted in severe respiratory symptoms and serious illness requiring hospitalization. This tragic first vaccine trial in conjunction with the recent groundbreaking structural based research emphasizes the importance of having a fundamental understanding of the molecular structure. The recent advances in development of an RSV vaccine would not be possible without the current deep understanding of the RSV virus at an atomic level as this fundamental research is essential for successful vaccine production.

In Part III of this series, we will describe the strategies behind vaccine development, as well as the current respiratory syncytial virus vaccines currently in late-stage clinical trials with the potential to save many lives.