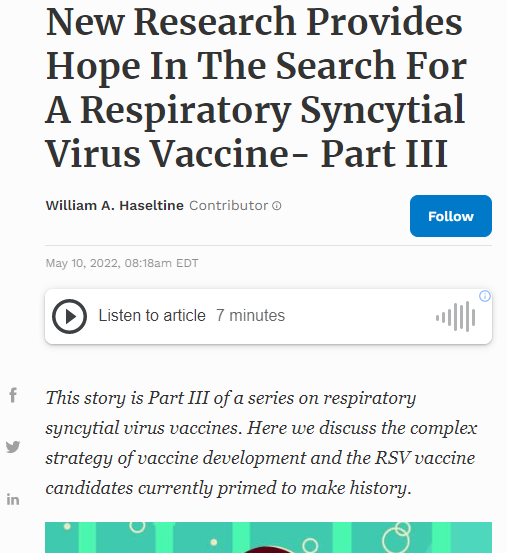 This story is Part III of a series on respiratory syncytial virus vaccines. Here we discuss the complex strategy of vaccine development and the RSV vaccine candidates currently primed to make history.

Respiratory syncytial virus is one of the leading causes of death for infants globally, and a safe vaccine has yet to be approved for use. In Parts I and II of this series we discussed the magnitude of the disease and the science that underlies the recent advances in search for an RSV vaccine. In a triumph over the tragic history, many companies have recently taken on the challenge of producing an RSV vaccine, most of them using the new protein stabilization technology detailed in Part II of this series. By genetically modifying the key antibody target for effective neutralization as pre-fusion state glycoprotein F, it became possible to synthesize a replicate of the antigen structure for vaccine production.

Part of the difficulty in developing a vaccine against respiratory syncytial virus available for young children is due to the complexity of vaccine development. There are strict stages of testing for safety and efficacy that must be observed. As a vaccine candidate progresses through clinical trials, it begins in Phase 1 with generally around 100 volunteers. This trial is predominantly focused on confirming the safety suggested by animal studies. It usually only includes healthy adults from a narrow age range to minimize confounding variables or adverse reactions. With a few thousand subjects, Phase 2 is larger and intended to confirm safety data and begin to measure efficacy. In Phase 3, often tens of thousands of volunteers receive the vaccine in order to provide a large enough data set to confirm that the vaccine confers significant protection against the pathogen. Phase 4 consists of ongoing studies post approval. Vaccine clinical trials are often slow-moving because significant time and resources go into analyzing the data before the money necessary to progress to the next phase is invested.

As of September 2021, there were 20 proposed or active vaccine clinical trials, some of which are designed for at-risk adults, some for pregnant women, and some for children. Companies in the spotlight recently for the production of a COVID-19 vaccine such as Pfizer, Moderna, Johnson & Johnson, and AstraZeneca are leading the charge along with others such as GSK and Janssen, most of which had global phase III trials underway by the end of 2021.

Janssen’s vaccine is meant for use only in older adults, while the GSK and Pfizer vaccines, the latter of which recently reported 85% efficacy in a phase 2b trial, are for use in pregnant women. The intention is to provide protection during pregnancy that will persist in newborns throughout their first six months of life, the most vulnerable period. In March 2022, Pfizer’s vaccine RSVpreF received Breakthrough Therapy Designation from the US Food and Drug Administration (FDA), which should expedite the process of further review and approval of the vaccine.

With results published in the New England Journal of Medicine in April 2020, 406 pregnant women participated in a phase 2b trial, with 80.5% receiving the Pfizer RSVpreF vaccine. It was documented that most post-vaccine reactions were mild to moderate, with women receiving the vaccine version without aluminum hydroxide reporting lower incidence of local site reactions. For both the pregnant women and their post-vaccination born infants, incidences of adverse events were comparable in the vaccine and placebo groups, supporting the safety of the vaccine. Promising efficacy results showed significantly higher ratios of 50% neutralizing antibodies in infants of vaccinated mothers as compared to those receiving just placebo.

The earliest vaccines will likely be approved for use only in adults, even though infants in their first year of life of the most vulnerable to RSV infection. The specific time period is between 3 to 8 months, because it is during this timeframe that maternal antibodies resulting from previous natural infection with RSV of the mother are no longer very effective. However, vaccination of infants during this stage is still a complicated and precarious process, in part due to the presence of circulating RSV maternal antibodies, even if levels have decreased. This is why maternal vaccination is a competitive alternative route until a safe vaccine for infants is approved for widespread use. Maternal vaccination will improve the efficacy of the RSV antibodies naturally received by newborns, granting them additional protection starting at birth.

Despite the increased difficulties, promising late-stage clinical trial data provide hope that there will be a respiratory syncytial virus vaccine option available to young children in the near future. As a direct prophylactic option, AstraZeneca and Sanofi developed a single dose monoclonal antibody treatment with an extended half-life of efficacy compared to the current monoclonal antibody treatment in use, Palivizumab. Termed Nirsevimab, this preventative treatment is designed for all infants in their first year of life experiencing their first RSV reason, as well as those in additional years who are at higher risk of serious disease. The results of a Phase 3 clinical trial published in the New England Journal of Medicine demonstrated that a single injection of Nirsevimab prior to RSV season was able to protect healthy infants, both term and late pre-term, from serious lower respiratory tract infection as a result of RSV infection by 74.5%, a significant efficacy rate.

While the search for a vaccine for respiratory syncytial virus has eluded scientists and vaccine manufacturers for decades, there are finally some promising vaccine candidates and other preventative treatments in phase 3 trials. It looks as if there may be a vaccine in the foreseeable future, within the next few years. The next question is what availability will look like in high, medium, and low income countries. Childhood vaccines have been one of the singular successes of global health and this affirms hope that the success will be extended to new safe and effective respiratory syncytial virus vaccines.