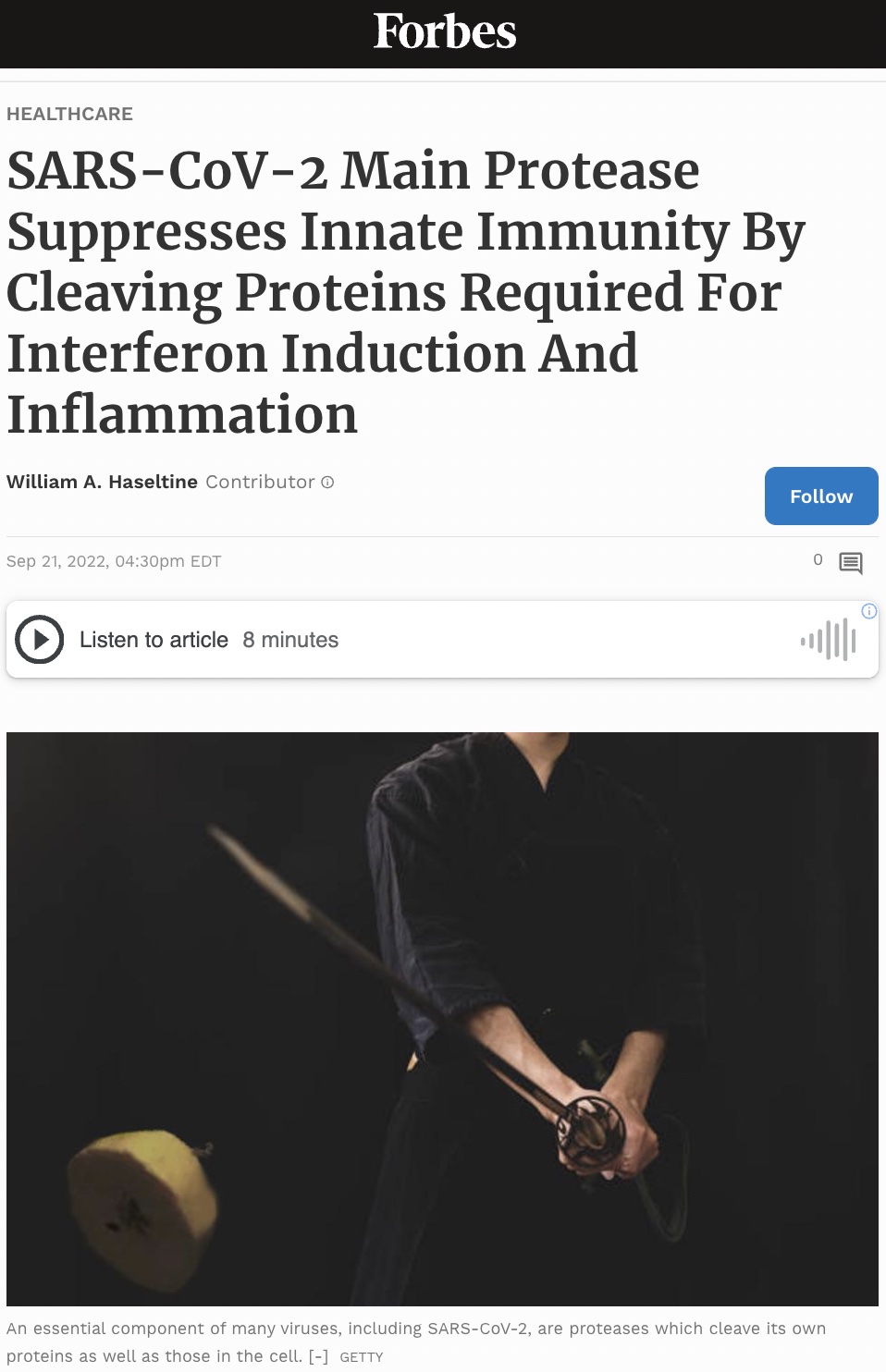 Many viruses rely on proteases to process polypeptides into smaller proteins required for replication and virus production. SARS-CoV-2 is no exception. It contains two proteases in the long open reading frame of ORF1A1B that encode for 15 proteins which need proteolytic processing. Main protease, or Mpro, is the cysteine protease responsible for most of these cleavages. A series of previous studies have shown that this target site for Paxlovid plays an additional role in the virus life cycle: suppression of the innate immune system. In a previous publication we described how SARS-CoV-2 is a master at suppressing the innate immune system—both through poly-functional proteins, proteins serve both more than one function in the virus life cycle, as well as a series of accessory genes which primarily alter innate immunity. Here we discuss studies on main protease (Mpro), and its activities.

FIGURE 1: Mpro, denoted as NSP5, disrupts the interferon pathway of innate immunity at three previously known points. The protease interferes with typical functions of RIG-I, TBK1 and IRF3, which can lead to consequences in downstream signaling and interferon production.

In addition to cleaving virus proteins, Mpro released into the host cell has the potential to cleave cellular proteins. In this study published in the journal Proteomics, Koudelka et al. address what cellular proteins can be cleaved by Mpro and if these cleavages may partly account for the ability of SARS-CoV-2 and other coronaviruses to suppress innate immunity.

To do this, the researchers employ unbiased techniques to analyze the structure and binding of SARS-CoV-2 Mpro in lung cells. The technique, coined N-terminomics, identifies the substrate (protein target for Mpro) and corresponding cleavage site. With this, the team could better understand how SARS-CoV-2 Mpro suppresses host immune responses.

According to their research, Mpro is able to cut several cellular proteins involved in innate immunity. As a result, this tampers with innate immune responses which stimulate interferons, proteins which signal the presence of foreign invaders; induce interferon-stimulated genes to inhibit viral replication; and stoke inflammation to counter present viral intruders.

FIGURE 2: Nonstructural protein 5, or Mpro, can blunt the branch of innate immunity which stimulates inflammation. NEMO, short for NF-κB Essential Modulator, is a crucial component to this defense.

NEMO, short for NF-κB Essential Modulator, is a protein which is essential for inflammation. As seen in Figure 2, NEMO must be activated in order for several other proteins in the inflammation cascade to function. Koudelka et al. discover that Mpro cleaves NEMO between Q231/V232, likely blunting this innate immunity pathway. This could correlate to observed symptoms in COVID-19 patients. A disrupted NF-κB pathway can lead to overactive inflammation, as often observed in chronic inflammatory diseases. Following this line of thought, Mpro could possibly contribute to the heightened inflammatory response seen in those with COVID-19.

NEMO is not the only host protein that Mpro can cut. SARS-CoV-2 Mpro is able to cleave optineurin (OPTN), a protein coding gene. OPTN is needed to transfer inactivated TANK-binding kinase I (TBK1) to the golgi apparatus. There TBK1 is activated, triggering interferon regulatory factor 3 (IRF3) to action and thus the production of interferon. Mpro can cleave optineurin at two different sites, likely dampening the activity of TBK1 and thus all other signals downstream.

As previously mentioned, Mpro can prevent ubiquitination of RIG-I. This study further outlines this mechanism by clarifying how Mpro cleavage accomplishes this task. Akin to tagging a product for processing, ubiquitination coordinates host proteins for localization, activation and/or deactivation. The team found that Mpro can cleave several ubiquitin ligases which mediate this process. They point out TRIM25 and RIPLET in particular, which mediate the ubiquitination of RIG-I and therefore likely impact interferon production.

The team found that Mpro also cleaves eukaryotic translation initiation factor 4 (EIF4G1), a modulator for human cell growth. The authors posit that cleaving this protein may result in host cell shut-off, as similarly demonstrated for picornavirus.

Last in the list, the authors note that transcription factor STAT2 has been cleaved by Mpro in pig coronaviruses. STAT2 induces interferon-stimulated gene expression. While it is possible that SARS-CoV-2 Mpro cleaves this protein, too, the team could not observe this effect using mass spectroscopy. The cleaved, resultant peptide is too small to be detected with this method.

Alongside identifying cellular substrates for Mpro, the team also conducted a comparative analysis of cleavage sites in SARS-CoV-2 and SARS-CoV-1 in vitro. They uncovered that SARS-CoV-2 Mpro cleaved in far greater amounts than its predecessor. SARS-CoV-2 Mpro had 391 cleavage events as compared to 130 events for its SARS-CoV equivalent. SARS-CoV-2 Mpro could also cleave a wider spread of amino acids at the P2 region, as visualized in the frequency diagram in Figure 4.

FIGURE 4: A frequency diagram of found cleavage specificity sites between (A) SARS-CoV-2 (n=391) and (B) SARS-CoV (n=130). The comparison of cleavage site specificities demonstrates how slight changes in protein structure can significantly impact whether or not a protein can be cleaved.

This finding is surprising because Mpro in both coronaviruses share highly similar amino acid sequences (96% similarity) and catalytic efficiency. One would expect the amount of cleavage events to be comparable. The authors suggest that the three-dimensional shape of the binding sites may be a contributing factor. For example, at residues 45 to 51 SARS-CoV Mpro forms a right handed 310 helical structure. This finding underscores the importance of protein structure and sequences, and how little changes in these areas can cascade to vastly different resultant products.

TABLE 1: SARS-CoV-2 variants of concern and mutations in NSP5, otherwise known as Mpro or main protease.

We note that all omicron variants have mutation P132H. This mutation substitutes an uncharged proline, which would constrict the protein structure, with a positive histidine. The different charge likely results in a major structural change near what appears to be a critical region for SARS-CoV-2 Mpro (see Figure 5). A recent paper found that SARS-CoV-2 Mpro binds with itself, forming a dimer with a C-terminal tail when interacting with NEMO; one of the C terminal tails nestles between 𝜷 strands Gly109-Tyr118 and Ser121-Arg131 in the Mpro neighboring dimer. A mutation near this site could impact Mpro’s ability to cleave NEMO and possibly other host proteins.

We speculate that this change may increase the efficiency of proteolytic cleavage of proteins such as NEMO, thereby improving the ability of the omicron series of viruses to suppress the immune system and accelerate their fitness. We pointed out a similar phenomena in an earlier article in which N protein cleavage facilitates virus replication by innate immune suppression.

Koudelka et al. bring additional specificity and understanding to how Mpro contributes to viral replication. The typical role of Mpro as a cysteine protease is to mature other SARS-CoV-2 proteins and aid processing of translated viral proteins. However, similarly to N protein, it seems Mpro does double duty by also cleaving cellular proteins essential to innate immune signaling. Alongside studies on SARS-CoV-2 spike and nucleocapsid, additional investigation could further elucidate the full scope of Mpro’s immune suppressive qualities, as well as identify whether mutations in Mpro significantly contribute to SARS-CoV-2 viral fitness.

Read the article on Forbes