The Heavy Lifting Of T Cells In Immunocompromised Covid-19 Patients 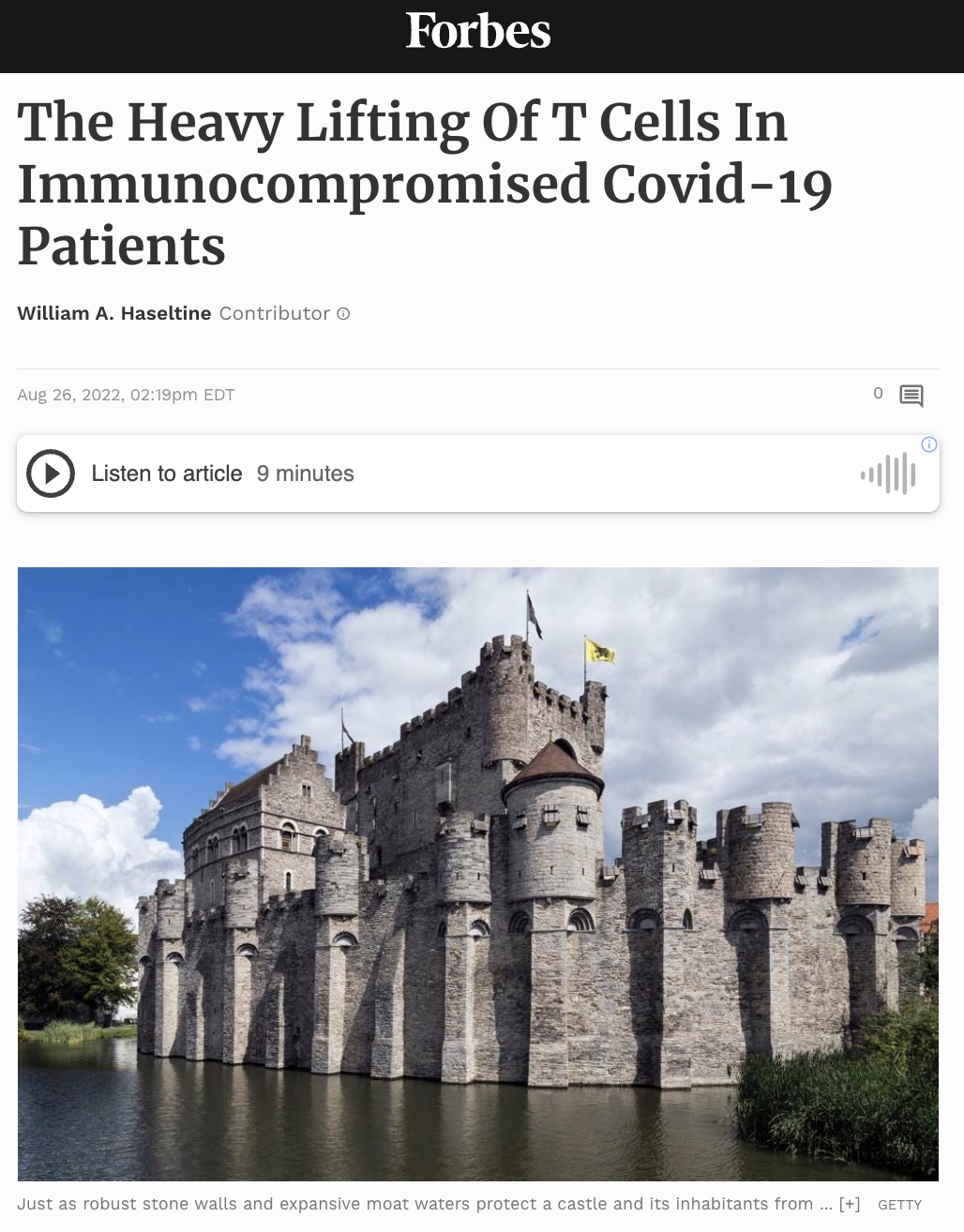 When invaded by a virus such as SARS-CoV-2, the body engages multiple layers of defense to ward off the intruder, just as a moat and various defensive walls serve to protect a castle. The first line of defense is innate immunity, followed by adaptive immunity. Adaptive immunity concerts two separate arms—humoral immunity driven by antibody-producing B cells, and cell-mediated immunity driven by “helper” T cells and “killer” T cells. In healthy people, the collaboration of both branches leads to the recognition and suppression of pathogens and infected cells. Typically some of these protections crumble with age, leaving the body more susceptible to disease. But for certain immunocompromised people, parts of the adaptive immune system may be missing altogether.

A study published in the journal Viruses seeks to understand what happens to T cell responses if the B cell defense of adaptive immunity is severely compromised. In these immunocompromised patients, could T cells alone fend off SARS-CoV-2 infection? The results suggest that T cells make a valiant effort to ward off the serious effects of SARS-CoV-2 infection. Yet, in the absence of B cells, T cells alone may not be enough to surmount the virus.

All about T cells

Helper T cells themselves must be activated to gain function. To activate a CD4+ T cell, a naive T cell must encounter an antigen presenting cell (APC) with its corresponding antigen. The antigen is presented by a class II major histocompatibility complex (MHC-II) molecule. The T cell receptor (TCR) on the naive T cell binds to the antigenic peptide and causes differentiation. The binding process is illustrated in Figure 1.

Figure 1: The T cell differentiation process. An antigen presenting cell (APC) breaks down foreign proteins into smaller fragments within the cell, depicted as yellow rectangular antigens. The smaller peptide, shown as a small yellow circle, is presented by a class II major histocompatibility complex (MHC-II), highlighted in red. The T cell receptor (TCR), illustrated in purple, on the naive T helper cell can then bind to the antigen and stimulate differentiation. WIKIPEDIA Link Added

It is believed that differentiation converts the naive T cell into either an effector T cell or a memory T cell, and thus gains a corresponding function. CD4+ effector T cells accomplish the supportive work done by T cells. Examples of an effector T cell include follicular helper T cells (TFH) which help B cells produce antibodies. CD4+ Memory T cells are more long-lasting and can trigger a recall response that accelerates B cell defense mechanisms to a familiar antigen.

In this study, authors Cords et al. analyzed the frequency and phenotype of CD4+ T cell responses specific to SARS-CoV-2. For this, the team collected and tested peripheral blood mononuclear cells from two Covid-19 patients.

First of the two patients was a 53 year old female with follicular lymphoma, a type of slow growing B cell cancer. This immunocompromised woman received a chemotherapy regimen  and an anti CD20 (B-cell depleting) monoclonal antibody treatment (obinutuzumab) every two months for her cancer. In March 2020, she suffered from severe Covid-19 and was treated with antiviral drug remdesivr and a transfusion of convalescent plasma. SARS-CoV-2 virus was detected in her sputum samples for almost three months. Notably, throughout the entire study this patient had undetectable B cell levels and a generally reduced level of T cells.

The second Covid-19 patient was a 50 year old immunocompetent female. She caught Covid in October 2020, but only had mild symptoms which did not require hospitalization. A polymerase chain reaction (PCR) test confirmed positive Covid-19 status for both women. The researchers monitored CD4+ T cell responses in the first patient over the course of 391 days; in the second, for 159 days.

Through major histocompatibility complex (MHC) staining, the investigators analyzed the frequency of CD4+ T cells which target a specific binding site on the SARS-CoV-2 membrane protein. The team found that the immunocompromised participant had a CD4+ T cell frequency almost 7.5 times greater than that of the immunocompetent patient, as visualized on the right in Figure 3. These elevated levels generally remained stable throughout the entire study. This outcome suggests that T cell immune responses can successfully respond to SARS-CoV-2 specific antigens in the absence of B cells and B cell—T cell interaction.

Figure 3: The frequencies of Tetramer+ CD4+ T cells in the peripheral blood of the index patient (red) and the reference patient (blue), depicted longitudinally (left) and pooled for each patient (right). The graphic clearly illustrates the higher and more sustained CD4+ T levels observed in the immunocompromised patient. This patient had a mean of 0.163% and a range between 00.447-0.453%. CORDS ET AL

The frequency of specific T cells differed between the two patients. For example, the investigators observed a reduced frequency of circulating T follicular helper cells (cTFH) in the immunocompromised patient (4.72% versus 21.5%). Follicular T helper cells typically collaborate with B cells to produce antibodies. Given this, the anti CD20 immunotherapy may  have impaired the differentiation pathway of circulating T follicular helper cells as a result of the lack of B cells to interact with. So, although T cell responses were plentiful in the B cell depleted participant, the absence of B cells seems to have impacted what kind of T cells circulate the peripheral blood.

The team noticed a difference in the expression of IL-7 receptors (CD127+), which are often used as markers for long-lived memory T cells. Both patients had reduced proportions of memory T cells while they displayed symptoms. This frequency increased to bulk CD4+ T cell levels when the immunocompetent patient spontaneously cleared the infection; in comparison, the immunocompromised patient saw a similar increase only after receiving remdesivir and a plasma transfusion. The inverse of this relationship is illustrated in Figure 4, with the percentage of CD127- T cells—instead of CD127+ T cells—displayed for the reference patient (in blue) and for the index patient (in red). Figure 4 demonstrates how the increase of CD127+, thus the decrease in CD127- T cells, occurs faster in the immunocompetent participant.

This delayed contraction of effector cells seemed largely influenced by therapeutics. As the authors posit, there could be a specific T cell memory at play which can only maintain homeostasis in immunocompromised patients; here, T cell constructed homeostasis appears to keep SARS-CoV-2 replication at bay, but cannot do more without additional help. This could explain why the SARS-CoV-2 infection was so prolonged in the immunocompromised patient until the implementation of antivirals.

Cords et al. provide a valuable addition to current understandings of cell-mediated immune responses to Covid-19 in the absence of B cells, which helper T cells usually support. The study has clear implications for people with cancer, chronic inflammatory diseases or an organ transplant—people who may have a compromised antibody system. Beyond this scope, the results remain relevant due to decreasing humoral response seen in typical Covid-19 protections: natural infection and vaccines.

Previous studies have shown that antibody protection attained through natural infection and vaccines wanes within the span of a few months. Additionally, the SARS-CoV-2 virus appears adept at changing the conformation of its spike protein—the binding site which current vaccines target—and thereby dodging antibody recognition. Despite antibody responses dwindling rapidly, vaccines and natural infection remain highly efficacious in preventing severe disease and death. This remarkable ability to protect against hospitalization appears to rely upon cell-mediated immune responses rather than humoral responses.

In this study, the authors found that B cell depletion caused by anti CD20 immunotherapy did not encourage viral replication, and that cell-mediated responses can be activated without B cells present. The lack of a humoral response, however, may have altered the kind of T cell response seen. Most importantly, the delayed contraction of effector T cells suggest that helper T cells must be integral to suppressing SARS-CoV-2, but alone cannot overcome the illness without therapeutic intervention. Although more investigation with a wider cohort is needed, it would appear that cell-mediated immunity can indeed provide protection against viruses without B cells—just not enough to surpass the illness.