There May Be A New Polio Epidemic On Its Way- If So, What We Can Do: Part II 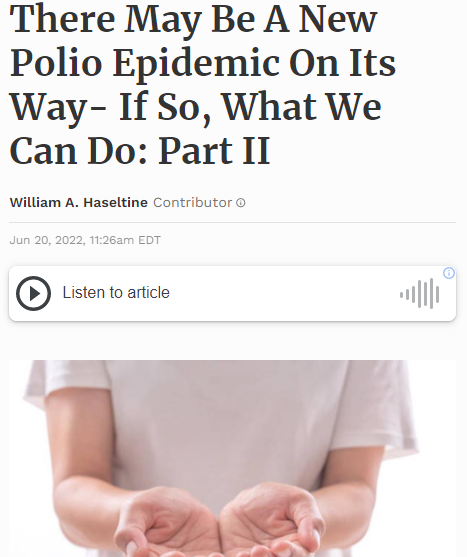 This is Part II in a series on the enteroviruses that appear to cause a polio-like neurological disease, Acute Flaccid Myelitis. The US still has no vaccine against the primary causative agent while China has three, with more in Asia on the way.

As case reports rise, Acute Flaccid Myelitis (AFM) is a growing concern in the United States, heightened by the fact that we have yet to develop any vaccines or specifically targeted antiviral medications. Caused by an enterovirus in the poliovirus family, this neurological condition often results in weakening of the muscles and paralysis. However, the lack of success in vaccine production exhibited in the US is not mirrored in other parts of the world. In Asia, there are currently four vaccines in late stage clinical trials. These vaccines protect against EV-A71, an enterovirus very similar to EV-D68, the main culprit of Acute Flaccid Myelitis in the US.

Three of these vaccines are currently licensed for use in children in China, and a fourth targeting a different subgenotype performed very well in a phase 3 clinical trial in Taiwan and Vietnam. Successful prevention of this enterovirus across the world is very hopeful for our prevention efforts here in the United States. Polio, caused by an enterovirus in the same family, has shown us that prevention and eradication is possible. Hopefully we will be able to replicate the successful development of vaccines in Asia in the United States very soon.

EV-A71 infections often manifest as hand, foot, and mouth disease (HFMD), primarily in children. Symptoms generally consist of fever, mouth sores, and a rash found on hands, feet, and/or the mouth. Infections are often mild and many clear up within a week. However, some infections of EV-A71 have more serious neurological complications such as meningitis or Acute Flaccid Myelitis, leading to potential paralysis or loss of life.

Over the past 25 years, the Asia-Pacific region has experienced cyclical outbreaks of EV-A71, some leading to hundreds or even thousands of deaths, mostly in infants and children. Therefore, access to effective vaccines is essential. The three vaccines currently authorized for use in China are inactivated whole virus C4 subgenotype-based vaccines and are manufactured by Beijing Vigoo Biological, Chinese Academy of Medical Sciences, and Sinovac Biotech in China, all three of which are based in Beijing. In phase 3 trials, a two-dose series showed high efficacy rates (90.0% – 97.4%) in children aged 6 – 35 months.

While the vaccines have shown cross-reaction against genotypes other than C4, there is no hard efficacy data with other strains. The fourth vaccine, EV71vac, is based on the B4 genotype and included participants as young as two months old in the phase 2 clinical trial. This is valuable because the 2 – 5 month age group carries the highest risk of case severity and fatality, and the three Chinese vaccines are not authorized for use in infants of this age.

This inactivated aluminum phosphate-adjuvanted B4 sub-genotype based vaccine has shown promising results thus far, with no adverse events in clinical trial phases 1 and 2. Published April 2022 by Dr. Nguyen and collaborators in The Lancet, the results of a double-blind, placebo-controlled phase 3 clinical trial demonstrate a 96.8% efficacy rate. Of the 1,426 total participants that received two doses of EV71vac, there were zero reports of hand, foot, and mouth disease (HFMD). In the placebo group of 1,483, there were 22 cases of both laboratory and clinically confirmed HFMD. Furthermore, seroprotection rates were close to 100% at all time points monitored after the second vaccination, up to 10 months after the second dose.

Although EV71vac was based on B4, a different subgenotype than the Chinese vaccines which were based on C4, the vaccine still showed both in-vitro and real-world cross-protective efficacy against B4, B5, and C4 subgenotypes. The safety data and impressive efficacy rates in infants carry great potential in preventing severe disease and mortality amongst the most vulnerable population. Pending approval in Vietnam and Taiwan of the recently submitted results of the phase 3 clinical trial, EV71vac will be ready for wide distribution, adding to the arsenal of protection against diseases associated with enterovirus A71 like Acute Flaccid Myelitis.

The success of vaccine development in Asia lends hope to the fight against the growing concern of non-polio enteroviruses. However, with zero vaccines in the United States against EV-D68, the primary cause of Acute Flaccid Myelitis in the country, our work is clearly cut out for us. Coronaviruses have taught us a lesson of the potential for an often insignificant viral infection to quickly turn catastrophic. Coronaviruses cause colds around the world, just as many enteroviruses cause mainly mild symptoms, without threat of serious illness. However, as Covid-19 has shown us, there are new and dangerous strains within the coronavirus family. The same is true for enteroviruses. While most are common and relatively mild, there is the potential for some to be much deadlier, just as was polio.