There May Be A New Polio Epidemic On Its Way- If So, What We Can Do 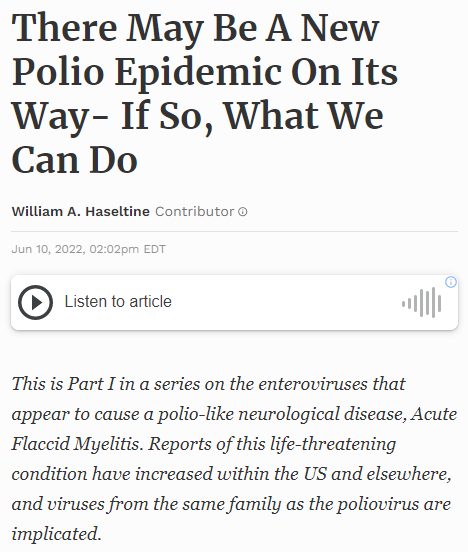 This is Part I in a series on the enteroviruses that appear to cause a polio-like neurological disease, Acute Flaccid Myelitis. Reports of this life-threatening condition have increased within the US and elsewhere, and viruses from the same family as the poliovirus are implicated.

Child in Wheelchair Pushed by Another Child GETTY IMAGES

Most people have either lived through or heard horror stories of polio, a severe disease caused by the poliovirus which can cause paralysis or even death through infection of the spinal cord. Thanks to vaccines, the United States has been polio-free since 1979. However, there are other lesser known viruses that can cause similar life-threatening neurological conditions. Acute Flaccid Myelitis is one of these conditions, and there have been increased reports of cases in the US in the past 10 years.

Acute Flaccid Myelitis (AFM) affects the nervous system, specifically the area of the spinal cord referred to as gray matter, and results in a weakening of the body’s muscles and reflexes. In serious cases this can lead to respiratory failure, as the patient’s muscles required for breathing are too weak and lifesaving mechanical support is required. Up to 90% of cases of AFM are seen in children, and there is no specific treatment or cure.

Magnetic Resonance Imaging (MRI) of the Spinal Cord in a Case of AFM. Visible swelling is apparent in (D) when compared to (E) where the swelling has resolved. ESPOSITO ET AL., 2017

As reported by the CDC, there have been sharp spikes in the number of cases of AFM in the years 2014, 2016, and 2018. It is unclear how the Covid-19 pandemic may have impacted diagnosis and reporting of AFM in the previous few years, potentially explaining why the trend of uptick in cases is not observed after 2018. The observed increase every other year may suggest that immunity from natural infection only lasts one year, or there may be some other underlying cause for this new pattern of alternating increase in case rates. Within each year, the number of cases in the US are concentrated during the months between August and November, which is the same time of year that many viruses circulate. This includes enteroviruses, which are thought to be the culprit behind Acute Flaccid Myelitis.

Enteroviruses are a genus of positive-sense single-stranded RNA viruses characterized by their transmission route through the intestines. They usually occur in the gastrointestinal tract, sometimes spreading to the central nervous system. Poliovirus is one of the many enteroviruses, and there are other non-polioviruses within the genus that are hypothesized to cause AFM. More than 90% of patients who developed AFM had mild respiratory symptoms or a fever consistent with viral infection prior. The most common initial symptoms of AFM are sudden onset of arm or leg weakness, loss of muscle tone, and loss of reflexes. Some will have drooping of eyelids or facial muscles, difficulty swallowing and slurred speech, and pains in arms, legs, neck, or back.

In some patients with diagnosed Acute Flaccid Myelitis, coxsackievirus A16, EV-A71, and EV-D68 have been detected in the spinal fluid. These are all types of enteroviruses, and it is likely that there are multiple capable of causing AFM. Additionally, the stool samples of patients with AFM tested negative for poliovirus, so this is confirmed not to be polio. Sometimes, no pathogen is detected in the spinal fluid of patients with AFM. Some possible explanations behind this may be that the body has already cleared the pathogen or that the pathogen is hiding in tissues, making detection difficult. It is also possible that a now-cleared pathogen triggered an immune response which then caused damage to the spinal cord.

Life Cycle and Genome of EV-D68. The mature EV-D68 virion attaches to the plasma membrane of the host cell and then undergoes receptor-mediated endocytosis. The capsid then undergoes uncoating allowing viral (+)-ssRNA to enter the cytoplasm. Next, the viral genome is translated into a polypeptide that undergoes further proteolytic processing to generate structural and nonstructural proteins. In addition, (−)-ssRNA is generated by RNA replication, which occurs on replication organelles. These RNAs become the template for new copies of the (+)-RNA genome. Virions assemble from structural proteins and VPg-linked RNA. These immature viral particles are largely taken up by autophagosomes, within which the acidic environment stimulates maturation of the capsid. Mature virions are released either by exocytosis of these autophagic vesicles or by cell lysis and release of nonenveloped viral particles. ELRICK, PEKOSZ AND DUGGAL, 2021

Recently, enterovirus D68 (EV-D68) has been targeted as the likely primary cause for AFM. This suspicion was just recently confirmed by researchers who published a case report in the New England Journal of Medicine in May 2022. They provided evidence that EV-D68 RNA and protein were found in the spinal cord of preserved tissue from the autopsy of a child who died of AFM. First identified in California in 1962, EV-D68 is primarily transmitted as a respiratory infection and often causes only mild respiratory illness. It is suspected to be spread when an infected person coughs, sneezes, or touches a common surface in the close proximity of another person. There are no symptoms specific to EV-D68, and most people infected with it will never know unless it progresses to AFM.

Hypothesized Mechanisms of Neuroinvasion of EV-D68ELRICK, PEKOSZ AND DUGGAL, 2021

There is currently no specific vaccine or treatment of EV-D68 or AFM, but the best strategy likely consists of a multifaceted approach focused both on anti-viral and anti-inflammatory strategies. Dr. Vogt at the University of North Carolina School of Medicine who published the evidence confirming that EV-D68 causes AFM suggests that there needs to be a balance between limiting the immune-mediated damage without restricting the immune system so much that the virus is able to thrive.

Despite the lack of controlled clinical trials, immunoglobulin therapy (IGIV) has been used as treatment for EV-D68 infection and mitigation of the progression of AFM. It has been observed to produce high levels of neutralizing antibodies against EV-D68, as well as anti-inflammatory effects which may aid in the management of AFM. Monoclonal antibodies are a potential future treatment, and there is a push for rapid development of a vaccine. In the next piece in this series, we will discuss the production of vaccines in Asia for EV-A71, a similar enterovirus also capable of causing Acute Flaccid Myelitis.