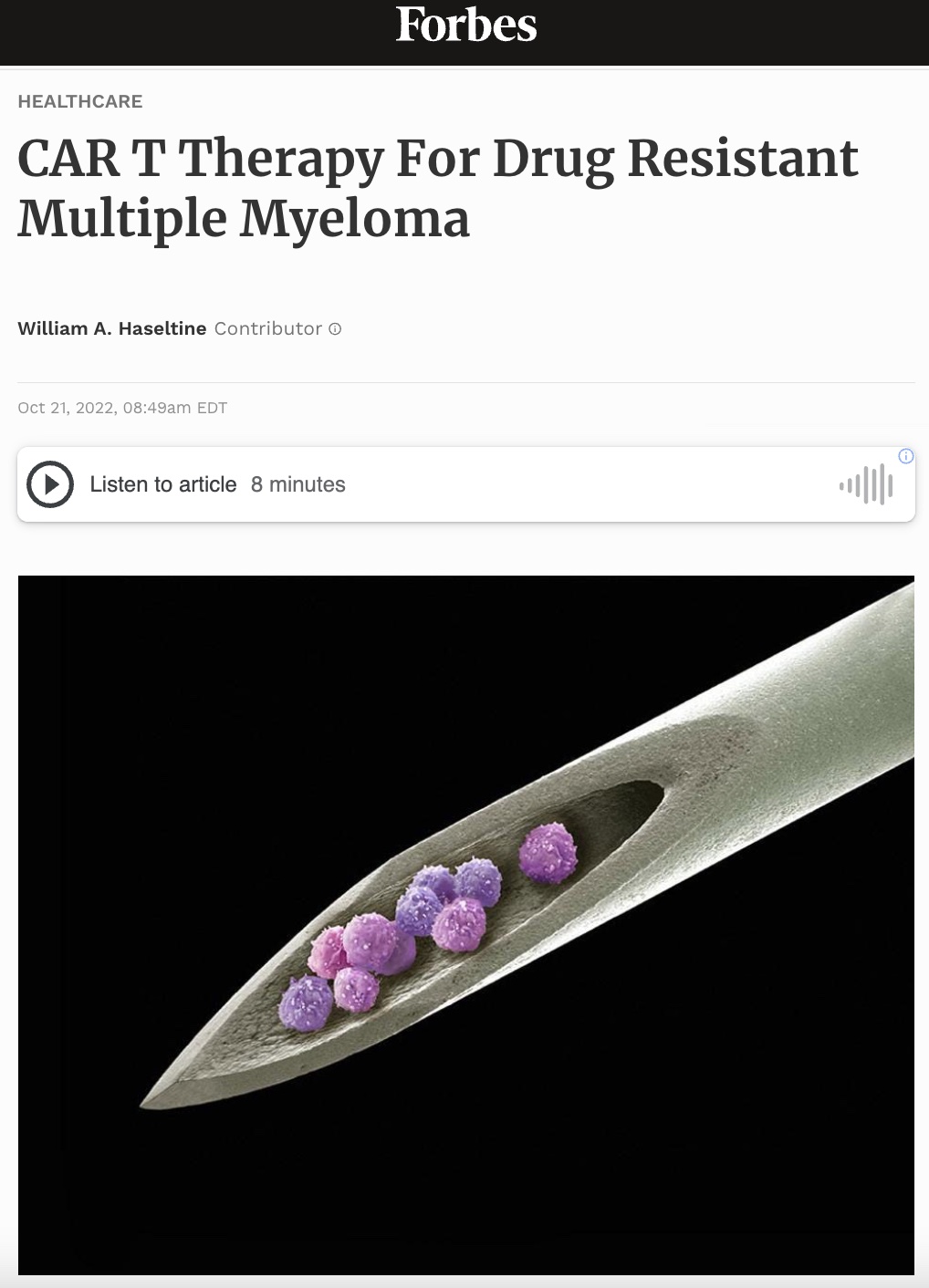 This is the third installment in a series on the advances CAR T, a remarkable immunotherapy treatment dubbed a “living drug.” The first in the series lays the foundation for understanding how CAR T works, while the second outlines its uses for B cell cancers. This third installment highlights recent advances in treating multiple myeloma.

Multiple myeloma is a relatively uncommon yet serious disease estimated to impact more than 30,000 US citizens this year. Although several treatment options exist, the illness is considered incurable as most treatments do not resolve the condition permanently—including the most recent advancements with CAR T cells. Here, we describe an approach using a different variant of CAR T cells for multiple myeloma that holds promise for those with treatment-resistant forms of the disease.

What is Multiple Myeloma?

Multiple myeloma (MM) or myeloma is a cancer of the plasma B cells found in the bone marrow. Although these white blood cells typically produce antibodies, for people with multiple myeloma, the plasma cells multiply faster than the body can handle, produce abnormal antibodies, and set the body out of balance. The illness can spread to other organs through the bloodstream, and masses of plasma cells may form in the bone marrow or soft tissues, as well.

The illness usually occurs to people 60 years and older, and is unlikely to develop in individuals under 40 years of age. The symptoms can be widely varying—some even report having no symptoms at all—but most with this disease experience bone pain and fatigue. Other common complications include anemia, kidney problems, or thickened blood.

Without treatment, the prognosis is poor. However, with the advent of chemotherapy and more advanced medicines, survival is usually four to five years. If diagnosed early, the five-year survival rate exceeds 77%.

Patients with active myeloma first receive a combination of drugs to target the abnormal cells. Another alternative is chemotherapy. For example, I contributed to the creation of Velcade, a chemotherapy medicine which slows or stops the growth of myeloma cells. Stem cell transplants, steroids and even CAR T therapy—a newer medical technology which alters patient cells in the lab and infuses them back into the body to fight the cancer—may be tried as other potential options. Unfortunately, once a therapy fails, the body typically becomes resistant to its reintroduction and thus loses efficacy.

CAR T therapy has recently been approved to treat multiple myeloma, but it is only considered after four or more refractory lines of treatment—in other words, when other four or more options fail to achieve lasting remission. The two existing CAR T therapies on the market target B cell maturation antigen (BCMA), an antigen expressed on the surface of malignant plasma cells; in this piece, the antigen will be referred to as Target 1.

A Chimeric Antigen Receptor T cell derives its name from the synthetic combination of T cell and antibody properties. Patient T cells are taken from the body and modified to detect Target 1 through an antibody-based fusion receptor (scFv). The lysing process relies on signaling from the T cell. As seen in Figure 1, when the CAR T antigen receptor binds with Target 1 on the cancer cell, the CAR T cell releases chemicals to trigger the cancer cell’s death.

Clinical trials have confirmed these CAR T therapies as safe to use and capable of producing results. A study of Ide-cel found 73% of participants had a decrease in their cancer. Even more successfully, a study of Cilta-cel saw a 98% response rate, with 78% of patients showing no signs of cancer in their bone marrow. The outstanding issue with both treatments, however, is that relapse does eventually occur—around 8.8 months later for Ide-cel, and 22 months later with Cilta-cel.

With relapse and treatment resistance a prevailing concern for multiple myeloma treatments—not just CAR T—researchers are seeking new ways to sustain longer remission and increase survivability when other alternatives are exhausted.  One possible method is to enhance current CAR T protocols with a new therapeutic target.

In their study, Mailankody et al. consider the safety of an alternative antigen target. The target is known as G protein-coupled receptor, class C, group 5, member D (GPRC5D), but shall be referred to as Target 2 for simplicity. Despite its unknown function in tissues, it poses as a promising CAR T antigen target due to its presence in several myeloma cell lines and in bone marrow plasma cells.

As depicted in Figure 3, the researchers first collected patient T cells through leukapheresis. They modified the T cells, expanded them to large numbers, and then infused the CAR T cells back into the body after completing preparatory chemotherapy. The patients received an escalating dose of the trial CAR T infusion, totalling to four doses.

On the whole, this study successfully confirms Target 2 CAR T therapy as safe and effective, particularly for individuals who have already received Target 1 CAR T cell therapy or have run through several other therapeutic options. Around 78% of patients had a partial response or better, and 59% had a very good partial response or better. The therapy was effective even ten months after infusion for some individuals.

Mailankody et al. demonstrate that Target 2 CAR T therapy can effectively treat multiple myeloma. If Target 1 CAR T therapy fails, Target 2 appears to be a viable alternative. The results also suggest that using Target 1 and Target 2 CAR T therapies in succession could lead to positive outcomes. A third alternative is to enhance the T cell design further to allow for tandem targeting; an ideal synergy could be attained if T cells were fitted with both Target 1 and Target 2 receptors, hopefully resulting in longer remission periods and increased survival.