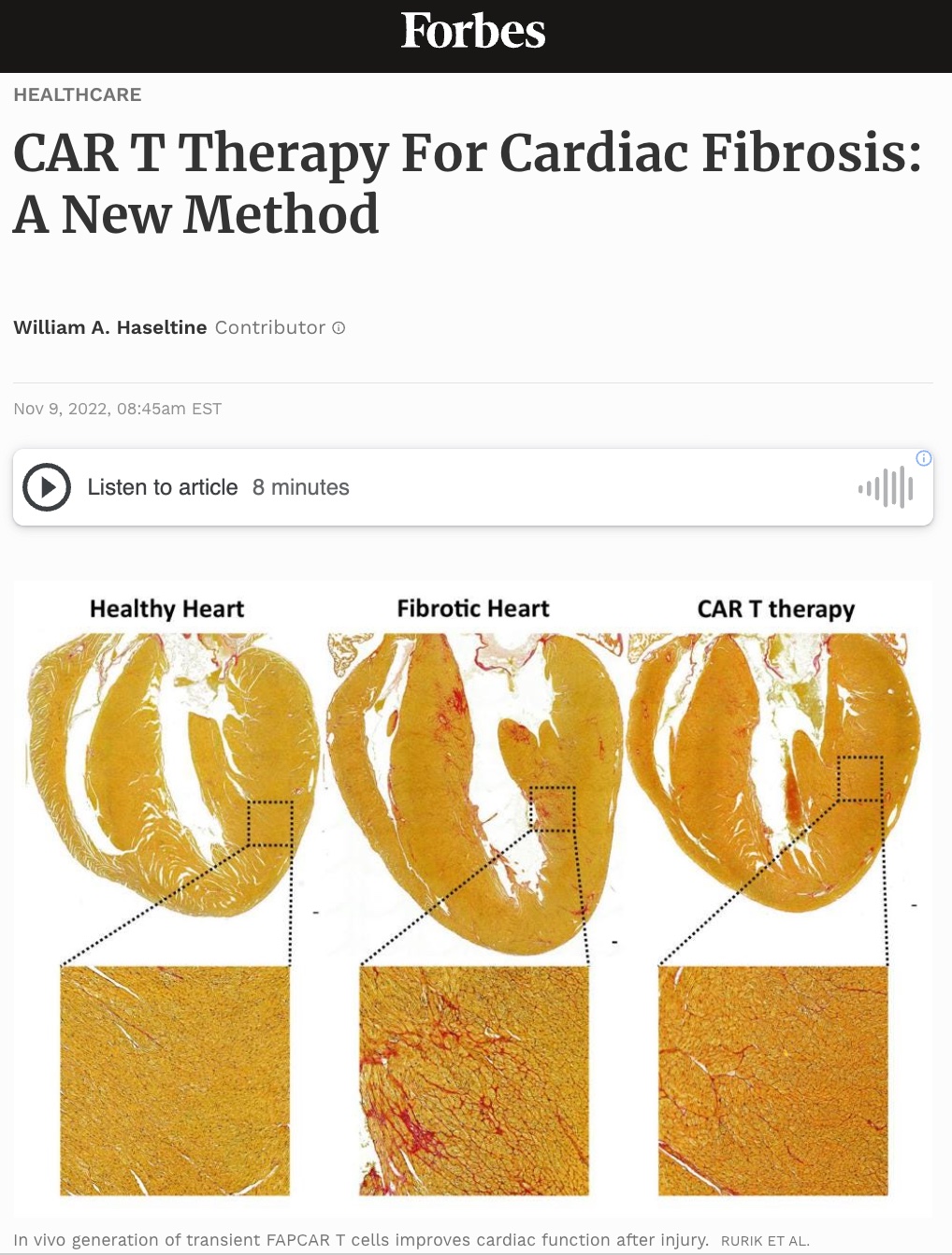 This story in the CAR T series delves into recent adaptations to treat the heart. Earlier installments cover the fundamentals of CAR T, as well as its applications for B cell cancers, multiple myeloma and lupus.

CAR T therapy, a “living drug,” traditionally involves isolation and purification of T cells outside the body. The cells are then modified with a synthetic receptor and then re-infused into the body for treatment of cancers. Researchers have now successfully demonstrated that T cells can be modified in vivo by mRNA technology, bypassing the need for extraction, chemotherapy and re-infusion. Although this method proves effective in treating mice with scarred hearts, considering fibrosis contributes to over 800,000 deaths worldwide, the study contains great potential for human treatment.

The heart, flexible yet strong, circulates blood through the body by pumping blood through its chambers. Aging and injury tamper with this function, creating scarred and thickened tissue called fibrosis. Although fibrosis occurs normally when healing, a highly fibrotic heart loses its elasticity; the stiffened tissues and interrupted electrical signaling prevent proper contractions of the heart (see Figure 1). Cardiac fibrosis is highly associated with heart disease and heart failure.

Cardiac fibrosis has no “cure-all” treatment. Early detection improves prognosis, but options dwindle as damage progresses irreversibly. People with advanced cardiac fibrosis may take drugs which antagonize overstimulation of the heart or might even require heart valve replacement. 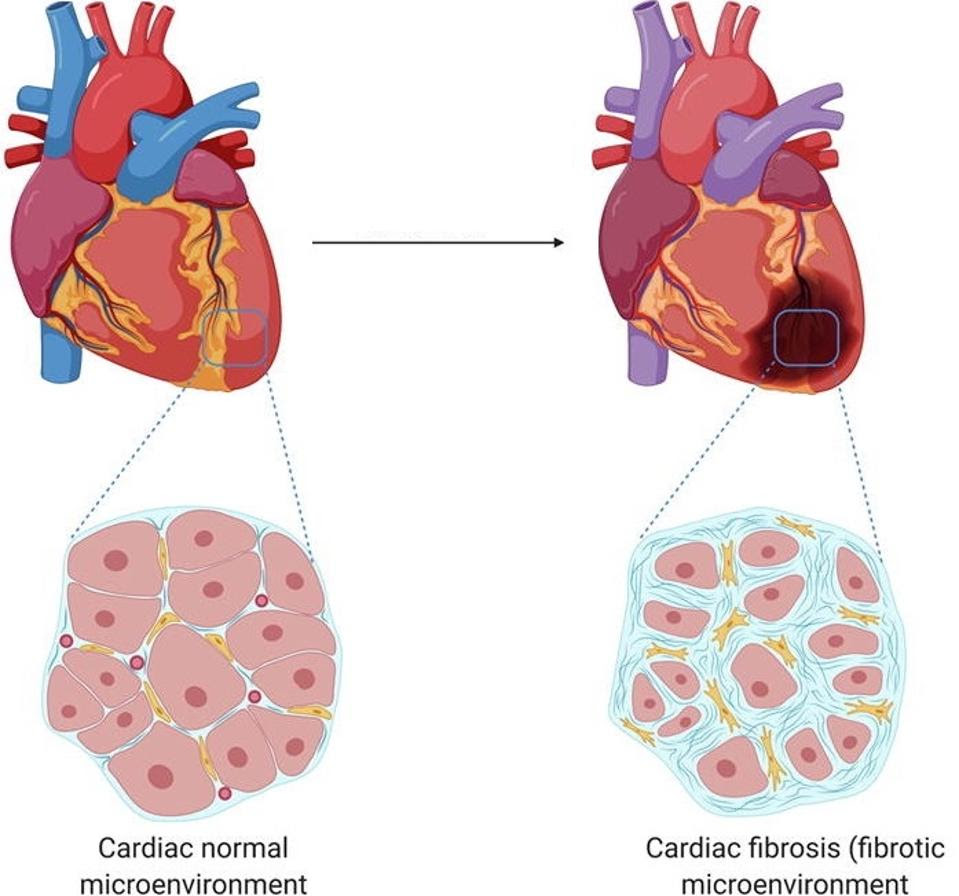 FIGURE 1: Comparison of the cells in a healthy heart and the cells seen in cases of cardiac fibrosis. Note the thickened extracellular matrix, which impedes on normal heart function in several ways.

In their study, Rurik et al. explore a new method to directly counter cardiac fibrosis. This method builds upon the basics of CAR T: the use of T cells with a synthetically engineered receptor to target and kill specific cells.

CAR T is approved to treat people with certain lymphomas, leukemias, and multiple myeloma. Figure 2 illustrates this process. In these cases, the desired T cells are extracted from the patient’s body. Synthetic mRNA is inserted into the cell with a retrovirus, a virus commonly used in gene therapy to permanently change other cells’ genomes. The altered and expanded cells are then infused back into the body after preparatory chemotherapy. These T cells target either CD19 or BCMA, two antigens found on malignant B cells. 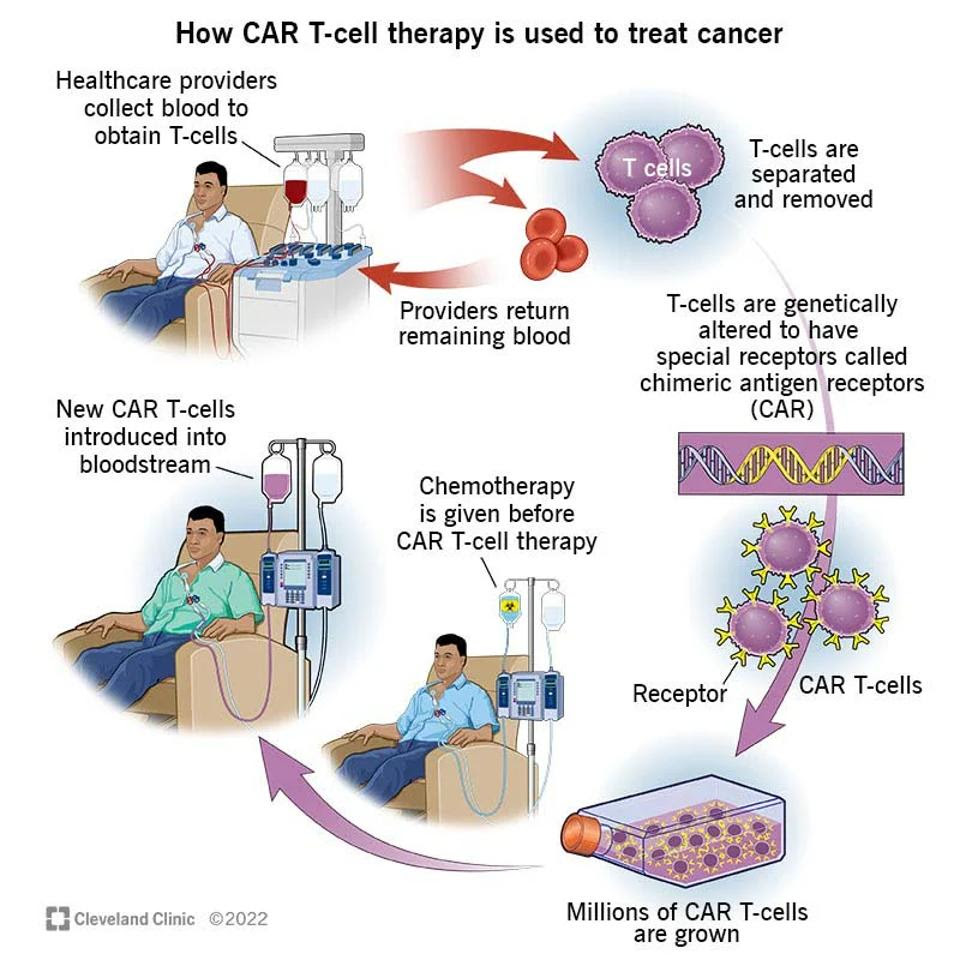 FIGURE 2: The CAR T process has several steps. T cells must be extracted from the blood, then genetically modified with a new receptor and expanded to great numbers. The patient prepares with chemotherapy before the CAR T cells are introduced into the bloodstream.

The benefit of inserting genetic information with a retrovirus lies in its permenance. The CAR T cells can expand and persist in the body for a long time after infusion, continually fighting the cancerous cells they encounter. However, this is of no benefit to researchers hoping to fight cardiac fibrosis. If T cells continuously target fibrotic cells, they would impair normal healing processes and potentially induce autoimmunity. Rurik et al. employ an elegant solution which shortens the CAR T cells’ active duty, thereby circumventing the extraction process altogether.

The team adapted mRNA delivery technology seen in current COVID-19 vaccines and applied it to basic Chimeric Antigen Receptor design. The mRNA does not integrate into the T cell genome, allowing for temporary transcription of the mRNA and transient expression of the new receptor.

The authors adopted a strategy to introduce the chimeric receptor to T cells in the body rather than extracting and purifying them outside the body. To accomplish this aim, they first synthesized mRNA that encodes a receptor against fibroblast activation protein (FAP), a protein expressed on activated fibroblasts responsible for fibrosis. They purified the mRNA and packaged the engineered mRNA into standard lipid nanoparticles (LNP). 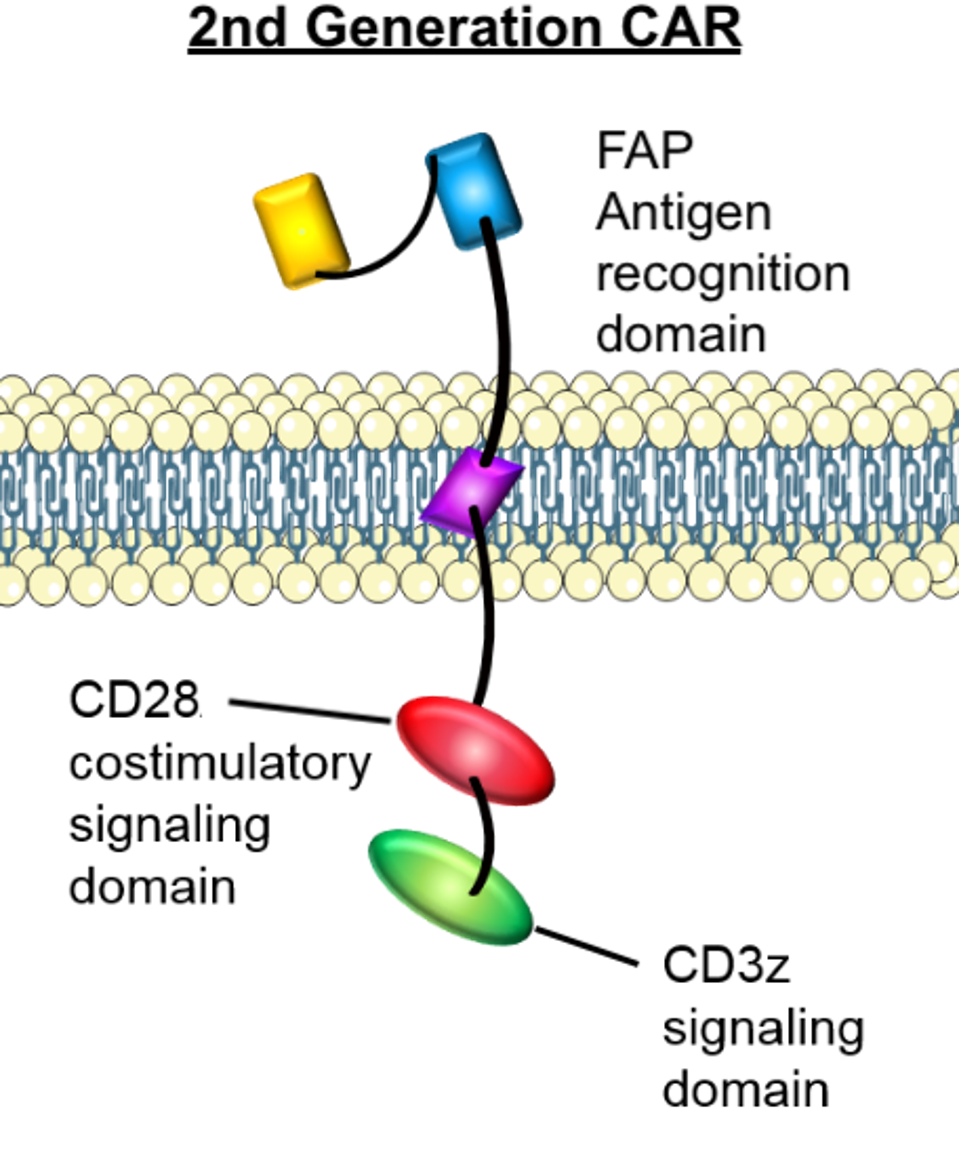 FIGURE 3: The mRNA encoded for a chimeric antigen receptor composed of a fibroblast activation protein (FAP) antigen recognition domain and a CD28 and CD3z signaling domain in the cytoplasm. The team also included an additional peptide to prevent immune suppression.

The team found that lipid nanoparticles could successfully deliver the mRNA package to T cells, as seen in Figure 4. The killer T cell absorbs the lipid nanoparticle by endocytosis. The lipid particle then degrades and the synthetic mRNA releases into the cell. Finally, the cellular machinery reads the genetic instruction and briefly produces the receptor against fibroblast activation protein. This is possible with both animal and human T cell cultures.

FIGURE 4: To create a CAR T cell with transient CAR expression, a lipid nanoparticle (LNP) with the desired genomic information is absorbed by the T cells through endocytosis. Once inside the T cell, the lipid nanoparticle degrades and releases the mRNA which encodes for the desired receptor. The expressed receptor allows the T cell to detect fibroblast activation protein located on the surface of many activated fibroblasts.

Unlike traditional CAR T cells that carry a chimeric receptor encoded by DNA inserted into the genome, these CD5+ T cells carry mRNA only transiently. The mRNA is not integrated into the cell’s genome and remains stuck in the T cell cytoplasm before degrading. This is ideal; fibroblast activation protein receptors must be expressed briefly as longer expression may harm other tissues.

The research team assessed the efficacy of the CAR T cells in different conditions. When they treated the cells in tissue culture, more than 80% of T cells expressed the chimeric antigen receptor and could effectively kill target cells with fibroblast activation protein.

The team then tested this model on mice with cardiac fibrosis. The mice received medication to injure the heart and induce scarring. After one week, the team administered the lipid-mRNA injection. Consistent CAR expression was noted 48 hours after injection, and disappeared after one week.

The results were impressive. The function of the heart’s largest chamber improved, in some cases returning to uninjured levels. Similarly, the amount of blood filling the heart normalized to safe volumes. The therapy notably reduced the thickness of the heart. Finally, although the mass of the largest chamber did not normalize, it trended towards improvement.

One caveat in lipid-CAR T cell delivery is that some cells, perivascular fibroblasts, do not express fibroblast activation protein. In consequence, these cells were not impacted by CAR T cells and some fibrosis persisted. No overly toxic side effects were noted.

A key observation of effective CAR T therapy is the ability of the modified T cells to take small bites of the target cell—a phenomenon known as trogocytosis. Deriving “trogo” from the Greek word “to bite,” trogocytosis entails one cell nibbling another and, in the process, transferring the surface molecules from one to the other. The researchers found evidence of CAR T cells “nibbling” the activated fibroblasts and retaining the stolen antigens (illustrated in Figure 5), suggesting that the T cells successfully adopted the chimeric antigen receptors in vivo. 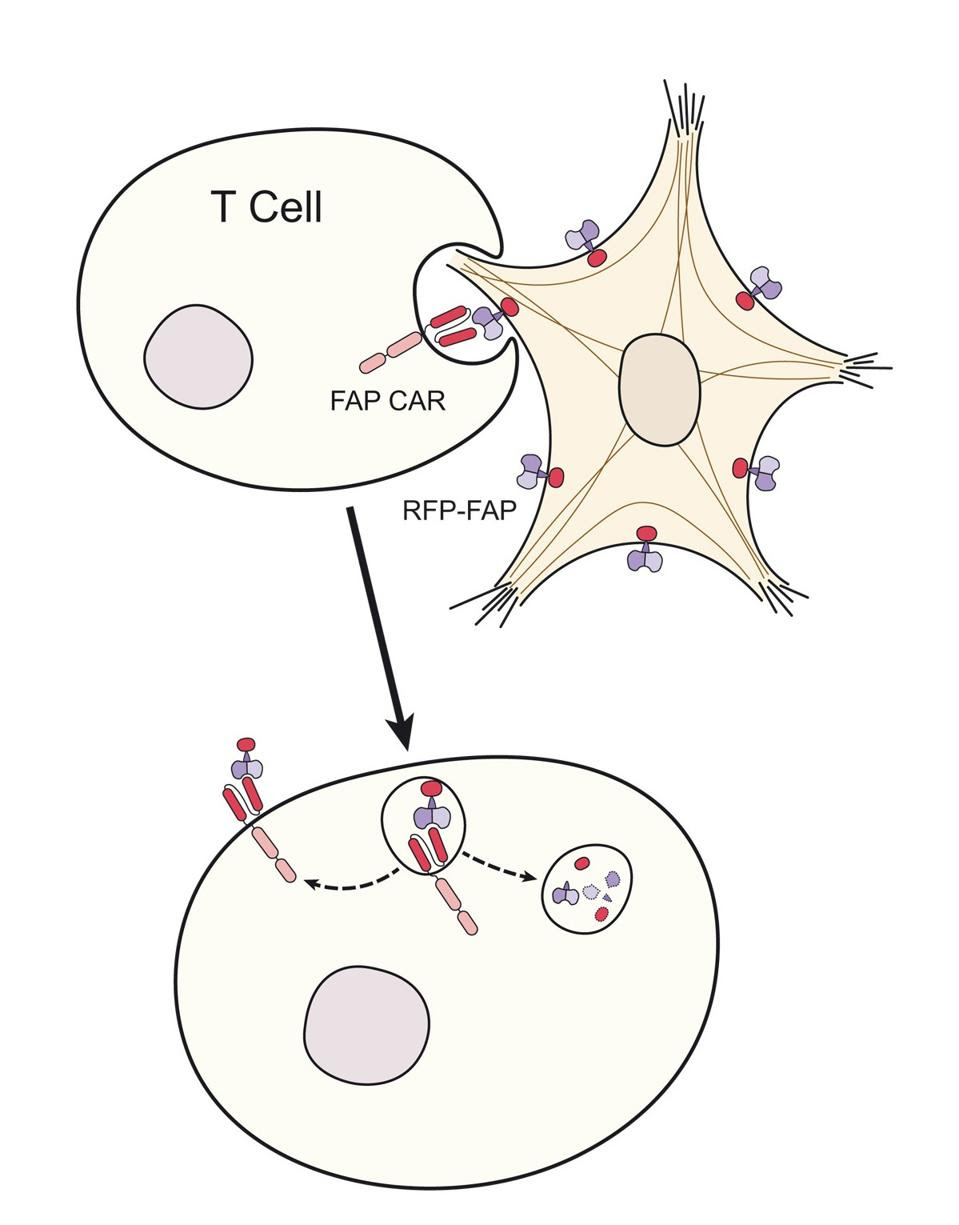 FIGURE 5: Trogocytosis occurs when a cell ingests small “bites” of another cell, thus taking the surface molecules from one cell and expressing them on its own cell surface. Here, the T cell detects the activated fibroblast, ingests parts of its surface, and then expresses the ingested surface molecules.

CAR T therapy revolutionized cancer treatment with its efficacy and innovation. Combining mRNA technology to this therapy creates a temporary version of this “living drug” that does not sacrifice on quality. The therapy is well tailored to heal mice with damaged and scarred hearts, and widens the possibilities to treat other non-cancerous human ailments. If translated to clinical settings, transient CAR T therapy may be less expensive and more readily available than its traditional counterpart.