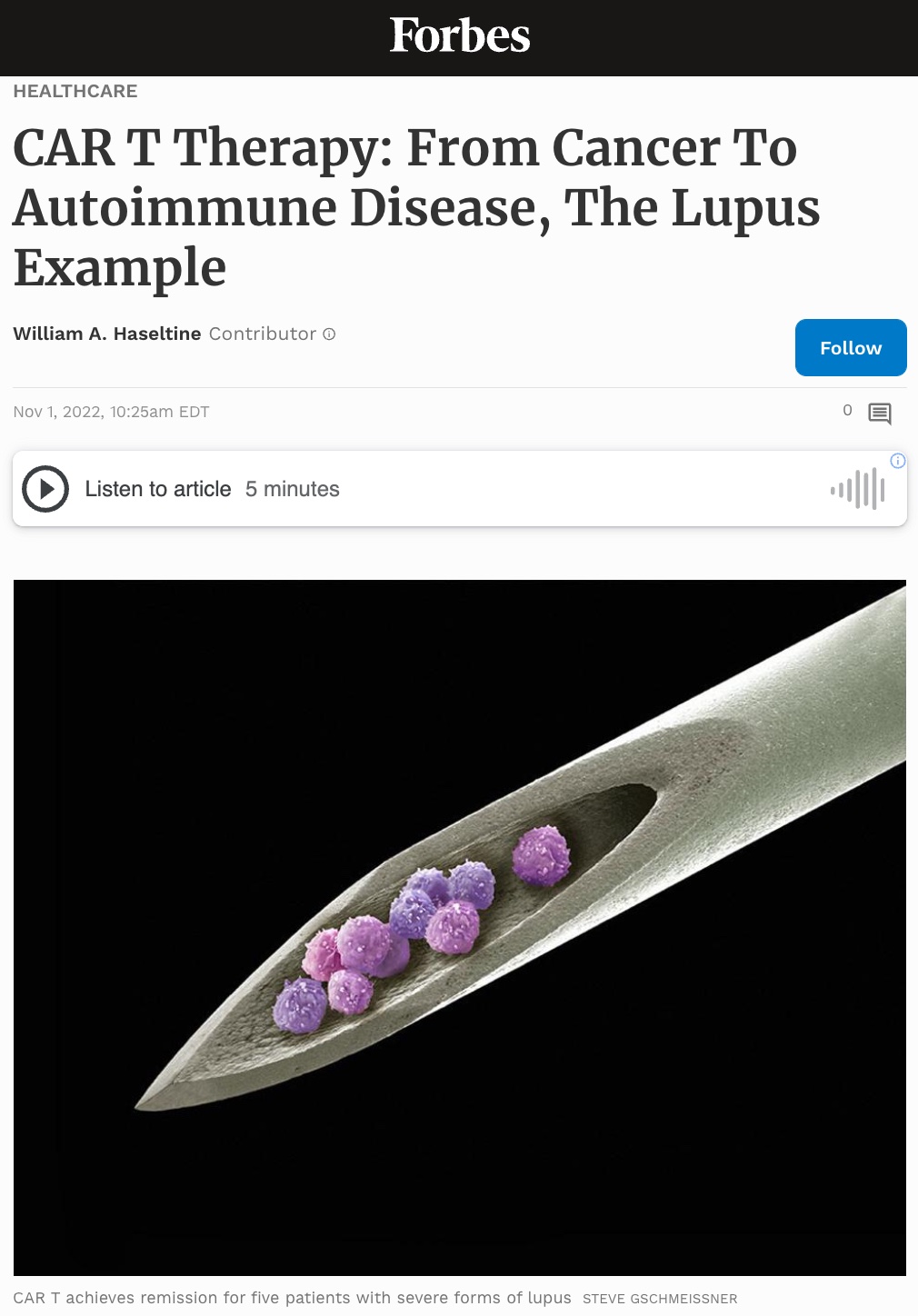 This is the fourth installment in a series on the advances CAR T, a remarkable immunotherapy treatment dubbed a “living drug.” Here we draw attention to promising findings for CAR T lupus treatment. The foundations of CAR T as well as applications for B cell cancers and multiple myeloma can be found in earlier works in the series.

The previous installments in this series have focused on CAR T therapy as a cancer treatment. A recent study published in the journal Nature Medicine highlights the potential of CAR T therapy beyond this realm—specifically for lupus and other autoimmune diseases.

Lupus (systemic lupus erythematosus) is an autoimmune disease that affects women approximately ten more than men, and is characterized by the overproduction of antibodies that attack the body’s own tissues. Lupus symptoms—ranging from mild to life-threatening—often come and go, making the condition hard to diagnose. Characteristic signs such as fatigue, muscle pains, joint pains and fever also coincide with symptoms of other diseases.

Although lupus has no cure, modern day symptomatic treatments ensure a normal life expectancy for 80-90% of people with lupus. One of our successes at Human Genome Sciences, a company I founded and served as Chair and CEO, was the use of genomics to discover and bring to market the first drug to treat lupus: Benlysta. Although the medicine proved to be effective, for some with lupus even the strongest drugs offer no relief.

In their study, Mackensen et al. test the effectiveness of CAR T therapy for treatment-resistant forms of lupus. The theory derives itself from CAR T cells’ ability to kill cells. In lupus, B cells produce antibodies that attack the body and trigger inflammation (Figure 2). Using CAR T therapy, the researchers aimed to purge the B cell lineage, allowing the body to restore B cells de novo.

To do this, the researchers first collected patients’ white blood cells. The patients then underwent lymphodepletion, the use of chemotherapy drugs (i.e. fludarabine and cyclophosphamide) to preferentially kill B cells. As seen in Figure 3, this drug regimen leaves room for the later infusion of engineered T cells, but can be very dangerous if the immune system is too thoroughly depleted.

Five patients with severe, treatment-resistant lupus (four women and one man) participated in the study. Lupus impacted several of their organs, including the kidney, heart, lungs, and joints. In addition, these patients did not respond to steroids, antimalarial drugs or other immunosuppressive medicines.

Each of the patients received a transfusion of modified T cells after chemoablation treatment. The chemoablation successfully depleted patient B cells while T cell numbers remained within normal range. Moreover, the team could no longer detect malignant autoantibodies (ie. anti-double stranded DNA antibodies). The participants’ responses to vaccines also remained largely unchanged, suggesting that the CAR T therapy correctly targeted detreminal B cells without damaging the entirety of the immune system.

Three months later, prior symptoms including kidney inflammation, arthritis, fatigue, and heart fibrosis disappeared, and all other immunosuppressive drugs could be discontinued. The symptoms did not return even when B cells began to reconstitute months later. Remission was defined by DORIS, a standardized criteria used to measure lupus symptom severity.

This study demonstrates how CAR T can send treatment-refractory lupus to remission. This is a first hopeful step. The search is now on for ways to improve CAR T induced remission for prior B cell ablation using a cocktail of cytotoxic drugs. The study also opens the door to the possibility of applying CAR T to other difficult to treat autoimmune diseases.