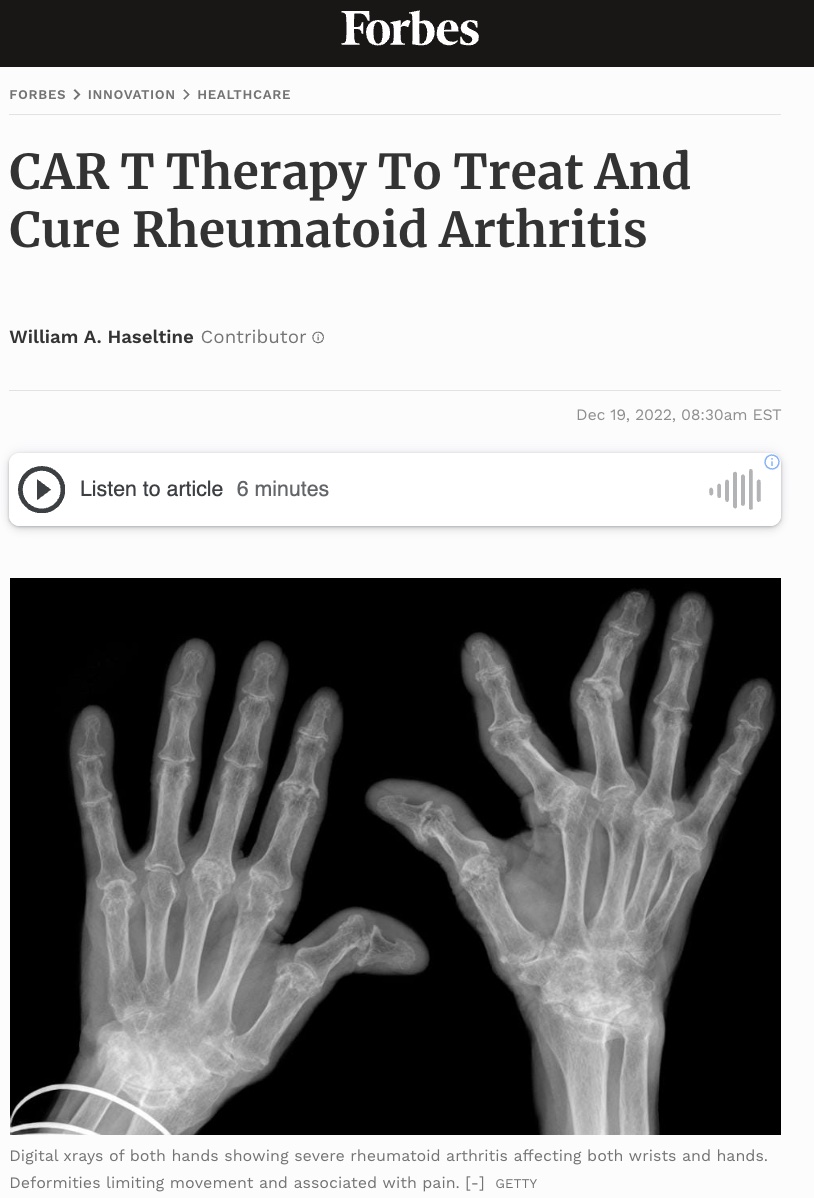 Here we describe the use of CAR T therapy to treat mice with experimental rheumatoid arthritis. Previous installments discuss the fundamentals of CAR T and its applications for B cell cancers, multiple myeloma, lupus and the heart, as well as the use of antibody switches to control CAR T cell activation and new research on combination CRISPR/CAR T therapy.

A study published in the Journal of Immunology advances work towards a cure for rheumatoid arthritis via cell mediated therapies. Around 1.3 million people in the US have this autoimmune disease. The condition can severely impair quality and can reduce life expectancy by 3 to 10 years. The study builds upon a recent cancer innovation to effectively target the cells associated with disease progression. Although the results have not yet been verified in humans, the findings demonstrate the burgeoning potential of this treatment to address autoimmunity.

Rheumatoid arthritis (RA) differs from the “wear and tear” arthritis most recognize. Rheumatoid arthritis occurs when the immune system wrongly attacks the body’s own joint tissues and leaves widespread inflammation in its wake. Figure 1 clearly illustrates how the injured joint tissue swells and erodes the bone. The affected joints often become painful, stiff and red as a result. Further side effects include fever, fatigue and weight loss.

Existing treatment options usually involve medicines to suppress the immune system and slow down disease progression. However, these treatments do not address the underlying cause: the errant and self-reactive immune cells. 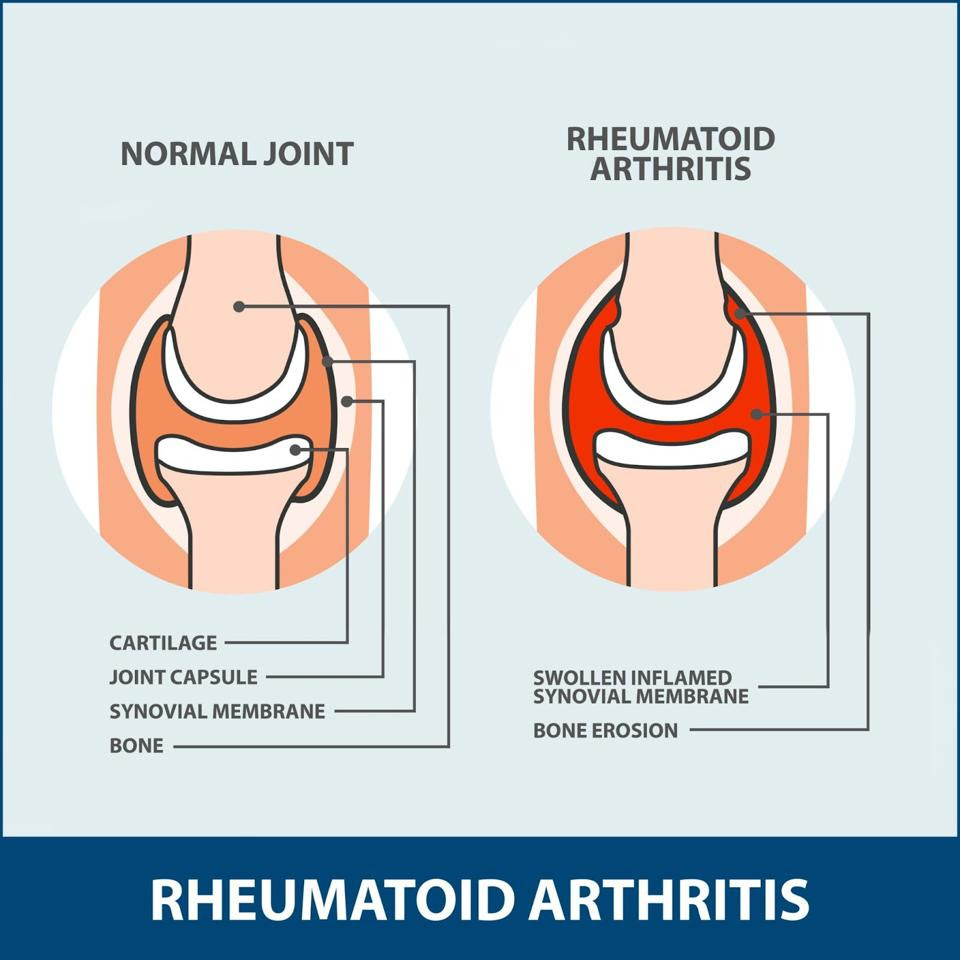 Current understandings of autoimmune arthritis suggest that the disease relates to a set of genes called human leukocyte antigen (HLA) class II. Many versions of this gene exist. In general, reading these genes produces a variety of molecules which can present biological tags to nearby helper T cells, also known as CD4+ T cells.

The system works similarly to a flag and pole. The biological tag—formally known as an antigen (Ag)—acts as a flag; the flag cannot be read unless a major histocompatibility (MHC) class II molecule lifts it up for helper T cells to see. Corresponding helper T cells can then recognize their “flag,” bind to it, and trigger an immune response.

Researchers at the Memphis Veterans Affair Medical Center sought to target the pathogenic helper T cells responsible for rheumatoid arthritis. To accomplish this, the team designed a CAR T cell that autoreactive helper T cells can bind to.

A typical Chimeric Antigen Receptor (CAR) T cell artificially combines an antigen-detecting region derived from antibodies with a signaling domain derived from killer T cells (see Figure 3). Once infused into the blood, the CAR T cells detect antigens on the surface of cancer cells and subsequently eliminate the cancer. As this method does not work against pathogenic CD4+ cells, the researchers developed their own chimeric antigen receptor in response. 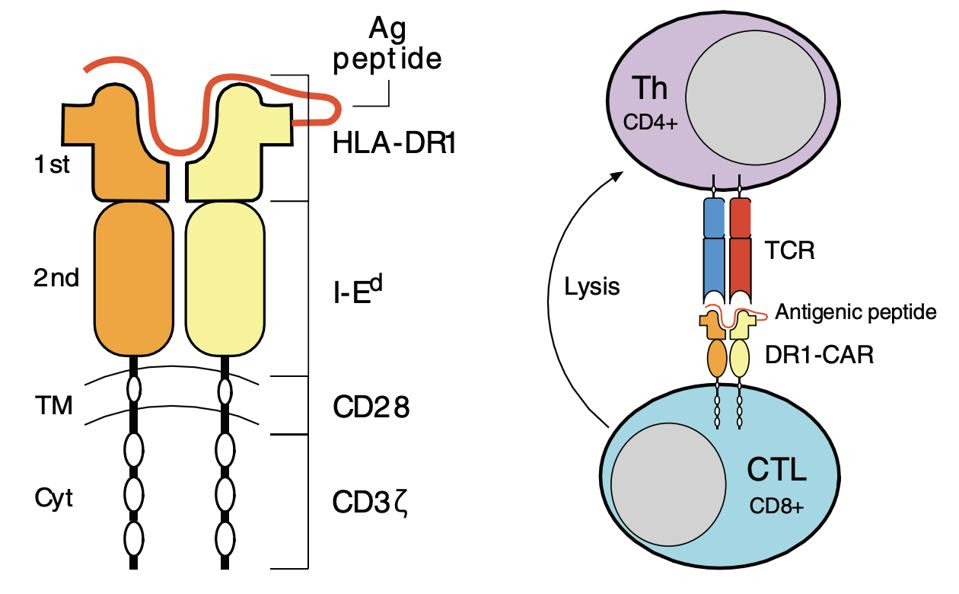 The researchers then used the CAR T cells on mice immunized with collagen type II (CII). This induced autoimmunity similar to that of human rheumatoid arthritis. The team removed killer T cells from the mice, genetically modified them to express the DR1 chimeric antigen receptor, and reinfused them into the body.

In addition, the treatment delayed the onset and severity of rheumatoid arthritis in mice when given early on in disease development. The eventual arrival of arthritis signaled that the CAR T cells, effective as they may be, circulated in the body for a shorter time than expected. The CAR T cell design may need further adjustments to support CAR T cell expansion inside the body.

This study illustrates that CAR T therapy can indeed translate from cancer to autoimmune treatment. The CAR T cells successfully targeted and eliminated self reactive CD4+ cells, as well as reduced autoantibody production. While the concept proves feasible in mice, the hope is to translate this work for human use. The results broaden the scope of possibility for treating and potentially curing rheumatoid arthritis and other autoimmune diseases.