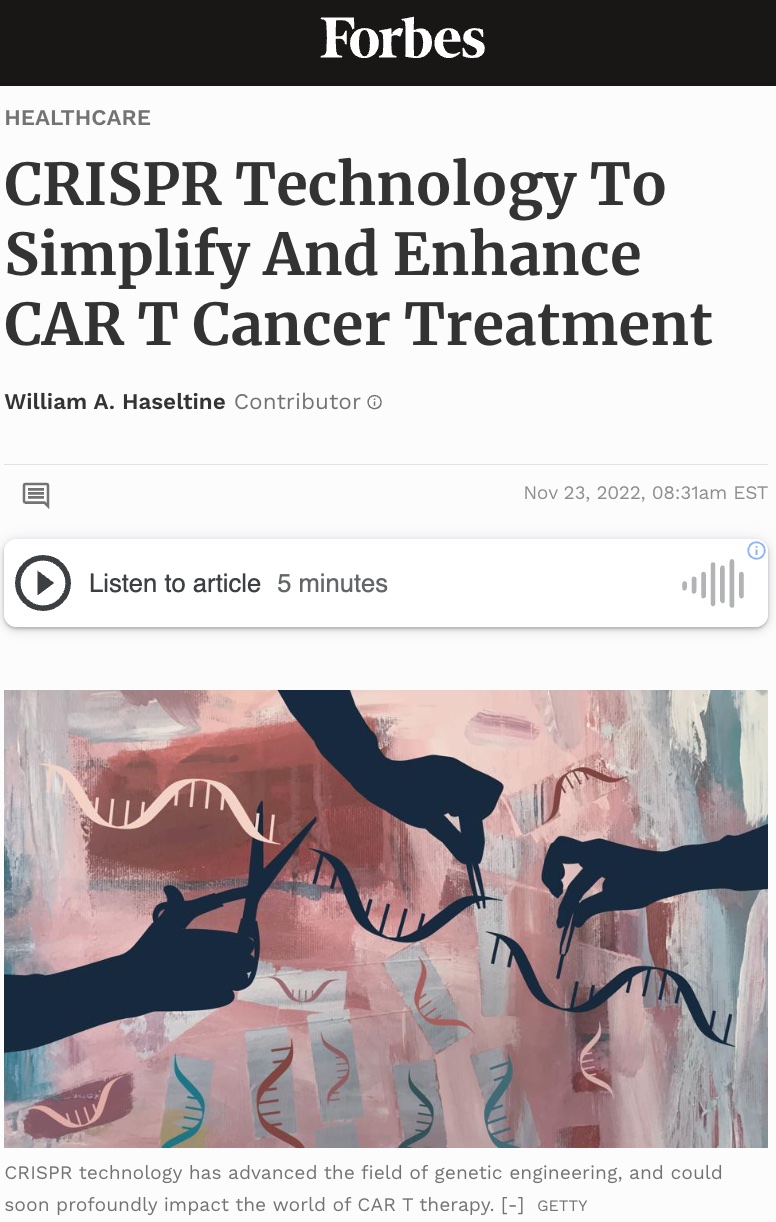 Here we describe the integration of CRISPR gene-editing technology to improve CAR T therapy design. Other alternative CAR T designs include mRNA vectors to create temporary CAR T cells and the use of antibody switches to control CAR T cell activation. Previous installments discuss the fundamentals of CAR T and its applications for B cell cancers, multiple myeloma, lupus and the heart.

A remarkable feat in cancer care, today people with difficult-to-treat blood cancers can receive CAR T therapy, a personalized “drug” made from their own immune cells. Chimeric Antigen Receptor T cell (CAR T) therapy relies on extracting a patient’s immune cells and modifying them in the lab with a new, synthetic receptor.

The new receptor allows the white blood cell to target and destroy cancer cells once re-infused back in the bloodstream. Evoking the patched image of a mythical chimera, these receptors merge signaling machinery typical of a T cell with an antibody-derived detection region to create a powerful “living drug” which continually expands inside the body. Figure 1 highlights the basic design of a CAR T cell, while Figure 2 illustrates the step-by-step process in more depth. 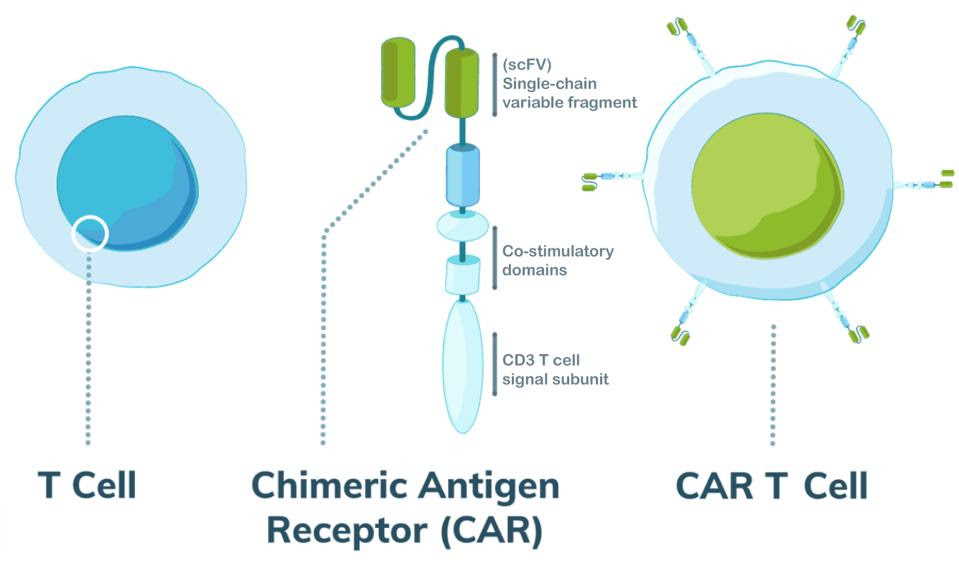 FIGURE 1: A T cell and a chimeric antigen receptor combine to create a CAR T cell. Most approved CAR T therapies employ a similar CAR design. The receptor usually consists of an antigen-recognition domain (scFv), two co-stimulatory molecules to help the cell expand and persist inside the body, and a CD3 T cell signaling subunit to activate the cell upon binding. 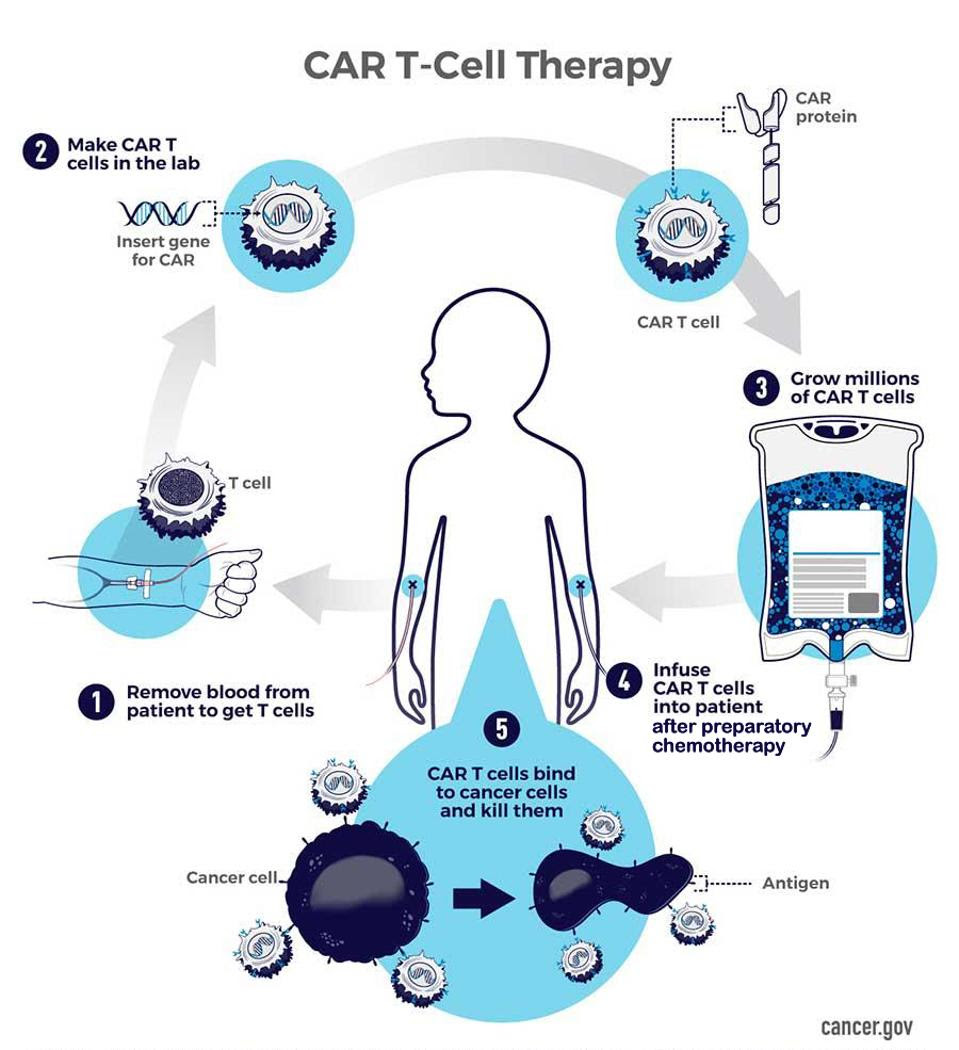 FIGURE 2: In CAR T therapy, 1) T cells are first isolated from the patient’s collected blood. 2) In the lab, these T cells are genetically modified to equip the desired chimeric antigen receptor. 3) Scientists multiply or expand the number of CAR T cells to millions before 4) the lympho-depleted patient receives the CAR T infusion. 5) The modified T cells circulate the blood, targeting and eliminating encountered cancer cells.

To craft CAR T cells, the very genes of the T cells must be altered to express the chimeric antigen receptor. Gene editing, therefore, provides the foundation for the therapy.

Integrating CAR genes normally requires the use of a viral vector. Retroviruses in particular have the unique ability to insert and meld their own foreign genetic material into human cells permanently. This allows viruses to use host machinery to produce viral proteins.

Scientists have repurposed this strength to deliver CAR genes into T cells. An inactivated form of the virus is filled with genetic material which encodes for CAR. The desired genes are then transferred from the virus into the T cells through a process called transduction (see Figure 3). As if reading biological instructions, the T cell uses the genetic information to construct the receptor before expressing it onto the cell surface. 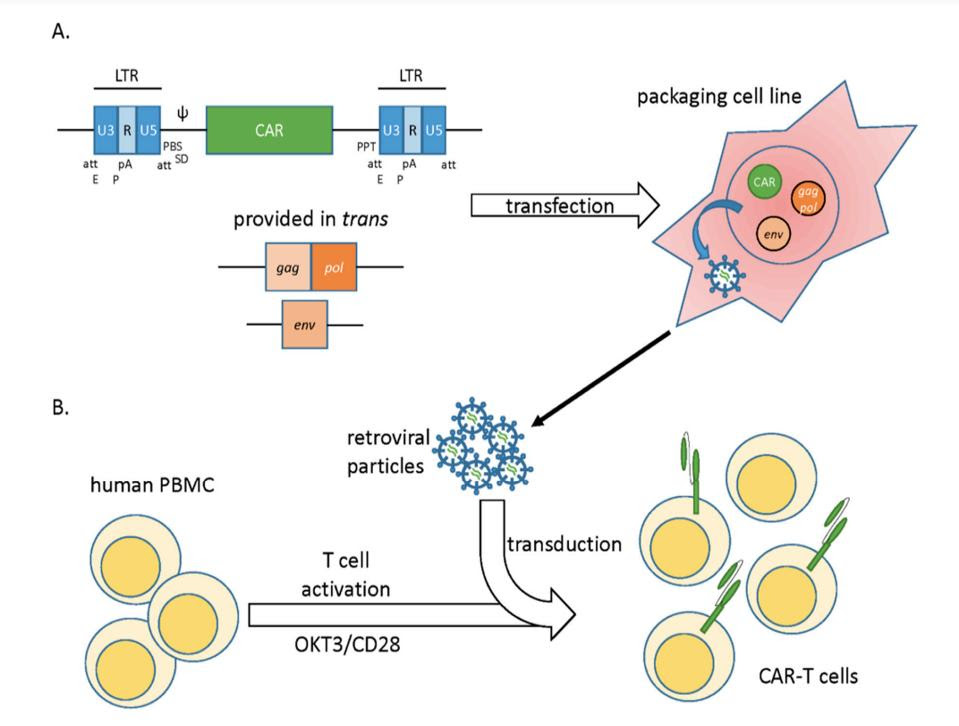 FIGURE 3: How to modify T cells to express chimeric antigen receptors. A) Essential viral genes are removed and replaced with a vector carrying CAR genes. B) The produced viral particles transduce the genetic information encoding CAR, ultimately enabling the T cell to create and place the new receptors on its cell surface. 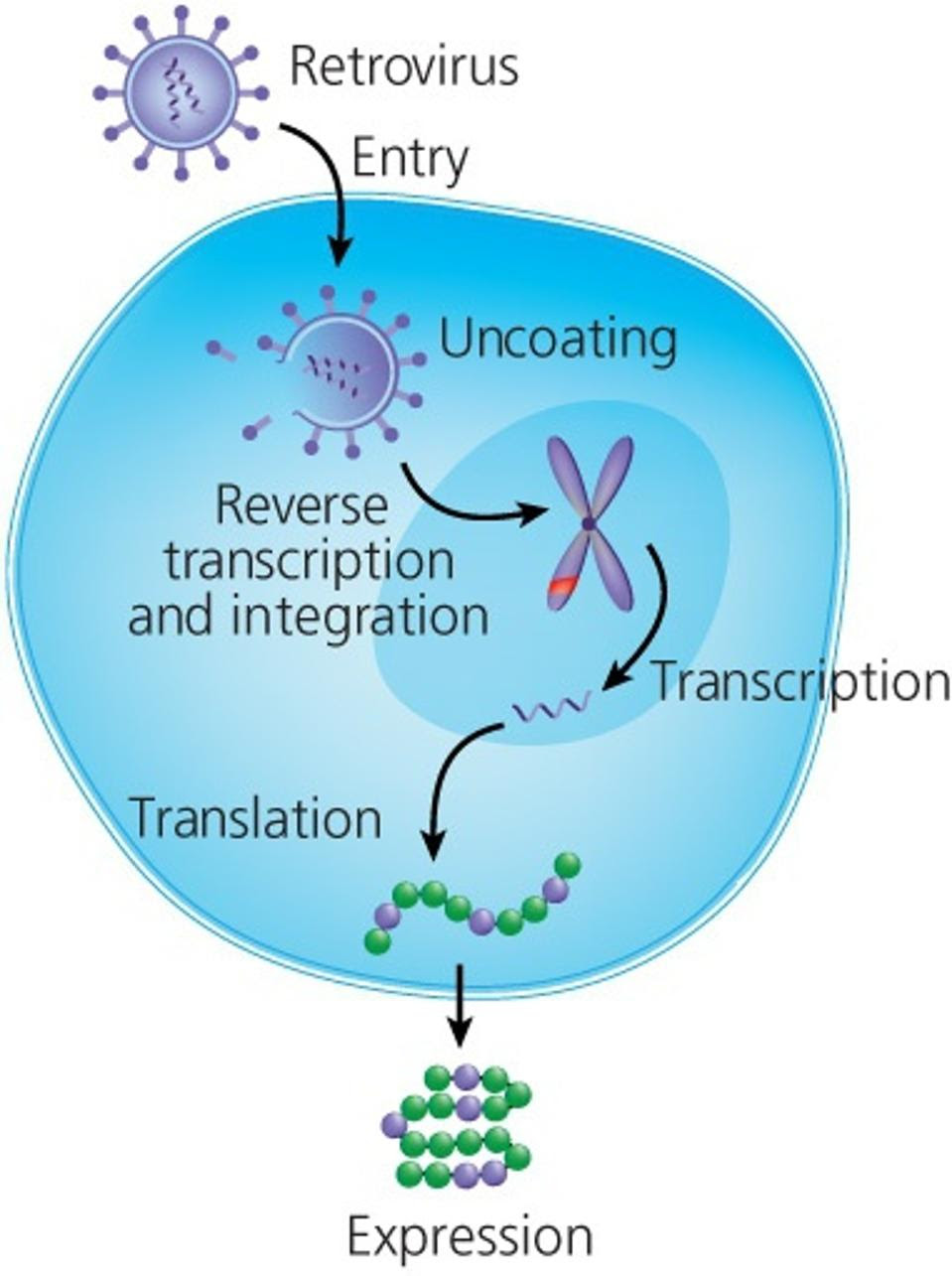 Figure 4: Retroviral transduction of T Cells. Translation of the synthetic genes results in the addition of chimeric antigen receptors on the T cell surface.

The industry standard may depend on viral vectors, but the procedure lacks in some aspects. This stage of the CAR T process is the most time-consuming and expensive; it can take a year or longer to produce a batch of viral vectors, and can cost up to $50,000 per dose. For these reasons researchers now hope to turn to CRISPR technology, a recent scientific breakthrough in gene editing, to resolve these issues.

CRISPR originates from organisms such as bacteria and plays a major role in their defense. The acronym CRISPR stands for Clustered Regularly Interspaced Short Palindromic Repeats—in essence, they are short, repeating DNA sequences which read the same forwards or backwards, similarly to words such as “MADAM” or “DEED.” Sandwiched between these repeats are protospacers, a genetic history of viruses the bacteria encounters (see Figure 5).

When a virus tries to insert its genetic information into the bacteria, the bacteria can recognize the sequence from its protospacer catalog. The bacteria transcribes the protospacer DNA into RNA; this RNA guides enzymes such as Cas9 to the viral DNA to cut and deactivate it.

The same CRISPR/Cas9 interface can also snip human DNA. As seen in Figure 6, an RNA guide can be made to cut DNA at a specific site. The broken DNA, eager to repair itself, can easily adopt a new DNA sequence in that location. 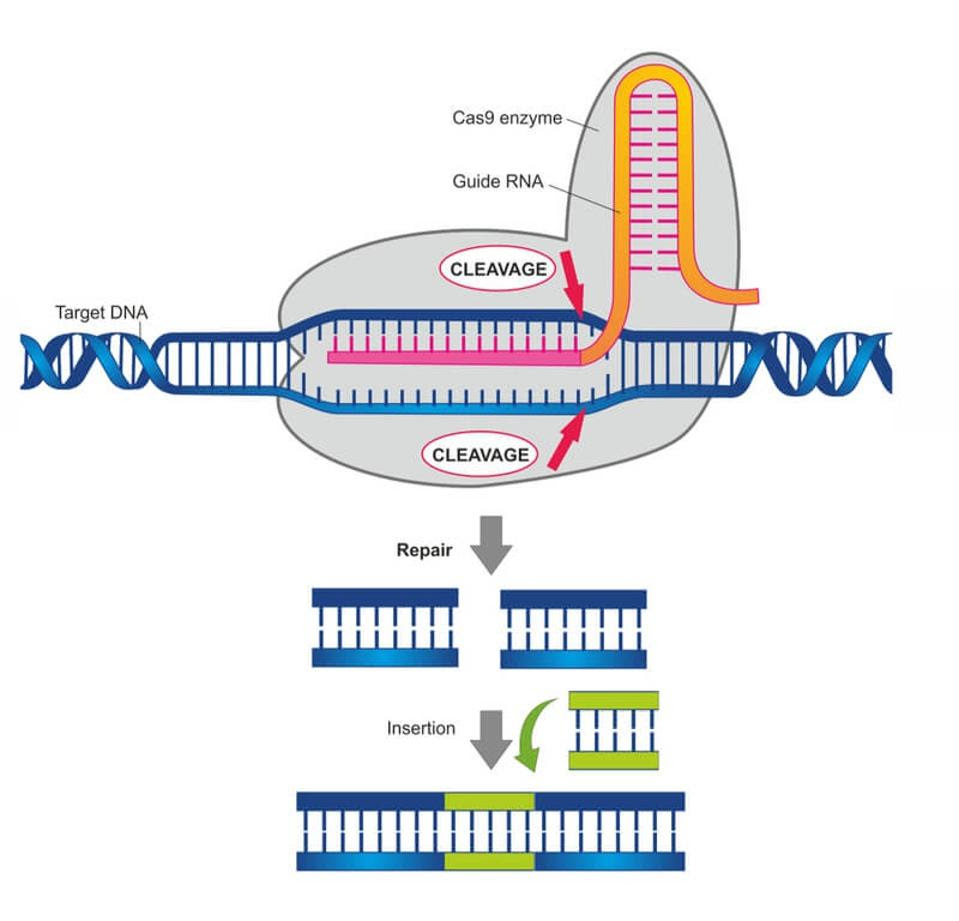 FIGURE 6: Researchers leverage CRISPR/Cas9 to cut and insert genes at a desired site on the genome. The guide RNA directs the Cas9 enzyme to snip the DNA at a specific location.

CAR T therapy, although a triumph of human engineering in its own regard, still has room for improvement. There is potential to propel CAR T design forward by integrating contemporary innovations such as CRISPR/Cas9 technology. Although this method still requires T cell manipulation outside the body, this change could streamline the process while becoming more accessible. The most critical step now is to test the feasibility of this concept. The next installment in the series will explore the latest clinical results from PACT Pharma and the University of California, Los Angeles on their CRISPR/CAR T dual interface.