How To Mend A Broken Heart 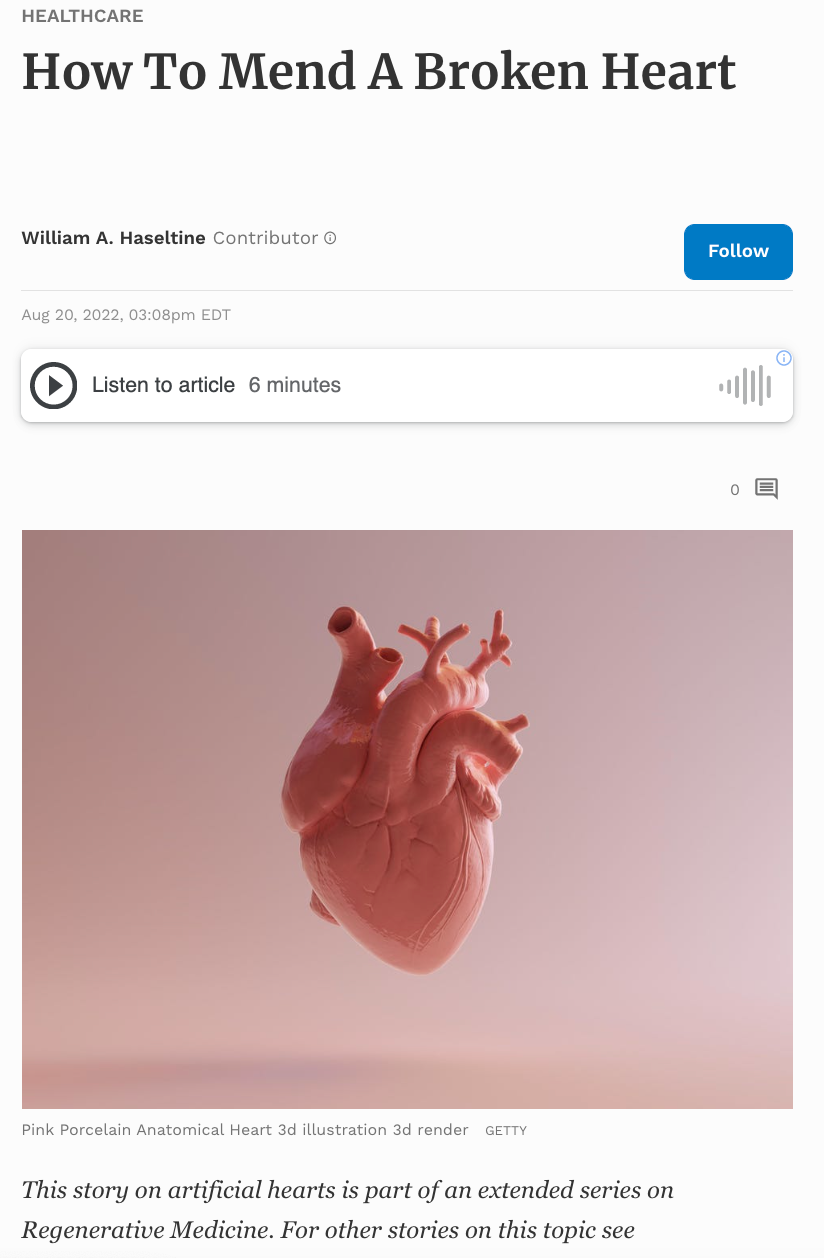 This story on artificial hearts is part of an extended series on Regenerative Medicine. For other stories on this topic see williamhaseltine.com and search for Regenerative Medicine. My definition of Regenerative Medicine is any medical modality that returns us to normal health when we are damaged by disease, injured by trauma, disadvantaged by birth, or worn by time. Modalities include: chemicals, genes, proteins and cells used as drugs, gene editing, prosthetics, and mind-machine interfaces.

Heart disease affects approximately 82.6 million people in the United States and is a leading cause of death among both men and women. One solution for those suffering from advanced heart failure is heart transplantation. Unfortunately, there is currently a nationwide shortage of human donor hearts. Scientists have attempted to create artificial hearts or use pig organs in lieu of human hearts for transplantation surgeries. However, current methods to produce artificial hearts are generally unsuccessful and the use of pig organs for transplants can lead to serious infections.

Now, a group at Harvard University is tackling this issue through a new, innovative method of growing artificial hearts. By building an artificial structure and implanting cardiac cells, researchers were able to grow the cardiac cells in a pattern that mimicked the natural organization of muscles in the heart. This study serves as a significant stepping stone toward developing artificial hearts that are fully functional.

The heart is largely made from muscles arranged in a helical fashion. When the heart contracts, its helically-patterned muscles engage in a twisting motion to push blood out of the heart. In fact, this helical patterning is predicted to be a crucial characteristic of healthy, functioning hearts. Many individuals who suffer from cardiac dysfunction also exhibit abnormal muscular patterning.

In the past, several studies have attempted to grow artificial hearts with helical patterning by using 3D printers. These studies have largely been unsuccessful because 3D printers are unable to achieve the tiny details of the heart’s structure within a reasonable amount of time. For instance, a 3D printer could take hundreds of years to print even a small component of the heart’s structures with enough detail for cells to grow in the correct patterns.

So, how did scientists at Harvard University achieve this feat?

Knowing that a simple 3D printer has significant limitations, Chang et al. turned towards a different technique: fiber-spinning. Fiber-spinning is a method that uses similar materials to 3D printers but can produce much finer, high-resolution structures.

Traditionally, materials are heated and extruded from a tiny hole to create singular fibers at a microscopic scale. The fibers can then be collected or processed to form 3D structures.

Chang et al. created a new fiber-spinning device with two major design features. First, instead of simply extruding the material haphazardly in one direction, the fiber-spinning device contains a “spinneret” that spins at high speeds. When the heated material is pushed into the device, the fibers are then extruded through a small hole in the side of the spinneret. This causes the fibers to collect in a cloud around the device.

Chang et al.’s second innovation was to include a strong stream of air at the top of the spinneret that could align the fibers to resemble the striations of muscles. From this, Chang et al. could collect the fibers at an angle, ultimately creating the helical patterns of cardiac muscle.

Using this method, Chang et al. was able to create 3D frames that resembled human heart ventricles. When the frames were seeded with human cardiac cells, the resulting tissues maintained the helical patterning of the frame.

Surprisingly, after 3 to 5 days of growing cardiac cells on the 3D frames, Chang et al. observed spontaneous contractions that resembled the natural activity of the human heart. This indicated that Chang et al.’s model ventricles could be used to study how muscle patterning affects heart function.

Finally, not only was Chang et al. able to create model heart ventricles that could contract, but by using their innovative fiber-spinning method, the researchers were able to recreate all four chambers of the heart. These individual chambers were then assembled to ultimately create a full-sized model of the human heart.

Overall, this study represents significant progress in our ability to create a fully functional artificial heart. While more work must be done to expand functional model ventricles into full-scale heart models, this study demonstrates real promise for the use of innovative fiber-spinning techniques for complex whole-organ formation.