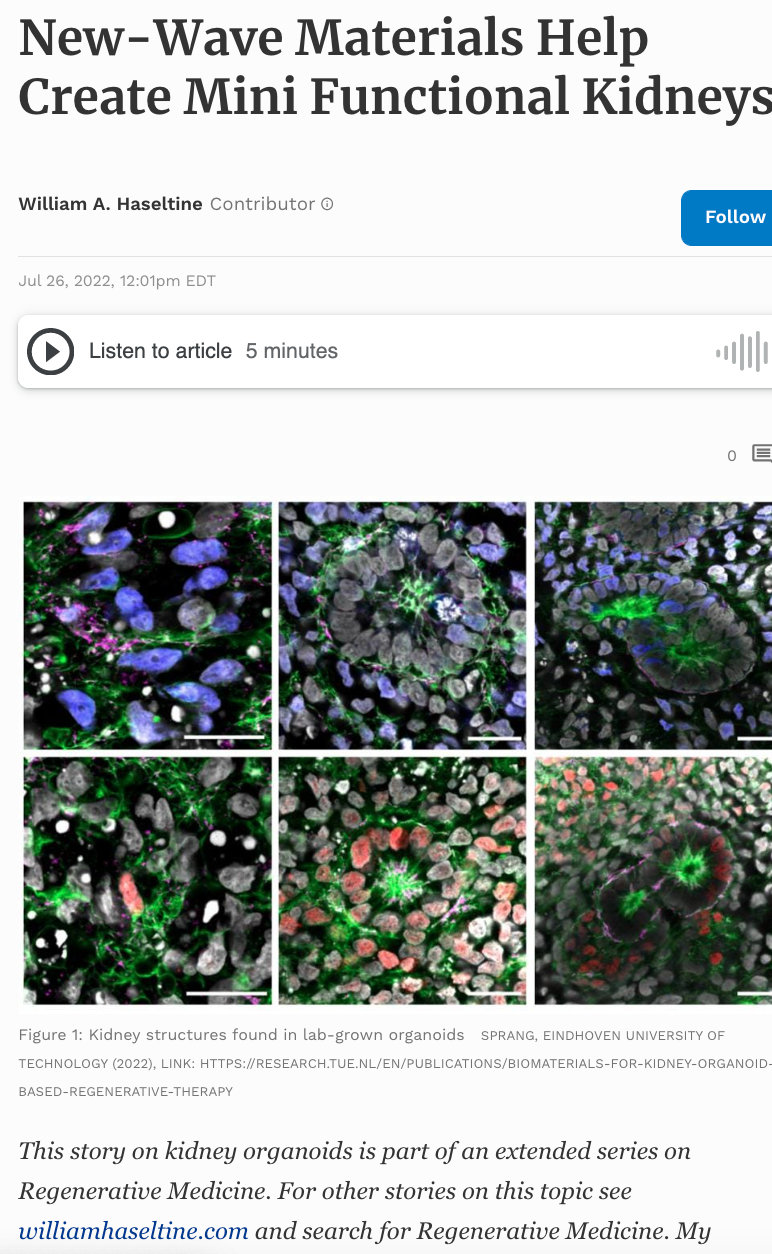 This story on kidney organoids is part of an extended series on Regenerative Medicine. For other stories on this topic see williamhaseltine.com and search for Regenerative Medicine. My definition of Regenerative Medicine is any medical modality that returns us to normal health when we are damaged by disease, injured by trauma, disadvantaged by birth, or worn by time. Modalities include: chemicals, genes, proteins and cells used as drugs, gene editing, prosthetics, and mind-machine interfaces.

We may be one step closer to developing artificial kidneys as a replacement for kidney donor transplants. Recently, the Eindhoven University of Technology published a paper detailing an improved method of growing kidney organoids. This may serve as a large stepping stone towards developing complex kidney organoids that can be used as a substitute for kidney transplants.

Chronic kidney disease affects over thirty-seven million people in the United States and occurs when the kidneys are damaged and slowly lose their ability to function. Kidney transplants are a viable treatment for chronic kidney disease. However, the number of individuals that require transplants remains substantially larger than the current supply of donor organs.

A potential solution to this organ shortage is the use of kidney organoids. Much like Lego pieces can be combined to construct buildings, organoids are small components of organs that are grown within a petri dish. As different types of kidney organoids are developed and used in tandem, scientists hope that they can eventually combine each critical organoid building block to form full, working kidneys.

One of the most important structures found in the kidneys is the glomerulus. The glomerulus is responsible for filtering out waste products and extra water in the blood. While scientists have previously developed kidney organoids, many of them have lacked functional glomeruli. As part of his Ph.D. research, Johnick van Sprang aimed to grow kidney organoids that contain functional glomeruli.

So, how are organoids made? Organoids begin at the stem cell. When stem cells are acquired from a patient’s blood or bone marrow, the cells can be reprogrammed into earlier, embryonic stages of cell development. With careful nurturing, the stem cells can then be transformed into nearly any cell type in the body. Once all the correct cell types have been assembled, scientists can use them to create the critical microstructures of an organoid.

Scientists have already discovered how to nurture stem cells into the matrix of cells that are usually found in the kidneys. However, one of the key aspects of forming functional organ components is to provide the cells with the correct environment or structure. Sprang believed that if the cells were placed in an environment that was similar to human tissue, then they would develop as they would in the human body—forming glomeruli in the process.

To test this, Sprang began by looking at a material called ureido-pyrimidinone. The molecules of this material are able to recognize each other and self-assemble into fiber-like structures. When these fiber-like structures come together in a gel state or solid, they resemble the fibrous components of natural tissue.

This new material is also held together by very weak, low-energy bonds. This means that the bonds between its molecules break and reform more easily, making the material very adaptable and dynamic. Depending on how the material is modified and processed, its fibers can exist as a solid, a flexible gel, or it can simply float in solution.

By engineering an environment using a material that resembles human tissue, Sprang hoped that he could simulate the body’s natural environment and structural cues to promote proper growth and the development of an advanced kidney organoid. In addition, by processing this new material to transition from a solution to a gel state after the organoid was introduced, the fibers of the material could travel into the kidney organoid while still in a solution state. If successful, this would mean that the material could deliver structural cues to the organoid’s surface as well as to the cells inside the organoid.

These results represent a significant step forward in developing functional elements of organs from organoids. As the fields of biomaterials and organoid research continue to advance it will be interesting to see how organoids continue to evolve and how they may help to increase the accessibility of organ transplant treatments.