Progress In The Search To Reverse Age-Related Vision Loss 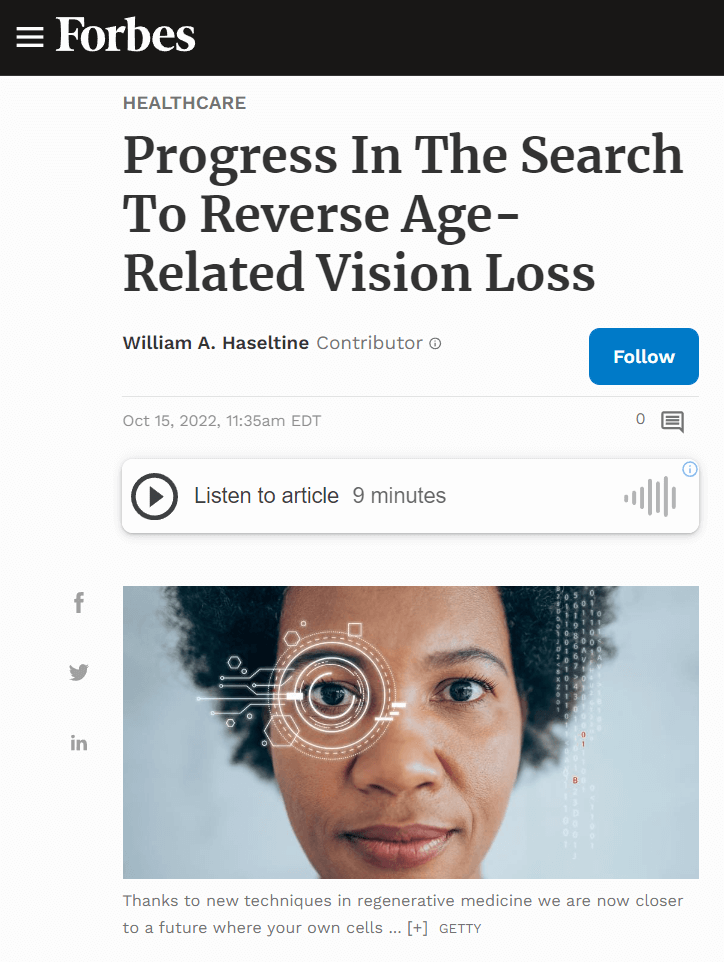 Thanks to new techniques in regenerative medicine we are now closer to a future where your own cells can be used to restore the sense of vision. A recent paper from Ripolles-Garcia et al. at the University of Pennsylvania School of Veterinary Sciences describes a novel approach to both the creation and surgical implantation of such cells directly into affected areas of the retina.

Macular degeneration is a leading cause of blindness. Over 15 million Americans over the age of 50 experience some form of age-related macular degeneration, a genetically linked disease characterized by the loss of vision. The most common form, dry macular degeneration, develops as a consequence of widespread damage to photoreceptor cells within the central region of the retina, called the macula. As the site with the greatest concentration of these light sensing cells, degeneration of photoreceptors in the macula gradually alters central vision, and in rare cases, can lead to complete blindness.  Remarkably, even as photoreceptor cells degenerate with age, studies show that the retina’s internal structure remains intact.

The team from the UPenn School of Veterinary Science and corresponding institutions has made considerable progress in the search to cure macular degeneration and other causes of vision loss. Ripolles-Garcia et al. demonstrates that retinal precursor cells derived from tiny samples of human pluripotent stem cells can effectively replace damaged photoreceptor cells. Further optimizing this technique to ensure integration with the rest of the retina could restore the sense of vision in millions of people.

New techniques in regenerative medicine have made it possible to take small samples of your own cells and revert them back into stem cells capable of regenerating into almost any type of cell in the body. For retinal therapies, this means first creating pluripotent stem cells (iPS cells) then applying cell specific treatments that gently nudge them into becoming retinal precursor cells. Ripolles-Garcia et al., in their experiment, injected these precursor cells directly into the retina with the goal of replacing damaged photoreceptors.

There are, however, major challenges to using stem cells for regenerative retinal therapy. First, to make up for the widespread prevalence of damaged receptors, large amounts of retinal precursor cells need to be delivered directly into the subretinal space without harming other structures in the eye. Second, ensuring the survival of these cells is dependent on avoiding activation of the innate immune system. Finally, the cells must be able to form connections with the rest of the retina to recover the sense of vision.

This study uncovered an innovative approach for not only transplanting stem cell-derived photoreceptor cells into the retina but also avoiding immune rejection. Ripolles-Garcia et al. recruited dogs with retinal mutations similar to those associated with human retinal diseases and treated them with retinal precursor cells derived from human pluripotent cells. This was then followed by a daily regimen of immunosuppressive drugs. These cells were remarkably able to make meaningful connections with the rest of the eye, leaving one question yet to be answered, “can retinal transplants actually restore the sense of sight?”

The first challenge this study had to overcome was how to safely deliver a sizable amount of photoreceptor precursor cells into the subretinal space. To allow a wide-gauge cannula to reach the back of the retina, some of the vitreous humor, the gel-like substance between the lens and the retina, usually has to be removed. Displacing the vitreous gel, however, can cause newly injected retinal cells to backflow into the rest of the eye, which further obstructs vision. Instead, Ripolles-Garcia et al. designed a smaller cannula that injected cells directly to the back of the retina without removing any of the vitreous layer.

The stem cell-derived retinal precursor cells used in this procedure were tagged with fluorescent dye before injection into the retina, enabling researchers to track their location and distribution over time with non-invasive imaging. In one of their first observations, imaging revealed that gravitational effects contributed to an unequal distribution of cells across the retina. Researchers argued that these effects could be mitigated in clinical settings by allowing individuals to lay horizontally in the days following the procedure.

A total of seven normal dogs and three dogs with retinal mutations were divided into two groups: those that continuously received a triple cocktail of anti-inflammatory, immunosuppressive drugs post-transplant and those not under any medication. Blood and urine samples collected throughout the evaluation period confirmed that this high immunosuppressive regimen was well tolerated in this experimental group.

In both groups, Ripolles-Garcia et al. observed an initial loss of transplanted photoreceptor cells in the early days following injection. The animals that did not receive the immunosuppressive regimen, however, experienced continued loss of these cells, until the fluorescently tagged retinal precursor cells were no longer detectable. Furthermore, researchers found that both normal and mutant dogs in this group showed signs of a robust innate immune response, given by the enhanced presence of macrophages, and activated microglia in the capillaries surrounding the retina. This robust immune response, concurrent with the complete loss of stem cell-derived photoreceptors, in dogs that did not receive anti-inflammatory drugs suggests that immune suppression is critical for avoiding immune rejection and prolonging the survival of transplanted cells.

For the final challenge in this study, researchers had to ensure that the photoreceptor cells that survived transplantation could integrate into the retina to restore vision. Within the group that was on the immunosuppressive regimen, the normal dogs had smaller fluorescently tagged clusters over time, which was not accompanied by an inflammatory response. The clusters of transplanted cells in the dogs with retinal mutations, on the other hand, remained unchanged. It is likely that the donated cells were filling the gaps left from degenerated photoreceptors requiring less remodeling of the retinal architecture.

As William Beltran, one of the senior authors of this study and professor of ophthalmology at Penn Vet, says, “What we showed was that, if you inject the cells into a normal retina that has its own photoreceptor cells, the retina is pretty much intact and serves as a physical barrier, so the introduced cells don’t connect with the second-order neurons in the retina, the bipolar cells. But in three dogs that were at an advanced stage of retinal degeneration, the retinal barrier was more permeable. In that environment, cells had a better ability to start moving into the correct layer of the retina.” The donated cells that extend connections to internal structures of the retina are then in a perfect position to send visual information to the brain.

This approach is still far from being used for treating retinal degeneration in humans. For one, the extent of immunosuppression needed to support these cells may not be practical, not to mention safe, in humans. The dogs recruited for this study were on immunosuppressive drugs for the duration of the study, until they were euthanized at its conclusion. It is unclear how long an individual would have to be on an immunosuppressive regimen to avoid immune rejection. Also, given the nature of using animal subjects, we still do not know whether donating new cells will restore vision. This may be a question that can only be answered through clinical trials.

A regenerative therapy that replaces damaged photoreceptors with retinal precursor stem cells could someday restore sight to millions of people. This study has set the stage for further optimization of not only the delivery of these cells but also their long-term survival in future clinical trials.