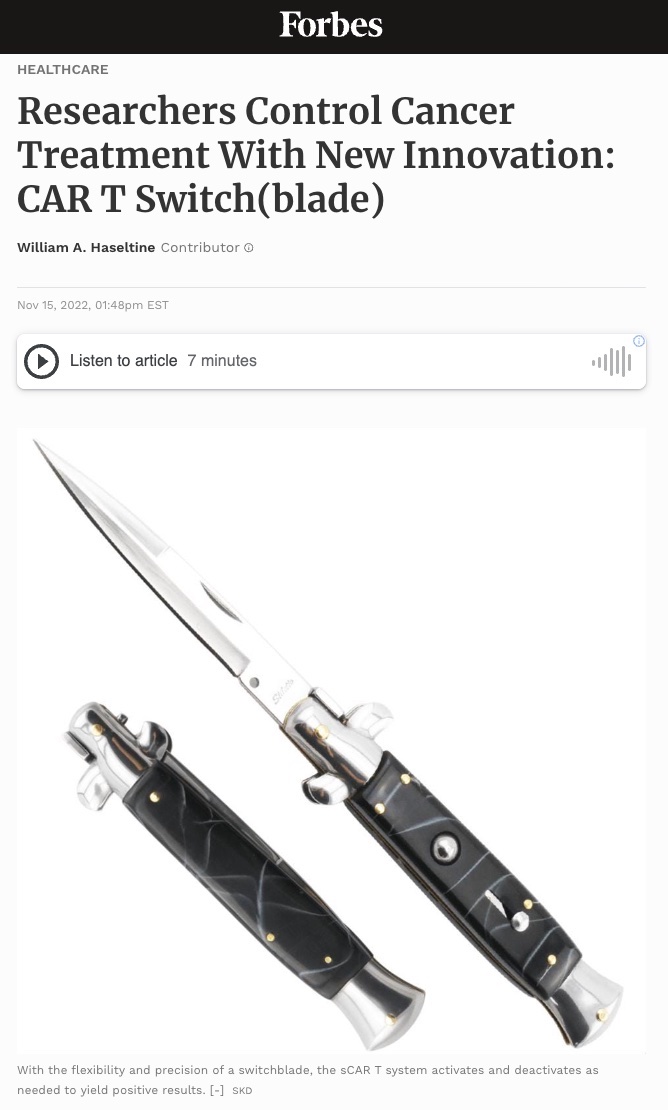 Here we describe a recent research advancement that fine-tunes CAR T therapy. Previous installments discuss the fundamentals of CAR T and its applications for B cell cancers, multiple myeloma, lupus and the heart.

People with treatment-resistant blood cancers turn to CAR T therapy, a recent medical innovation, for long-sought respite but can suffer potentially fatal side effects. Early study results from Scripps Research shine light on a possible solution: controlling the cells with a molecular switch. With this innovation CAR T cells can activate or deactivate as needed, simultaneously improving the therapy’s safety and versatility.

Chimeric Antigen Receptor T cell (CAR T) therapy entails extracting, modifying and increasing one’s own immune cells to counter cancer. While white blood cells cannot effectively attack cancer cells on their own, with genetic modification these T cells obtain a new receptor which can target antigen CD19, a biological tag found on the surface of cancerous and noncancerous B cells. The modified T cells, primed with new chimeric receptors and expanded to large numbers, can then bind and kill cancer cells once infused into the body (see Figure 1). Figure 2 describes the design of the CAR T cell in more detail. 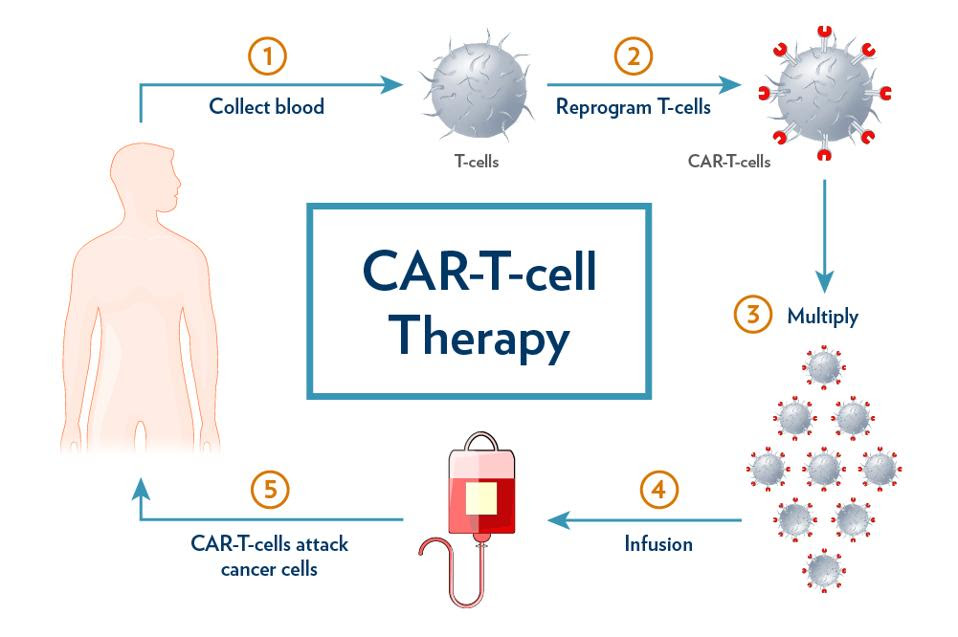 FIGURE 1: CAR T cell therapy begins with collecting blood from the patient. The T cells are extracted and reprogrammed to target an antigen found on the surface of cancer cells, typically CD19 or BCMA. These cells are then multiplied and reinfused into the patient after preparatory chemotherapy. 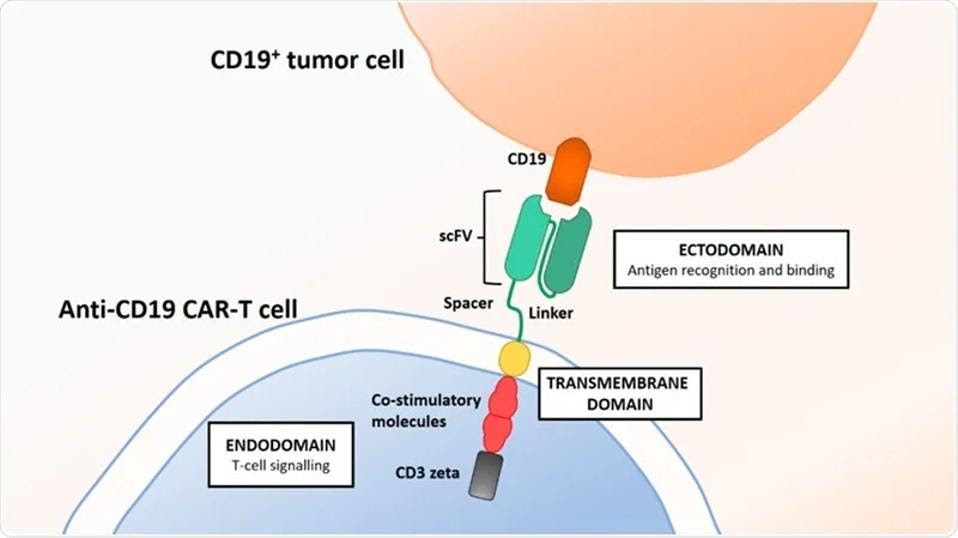 FIGURE 2: Typical CAR T design contains an antigen recognizing domain composed of a single chain variable fragment, an antibody-derived component which targets CD19 or BCMA on the surface of B cells. The inner cell is composed of co-stimulatory molecules which help the T cells persist in the blood and a CD3 protein subunit which stabilizes and transmits T cell activation signals.

The beauty of CAR T therapy lies in its ability to treat difficult blood cancers such as lymphoma, leukemia and multiple myeloma. These B cell cancers become resistant or unresponsive to previous lines of treatment—typically chemotherapy, targeted drug therapy, or radiation therapy. When these options are exhausted, CAR T cells attack the cancer anew and can even linger in the body to provide longer-term protection.

This health innovation can come with a price. Almost all CAR T patients experience a side effect known as cytokine release syndrome (CRS) or cytokine storm syndrome (CSS). As a result of CAR T cells continually stimulating the immune system, white blood cells may release inflammatory chemicals called cytokines. The cytokines can activate other white blood cells and perpetuate a cycle of inflammation.

The widespread inflammation manifests a gamut of symptoms ranging from mild to life-threatening. Mild to moderate symptoms include fluctuating fever, fatigue and muscle/joint pain. More severe cases experience low blood pressure and oxygen levels which can result in organ failure and death.

Cytokine release syndrome can usually be reversed within five to 17 days with treatments such as antihistamines, oxygen therapy or immunosuppressive medicines  as needed.

Common symptoms include confusion, tremors, and hallucinations. Symptoms can escalate, albeit more rarely, to delirium, seizure or coma. Supportive care can resolve these neurotoxic side effects within 21 days of CAR T therapy.

Why and How to Make the “Switch”

Although the negative effects of CAR T therapy can be reversed, the risk of fatality raises questions on possible ways to control the treatment. If CAR T cells could pause or mobilize when prompted, this could prevent complications from worsening; once side effects have stabilized, cancer-fighting activity could restart again.

Akin to a switchblade, researchers have developed a method to manipulate CAR T cells on and off to produce more precise results by using an antibody switch.

Figure 4 highlights the deviations from typical CAR T design. Researchers create the molecular switch by grafting a region called a peptide neoepitope (PNE) onto an anti-CD19 antibody clone; the protein neoepitope does not naturally occur in humans, making it a clear target for the therapy. Unlike traditional CAR T cells, sCAR T cells do not target CD19 but the peptide neoepitope on the switch. The desired response is therefore controlled in vivo by the presence and dosage of the switch. 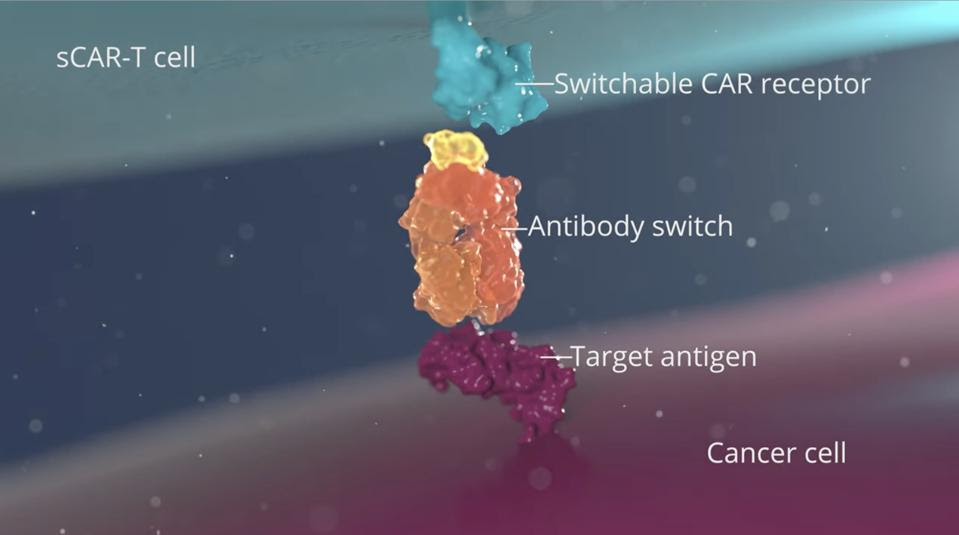 FIGURE 3: The antibody switch (orange) binds to the target antigen on the cancer cell (purple) and the switchable chimeric antigen receptor (blue); the T cell then releases chemicals which destroy the target cancer cell. 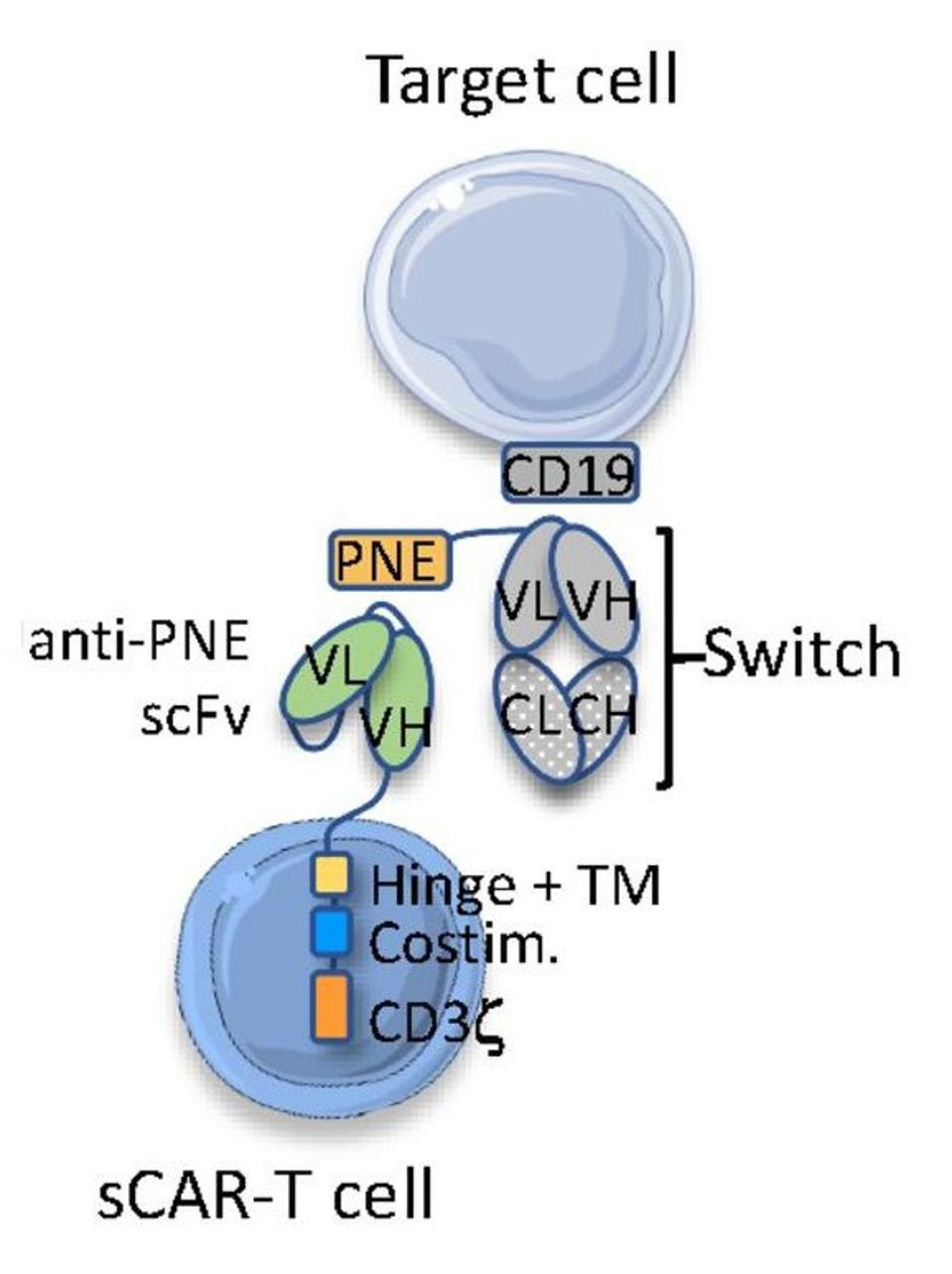 Calibr, the nonprofit translational research institute of Scripps Research, recently reported preliminary results from their sCAR T clinical trial. The Phase I study tested the safety and optimal dosage of their sCAR T treatment on nine patients with B cell malignancies. The participants underwent a median of five prior treatments for their condition.

Of the nine participants, seven responded to the therapy (78%) and six experienced a complete response (67%), meaning all detectable signs of cancer disappeared. A single infusion of CAR T cells and a single injection of molecular switches elicited most responses in participants, while further switch injections hinted at deepening responses over time. The lower dosing seemed to achieve promising early results, with some doses reaching higher amounts of CAR T cell in the peripheral blood over the first 90 days than other approved CAR T therapies.

Importantly, the switchable therapy successfully minimized adverse side effects. Cytokine release syndrome and neurotoxicity associated with CAR T therapy typically resolves within five to 17 days when treated traditionally. However, by holding or reducing the switch dosage after observing early signs of side effects, the CAR T cells could essentially halt their activity; as a result, the patients experienced side effects for a shorter duration of time (between two to three days).

The Future of sCAR T

The future of CAR T therapy continues to brighten. The early study result from Scripps Research suggests that switchable CAR T cells are not only safe to use for patients with B cell cancers, but comparatively safer and more effective than some CAR T therapies currently on the market. This also bolsters confidence in the universal molecular switch design. Using this basis, CAR T therapy could likely target any therapeutic antigen by altering the molecular switch. Further down the line, perhaps mRNA and sCAR T technology could combine to create the most ideal form of CAR T therapy—one that forgoes the lab entirely to create a potent and controllable “living drug” inside the body.