You Can Now Control A Wheelchair With Your Brain Waves Alone 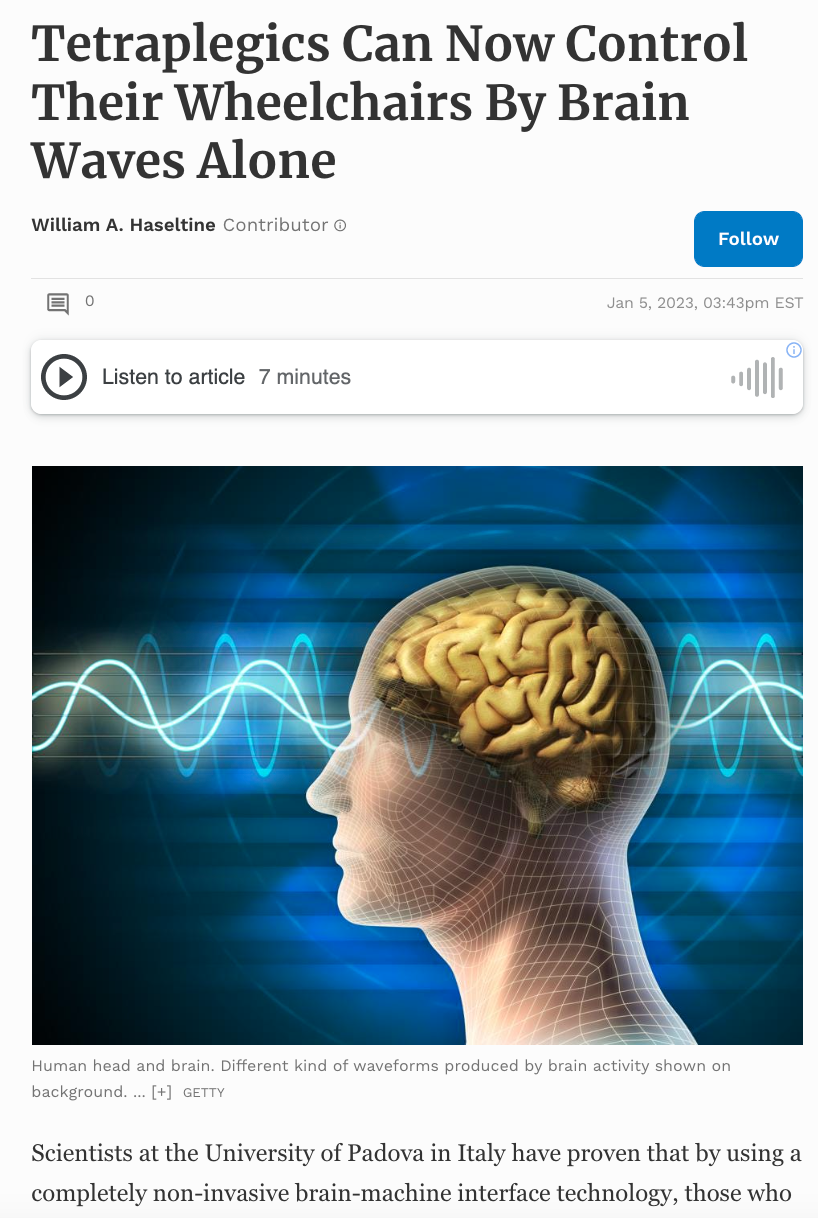 Scientists at the University of Padova in Italy have proven that by using a completely non-invasive brain-machine interface technology, those who are fully paralyzed can drive a wheelchair simply by using their minds and a cap that decodes their brain waves.

Brain-machine interface technology uses electrodes to measure the electrical activity in the brain. Electrical activity in the brain can then be decoded and used to give directions to a machine. In the past, these machines have mainly been computers or robotic prosthetics, but recently scientists have considered how brain-machine interface technology could be used to control wheelchairs.

Researchers have created brain-machine interface-controlled wheelchairs in the past, but none of them have actually been applied to a clinical setting and tested on those with severe motor impairments. Due to this, Tonin et al. were interested in conducting a study where they took a brain-machine interface-controlled wheelchair and translated the technology to a clinical setting with patients suffering from severe paralysis.

To achieve this goal, the team used a sensorimotor rhythm-based brain-machine interface to drive an intelligent robotic wheelchair and tested the robotic wheelchairs on three patients who were effectively paralyzed from the neck down. A sensorimotor rhythm brain-machine interface is based on the electrical signals that are emitted from the brain when people think about moving parts of their bodies. In this study, when the patients thought about moving both hands, the wheelchair would turn left. If they thought about moving both of their feet, the wheelchair would turn right. To move forwards, the participants would have to think of both commands at the same time.

The first question Tonin et al. was interested in exploring was how both the patient and the machine algorithm could learn from each other to achieve optimal control of the robotic device. Much like how social media apps customize personalized content based on user activity, Tonin et al. wondered how they could achieve the same synergy between a paralyzed patient’s brain signals and the machines decoding the electrical signals.

The three patients were trained over the course of a maximum of five months with three training sessions per week. During their training, patients were seated in a customized wheelchair and were asked to think about moving their hands or their feet. If their brain sensorimotor signals were properly decoded, these thoughts would cause a steering wheel in front of them to rotate to the left or to the right. In the early stages of the training process, the machine algorithm was re-calibrated several times according to each patient’s brain signals to improve the machine’s ability to decode and learn from the patient’s brain activity.

The researchers also determined that the types of electrical signals patient brains emitted became more focused with the course of training. While one patient became adept at emitting lower-frequency mu waves which are associated with motor function, another patient began emitting high-frequency beta waves. Beta waves are associated with active cognitive function.

The final test of this brain-machine interface was to see if the patients could successfully drive the wheelchair while navigating obstacles. This would prove that the brain-machine interface wheelchair could be applied to those with severe motor impairments in the real world. Patients were tasked with driving the wheelchair around a room that contained several obstacles, including four patient beds, traffic cones, and a wall. The patients would have to drive the wheelchair in a loop, making sure to avoid crashing into any objects. There were four waypoints (WPs) or sections of the track that required the participants to turn or reorient the wheelchair using their minds.

Overall, this study is a significant step when it comes to applying innovative brain-machine interface technology to a clinical setting. Hopefully, as researchers continue to adapt their algorithms and as brain-machine interface technology continues to progress, those who are severely motor impaired can look forward to a more independent and mobile future.