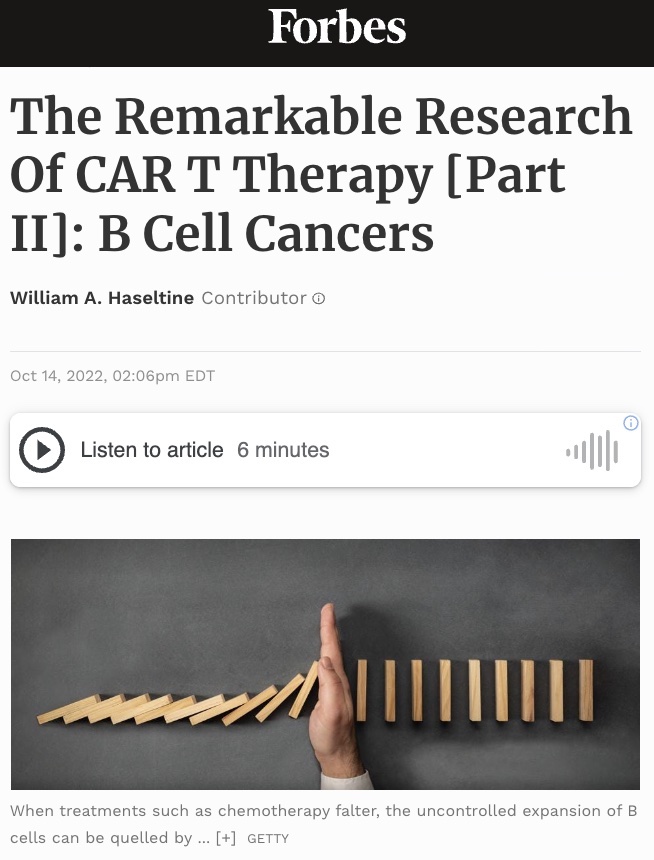 This is a series on the advances in CAR T, a remarkable immunotherapy treatment dubbed a “living drug.” The first installment lays the foundation for understanding how CAR T works. This second piece delves into the use of CAR T to treat B cell cancers.

CAR T is an effective treatment for some hard to treat cancers. This “living drug” is made by extracting killer T cells from the body, manipulating them to target cancer cells, multiplying the newly engineered cells and infusing them back into the body. Development over the last forty years has evolved the precision, efficiency and safety of this technology. Arguably the best example is the treatment of  B cell cancers.

B cells to B cell cancers

B cells gain function through differentiation. Plasma B cells are a type of B cell which produce essential antibodies needed to tag threats to the immune system. CUSABIO…

Figure 1 illustrates the development of antibody cells. B cell maturation begins with stem cells in the bone marrow and is completed with the antibody producing plasma B cells.

Typically, threats to the body leave trails of foreign antigen which can be followed. B cells detect these antigens and proliferate to eliminate pathogens, but these numbers quickly subside. This is done by design. The body regulates this process to ensure the bloodstream is not flooded with too many antibodies to prevent normal function. However, this system can go awry at any point. B cell precursors, intermediate cells or plasma cells can mutate and grow uncontrollably, causing damage to the body rather than shielding from it. When this happens, the immune system weakens and B cell cancers result.

Overview of the lymphatic system. This system maintains fluid balance in the body, absorbs fat from the digestive tract, removes waste products and abnormal cells, and protects the body from foreign invaders. Lymphoma is a cancer of the lymph organs (ex: lymph nodes), while leukemia concentrates in the bone marrow and blood. LYMPHOMA CANADA…

B cell lymphomas originate from the lymphatic system organs, vessels and tissues, such as the lymph nodes or the spleen. In contrast, leukemias circulate in the bone marrow and blood instead of the lymph organs. Although multiple myeloma is also a cancer of the bone marrow, it entails the abnormal growth of plasma B cells in particular.

Chemotherapy and radiation most successfully reduce the size and quantity of B cell tumors. Partial remission is very achievable, but complete remission—the total absence of cancer— is much more difficult to attain. For many, the cancer may temporarily recede for months or years after treatment before recurring. And when the cancer recurs, it can be resistant to treatment.

CAR T cell therapy addresses this problem by transforming patient immune cells into an anti-cancer drug. Cells are taken from the body and modified to detect the tumor cells. CAR T cells are fitted with a fusion protein (scFV, Figure 3) made from antigen-recognizing regions of antibodies. This component is typically engineered to target CD19, a B cell antigen known for its role in B cell signaling. This protein is found in B cells of all stages and is present on the surface of many B cell cancers. CD19 is not found on hematopoietic stem cells—those which have yet to mature and gain purpose; as a result, the therapy is less likely to target non-cancerous immune cells, an ideal quality in a therapeutic target.

CD19 is an antigen expressed on cancer cells. CAR T cells are fitted with an antigen recognition domain, a single chain variable fragment (scFV), to target the CD19 on the surface of these cancer cells. Once the antigen domain binds to the cancer cell, the CAR T cell can induce apoptosis to eliminate the tumor cell. BRITTEN, OLIVER, ET AL. 2019…

Once the CAR T cell binds to CD19 on the tumor cell, several signals are released from the endodomain that trigger cell death of the tumor cell through apoptosis. The co-stimulatory molecules found in the interior of the CAR T cell allow it to multiply and persist in the body.

For those who have B cancers which are unresponsive to alternative anti-cancer treatments, CAR T can deliver lasting remission and extend life expectancy by several years—sometimes without additional treatment.

This graph represents the survival rate of pediatric patients with acute lymphoblastic leukemia (ALL) with CAR T therapy; 48 months after initial infusion, 45% of patients still remained in remission. NOVARTIS…

For example, one study revealed that 44% of young patients with acute lymphoblastic leukemia (ALL) live at least five years without relapse after CAR T therapy. This is especially remarkable given how difficult it can be to treat the condition and the less than 10% five-year survival rate. Approved CAR T therapies also exist for patients with diffuse large B cell lymphoma (DLCL), follicular lymphoma, mantle cell lymphoma and multiple myeloma.

There is a caveat—it is possible to experience relapse after CAR T therapy. One contributing factor is CD19 antigen escape, a type of CAR T resistance. As illustrated in Figure 5, patients with antigen escape develop cancer cells which no longer express CD19 and thus escape recognition by CAR T cells. So while CD19 targeting has proven effective, this phenomena highlights the need to find alternative antigen targets to improve the drug’s efficiency.

One possible solution is dual targeting CAR T cells. By engineering T cells which detect more than one antigen on cancer cells, the therapy has a greater chance of attacking tumor-only cells and overcoming antigen escape. Current contenders include dual targeting of antigens CD19 and CD22, as well as CD19 and CD20.

CAR T shines best in solving what other therapies cannot. When other lines of cancer treatments such as chemotherapy or radiation cause relapse, CAR T therapy often provides a more lasting remission. There’s promise for these engineered T cells to become even more effective in the future with the advent of dual-targeting CAR T cells. And while none of the six FDA approved CAR T therapies are currently used as first-line treatment, developments are underway to establish this innovative technology as a primary line of defense. This is a major step forward for treating B cell cancers, and we can anticipate more to come.