The Whole World In Your Hand: Major Advances In Haptic Technology 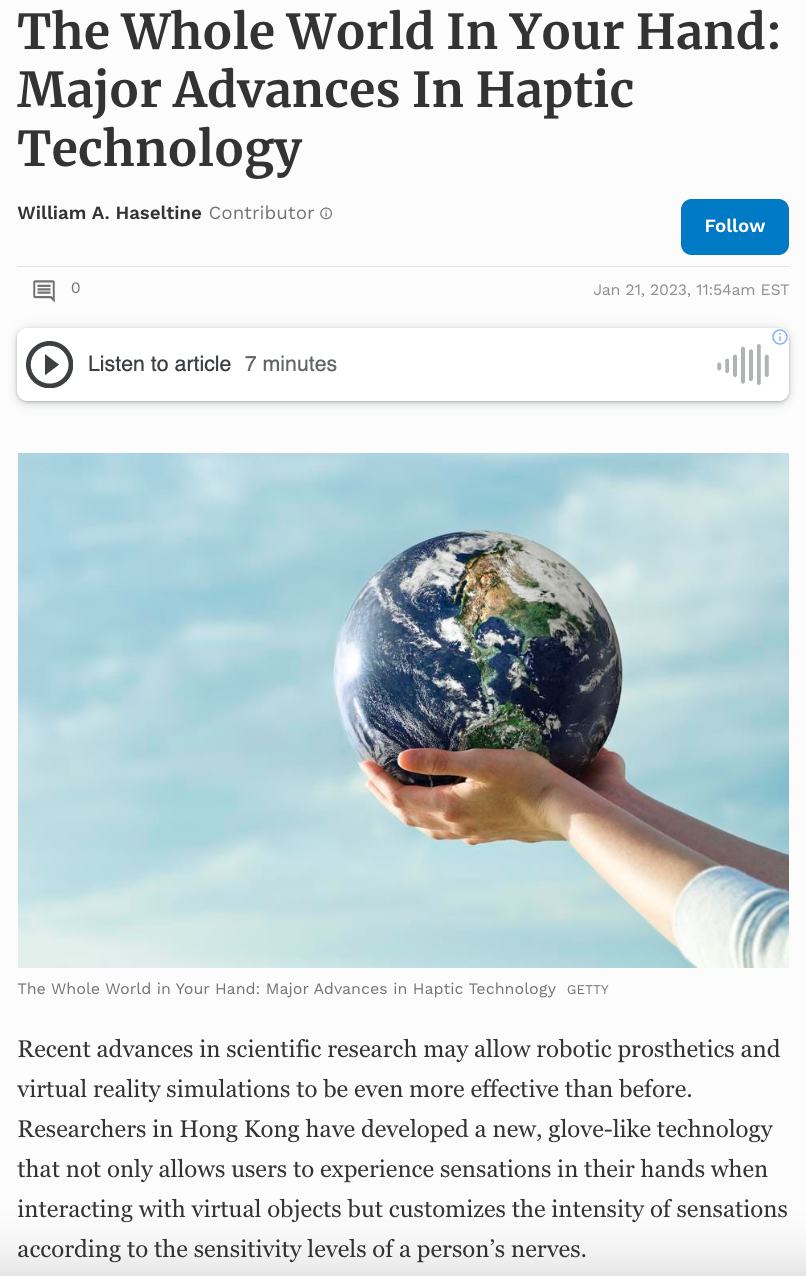 Recent advances in scientific research may allow robotic prosthetics and virtual reality simulations to be even more effective than before. Researchers in Hong Kong have developed a new, glove-like technology that not only allows users to experience sensations in their hands when interacting with virtual objects but customizes the intensity of sensations according to the sensitivity levels of a person’s nerves.

While scientists have developed haptic technology for clinical application in the past, previous attempts have often been bulky, inconvenient to use, and have not been customizable for each user.

Now, researchers have developed a new iteration of haptic technology that involves an ultrathin, glove-like technology called WeTac. WeTac contains several electrodes throughout the glove structure and provides electrical feedback to users to induce sensations of touch throughout their hands. This technology not only has the potential to improve the outcomes of robotic surgeries but is a significant development in haptic technology that could also be applied to those who are disabled and using robotic prosthetics.

The first challenge of creating the WeTac was to come up with a design that could emulate the dynamic and variable sensations that people feel when using their hands.

Consider the experience of shaking a person’s hand. You may only feel the handshake in certain areas of your palm or fingers. These areas of contact may change as you go through the movements of shaking their hand. The pressure of your grip or their grip may alter as well. Beyond this, some regions of our hands are innately more sensitive to touch than others. The feelings we experience in our hands are very dynamic even for something as basic as shaking somebody else’s hand.

The goal of Yao et al. was to design a haptic glove that could capture these dynamic sensations when users interacted with virtual objects. To do so, the WeTac was designed with 32 electrodes spanning the surface of the palm and the fingers. This would allow the researchers to adjust the intensity of electrical signals at 32 different points in the hand and allow them to induce more accurate sensations of touch throughout the hand.

The use of electrodes to create artificial sensations also enabled Yao et al. to create the WeTac in an incredibly lightweight form. Electrodes have previously been used in thin, wearable devices and can sit directly on the skin without causing any irritation. This makes them optimal for creating a lightweight and convenient device.

By using the electrodes, Yao et al. could induce electrical currents throughout the hand. The idea was that these electrical currents would activate the nerves in a person’s hand, effectively inducing sensations of touch that a person might feel from interacting with a physical object. Yao et al. designed the WeTac so that electrical currents could be produced by a blue control unit that would attach to the user’s wrist. This control unit would have wireless capabilities and could be controlled with a phone or computer. This would allow WeTac users to move freely.

To test the device, the first step for Yao et al. was to optimize WeTac’s electrical stimulation settings according to each participant. The sensitivity levels of people’s hands can differ across populations. For example, men typically display decreased sensitivity to touch compared to women. Older people also display decreased sensitivity compared to younger people. To customize the device, Yao et al. measured the average electrical stimulation threshold for each participant and across each of the 32 electrodes in their hands.

As expected, on average, women had lower thresholds for electrical stimulation than men. Younger individuals also displayed lower thresholds. The exception to this pattern was that women who exhibited a greater number of calluses on their hands due to their jobs had higher thresholds. In other words, Yao et al. found that beyond gender and age, hand sensitivity can also differ according to a person’s job or daily activities.

After calibrating the WeTac according to each volunteer’s sensitivity levels, Yao et al. were ready to test the WeTac in virtual reality simulations. The first simulation involved participants slowly grabbing a virtual tennis ball and a virtual cactus. This simulation would allow the researchers to determine that the WeTac could produce different sensations according to the texture of a stationary virtual object. After running the simulations, the team found that the tennis ball could induce gentle touch sensations, while the cactus would induce a spike sensation that was slightly painful or uncomfortable.

The researchers also tested a simulation where a virtual mouse and pieces of cheese appeared on the participants’ hands. The participant would then report the sensations they felt as the virtual mouse traveled across their hand to eat each piece of cheese. This allowed the researchers to determine that the WeTac could also effectively induce sensations of touch for a moving, dynamic object.

Overall, this study demonstrates significant progress in haptic technology. As the WeTac and other lightweight haptic feedback devices continue to be developed, we may begin to see more complex virtual reality technology and robotic prosthetics that utilize haptic feedback and can improve the outcomes of remote/robotic surgeries as well as the lives of amputees.