Even Mild Covid-19 May Cause Lasting Brain Fog (Part 3) 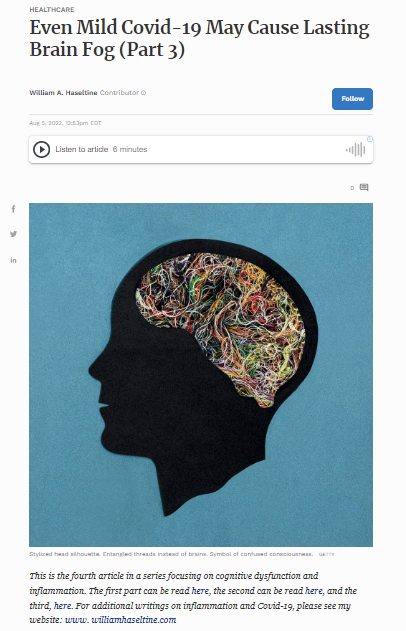 In previous installments of this series, we looked at new research that suggests even mild SARS-CoV-2 infection can impair cognitive function. The first step in this chain of events happens when the virus sets off an intense inflammatory response that eventually reaches the brain. Once there, inflammation triggers reactivity of microglial cells —the resident immune cells of the central nervous system— which produce yet more inflammation and interfere with the normal functioning of important cells, including oligodendrocytes and neural precursor cells (Figure 1).

But given that all of this happens off the back of inflammation, which we experience during any number of infections or injuries, wouldn’t we expect to see something similar unfold in other viral diseases? As part of their research, Fernández-Castañeda et al. asked themselves this same question. In the search for an answer, they turned to influenza.

Like Covid-19, the flu has also been associated with cognitive and neurological issues. And like SARS-CoV-2, influenza is rarely neuroinvasive — even though both viruses can infect the brain directly, as can many other viruses, it seems to happen only infrequently. It could be, then, that influenza causes cognitive issues through a similar mechanism as SARS-CoV-2.

To find out, the researchers exposed a group of mice to the H1N1 strain of influenza. This strain is not neuroinvasive in mouse models, meaning infection is restricted to the trachea and lungs. To further keep things consistent with their Covid-19 experiments, the researchers made sure that the mice suffered only mild flu, as evidenced by minimal sickness behaviors and minimal weight loss.

Despite largely mild illness, the mice showed signs of elevated inflammation, with a noticeable increase in cytokine and chemokine levels. The researchers found these both in the blood as well as in the cerebrospinal fluid, indicating that inflammation had made its way into the central nervous system.

The influenza-induced cytokine profile closely mirrored that of mice with mild respiratory Covid-19 (Figure 2). In both cases, C-C motif chemokine ligand 11 (CCL11) was present in cerebrospinal fluid from seven days all the way to seven weeks after infection. In fact, CCL11 levels were higher at seven weeks than they were at seven days.

This means the first part of the mechanism driving cognitive impairment after Covid-19 —the peripheral inflammation that triggers neuroinflammation— is also present during infection with influenza. What about the remaining elements?

The increase in activated microglial cells was accompanied by both damage to oligodendrocytes and by a decrease in the production of new neurons in the hippocampus, called neurogenesis. The exact same pathology seen in the Covid-19 mice.

Neurogenesis in the hippocampus was impaired as early as seven days following influenza infection, and this persisted until at least seven weeks after infection. Microglial cells in this region remained reactive throughout. Unlike the Covid-19 mice, however, those exposed to the flu showed signs of recovery to oligodendrocyte numbers. Although there was a marked drop at seven days post-infection, the oligodendrocyte population had normalized by seven weeks. This correlated with a steady reduction in microglial reactivity during the same period.

So although they share the same underlying mechanism, the cognitive dysfunction at the hands of influenza differs to that caused by SARS-CoV-2; they both trigger a lasting drop in neurogenesis in the hippocampus, but only SARS-CoV-2 tiggers additional lasting damage to the production of oligodendrocytes.

The consequences of viral infections can extend for many weeks, months, and even years after infection. As far as cognitive impairment is concerned, these findings identify systemic inflammation —ultimately manifest in the brain— as a driving factor.

Not all viruses are going to have the same impact since not all of them set off the same magnitude of inflammation. This holds true even for different strains of the same virus — although influenza as a whole is not particularly known for sparking neurological issues, the strain that caused the 1918 Spanish flu pandemic led to a sharp uptick in Parkinson’s disease. As the strain slowly decreased in virulence, the intensity of the inflammatory response followed suit and so too did the frequency of neurological and cognitive symptoms. But it may only be a matter of time before another virus with such capability arises.

This is evident with SARS-CoV-2, which has by and large been characterized by the potency of the inflammatory response it triggers; in a sense, it’s a hallmark of the virus. This manifests in cytokine storms, it manifests in hypercoagulation, and it manifests in worryingly high levels of cytokines and chemokines circulating in the blood and in the cerebrospinal fluid.

Although we can expect slight differences across variants, the common theme is long-term cognitive and functional damage — some of which shows up immediately, and some of which may only show up much later.