Getting a Grip on Influenza: The Pursuit of a Universal Vaccine (Part 3) 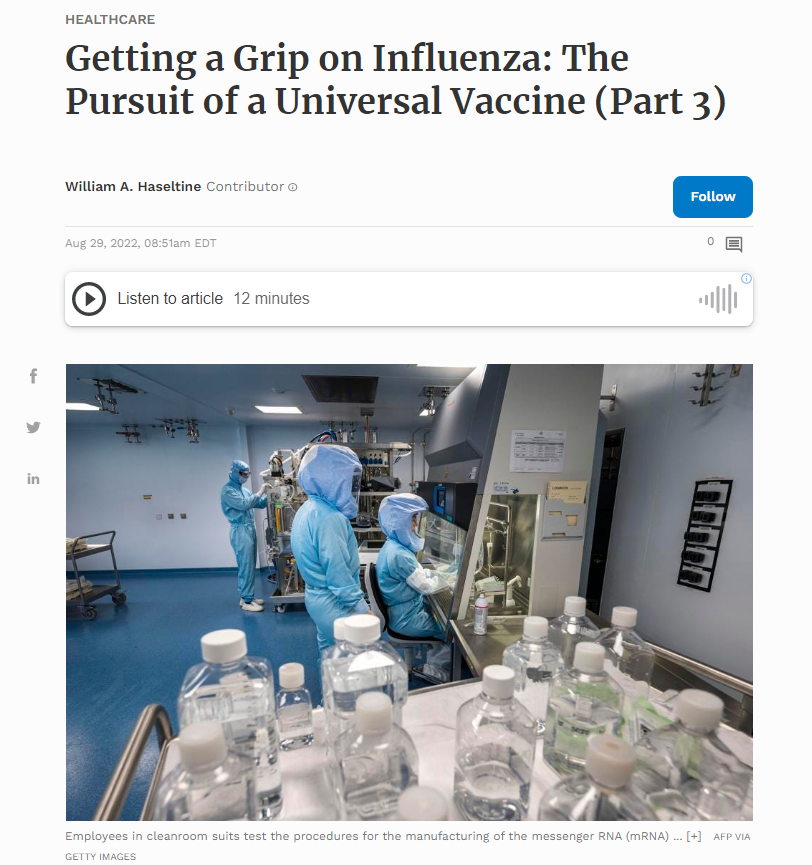 This is a short series about a recent breakthrough on the road to developing a much sought-after broadly neutralizing vaccine against all influenza A viruses. If successful, it may act as a precursor to a truly universal flu vaccine, one that protects against all types, subtypes, and lineages of the virus. The breakthrough may also provide a blueprint for developing a Covid-19 vaccine that retains its efficacy in the face of new variants.

In the first part of this series, I gave a brief overview of the history and nature of influenza viruses, including why it has been so difficult to develop successful vaccines. Here, and in the previous article, I discuss some of the attempts that have been made to overcome these challenges, including their shortcomings. And in the last few installments I will offer a detailed analysis of the latest —and most promising— advances in the field.

Traditional influenza vaccines are based on “killed” influenza viruses. Inactivated viruses cannot cause infection or disease, but when injected they rally our immune system into action all the same. While our immune system clears the viruses, it learns about them. Next time we’re exposed, it is already primed to defend against infection.

But there are a couple issues with influenza vaccines that rely on inactivated viruses. For one, they take a long time to produce. Candidate vaccine viruses need to be grown, either in fertilized hen’s eggs or in mammalian cells, before being inactivated and purified for use in vaccines — this is a biological production process, and can take up to six months to complete. This means the wild type viruses circulating across the globe can continue to mutate while the vaccines are being made. If the viruses change enough, they may be able to evade the immunological “memory” the vaccines would provide us. Slow production times also render inactivated vaccines poorly suited to pandemic response, where speed is of the essence.

Enter messenger RNA (mRNA) technology. Unlike traditional flu vaccines, mRNA vaccines do not depend on the cultivation of viruses. Instead, they are based on the synthesis of carefully designed mRNA.

All of the cells in the human body contain proteins. These are the building blocks of life, involved in almost all of our body’s vital processes. Messenger RNA, in turn, is crucial to the synthesis of proteins. Our cells need instructions to build proteins, and mRNA provides these instructions in the form of genetic information. In a sense, mRNA acts as a kind of blueprint.

Vaccines can take advantage of this, using mRNA to instruct our cells how to produce a protein —or even just a small section of a protein— that is unique to whatever virus the vaccines are meant to protect us from. In the case of Covid-19, for example, vaccines include mRNA that teaches our cells to make the SARS-CoV-2 spike protein, which the virus uses to bind to our cells. Our immune system then recognizes these proteins as foreign entities and quickly gets to work, as it would against inactivated viruses or the wild-type virus itself.

Messenger RNA vaccines can be manufactured extremely quickly because they bypass the need for inactivated viruses or virus antigens. Unlike traditional vaccines, mRNA vaccines are synthesized chemically. The process is more akin to how a pharmaceutical drug like aspirin is produced than it is to how current flu shots are produced.

As soon as researchers have a complete sequence of a virus’ genome, they can isolate the section they want to use for vaccination —usually, the gene corresponding to the surface protein the virus uses to bind and enter our cells— and artificially synthesize it in the lab. The gene can then be inserted into a small, circular piece of DNA known as a plasmid. Plasmids are easy to replicate, allowing researchers to produce large amounts of the target viral gene at once. Finally, the plasmids are put into a reactor with a molecule that transcribes the viral RNA into mRNA. Any remaining plasmid material is broken down and the mRNA put through a series of purifiers before being packaged into the protective lipid shell. The whole process takes a matter of weeks rather than months. Or maybe even less: in 2013, a team of scientists at Novartis generated an mRNA vaccine candidate in the span of eight days.

Messenger RNA technology skips a large chunk of the usual vaccine manufacturing process by recruiting our very own cells as factories to make the antigen “onsite”, instead of having to produce it externally and administer it after the fact. All that’s needed for the mRNA vaccines is the relevant sliver of genetic material and a protective lipid shell. The rest of the work is done by us, inside our cells.

The protective lipid shell is crucial. Messenger RNA on its own is very fragile and any free floating or “misplaced” mRNA molecules in our body are quickly chopped up and broken down by enzymes. Added to this is the fact that mRNA cannot enter cells on its own, meaning it would never even be able to deliver the necessary genetic instructions. Lipid nanoparticles (LNPs) form a bubble around the delicate mRNA, helping to shield it and shuttle it into our cells (Figure 1).

A big part of the reason mRNA technology wasn’t introduced into the mainstream until recently is because finding the right combination of lipid nanoparticles had given researchers difficulties. In 2004, while working on small-interfering RNA (siRNA), which can selectively silence genes in mammalian cells, researchers at Alnylam Pharmaceuticals made a breakthrough: attaching a cholesterol molecule to the siRNA allowed it to pass through cell membranes. A later breakthrough improved on this discovery by adding a transient positive charge to the lipid nanoparticle, creating a bubble around the siRNA that protected it and helped ferry it into cells more effectively. Although designed for siRNA, the same delivery technology opened the door for improved mRNA therapeutics. In fact, Pfizer and Moderna used very similar lipid nanoparticles to ferry the mRNA in their respective Covid-19 vaccines. And according to Alnylam, the lipid nanoparticle formulation is too similar to its own, leading them to file a lawsuit against the two pharmaceutical companies.

Messenger RNA vaccines may soon become even quicker and cheaper to produce by implementing self-amplifying mRNA (samRNA) technology. With conventional mRNA vaccines, the amount of mRNA in the vaccine is the amount of mRNA that will end up in the cell, and by extension, the amount of antigen produced. Self-amplifying technology combines the mRNA with enzymes from alphaviruses, which help the mRNA make copies of itself once inside the cell (Figure 2). This means fewer mRNA molecules need to be used per vaccine. The samRNA vaccines may also induce a more robust immune response, as the mRNA stays in the body for a longer period of time.

Faster production should allow manufacturers to keep up with new viral mutations; as soon as a variant of concern pops up, researchers could begin production of a bespoke vaccine to neutralize it. In the case of influenza, mRNA technology would improve the odds of vaccines being well matched to the circulating wild type viruses — something we continue to have trouble with, even as recently as this past flu season.

Unlike Covid-19 outbreaks, which are usually driven by one dominant circulating variant, seasonal flu outbreaks are characterized by multiple cocirculating strains. These strains are derived from the four main influenza viruses: influenza A(H3N2), influenza A(H1N1), and two influenza B viruses. To account for differences in the hemagglutinin surface protein between strains, traditional flu shots are “quadrivalent”, meaning they contain an inactivated version of each of the four viruses. But a synthesized mRNA sequence can only make one particular protein; an effective mRNA influenza vaccine would need four different sequences to make four different HA proteins. A 2020 study led by researchers at the Icahn School of Medicine at Mount Sinai suggests this shouldn’t be an issue. The team of scientists manufactured an mRNA vaccine against an influenza subtype that encoded four different proteins at once. They have since repeated the experiment for two additional influenza subtypes, and they plan to test a combined vaccine that encodes for a total of 10 to 12 different antigens across subtypes. This is part of a larger movement towards mRNA flu shots.

A more serious concern is that mRNA technology comes at the cost of thermostability. The delicate nature of mRNA renders it thoroughly unstable at room temperature, leading to degradation and loss of quality. In general, mRNA vaccines need to be stored and transported well below freezing — Pfizer’s Covid-19 vaccine needs to be stored at -94 Fahrenheit, colder than Antarctic winter. This makes global distribution and storage a serious challenge, especially in areas without ready access to electricity.

But, this too, is already becoming a problem of the past. A process known as lyophilization, or “freeze-drying”, allows researchers to dehydrate the mRNA solution and turn it into a powder. This powder is stable at room temperature and can be mixed with diluents just before administration. In 2017, researchers used this method to produce a rabies mRNA vaccine that retained its efficacy after being stored at 113 degrees Fahrenheit for 12 months. Even when stored at 158 degrees Fahrenheit for three months, the vaccine managed to protect mice from disease. In India, Gennova Biopharmaceuticals has just received emergency use authorization for their lyophilized Covid-19 mRNA vaccine, which can be stored between 35 to 45 degrees Fahrenheit without degradation. Instead of sub zero temperatures, standard refrigeration will do just fine.

What remains unclear is whether mRNA technology by itself could address a major issue plaguing current influenza vaccines: waning immunity. A 2018 meta-analysis of influenza vaccine durability found that protection can vanish as early as 90 days post vaccination. Recombinant and inactivated vaccines both suffer from this issue, even though they trigger immune responses in different ways. If the Covid-19 mRNA vaccines are anything to go by, waning immunity will likely continue to be a factor even if influenza vaccines made the switch to mRNA technology.

The next article in this series will look at the nasal spray flu vaccine —live attenuated influenza vaccine [LAIV]— which has faced a bumpy road ever since it was first introduced. What did it promise, and why has it fallen short?