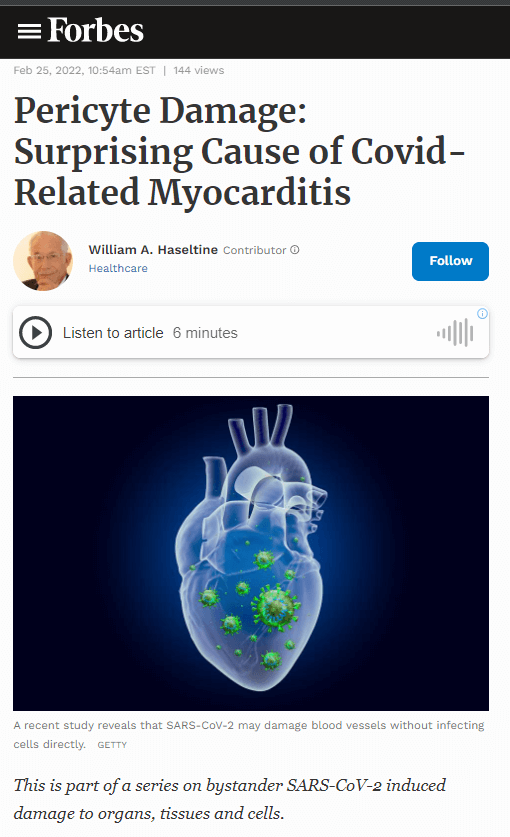 This is part of a series on bystander SARS-CoV-2 induced damage to organs, tissues and cells.

A recent study reveals the details of how SARS-CoV-2 affects pericytes, a cell type critical for the maintenance and repair of blood vessels. Surprisingly, the virus does not need to infect these cells directly to alter their function. Spike protein binding to the surface of the pericyte without virus entry suffices. Pericyte dysfunction may, at least partially, account for Covid-19 related myocarditis and other vascular disease.

There continue to be outstanding questions surrounding the extent of damage to tissues and organs as a result of Covid-19 infection. Injury to the lungs and upper respiratory system can be explained by damage to the lung epithelium either by direct infection and by hyperactive antiviral immune reactions. Covid-19 frequently damages other organs, including the heart, brain, pancreas, and kidneys, often without evidence of direct virus infection. We recently described how indirect damage to the olfactory neurons due to Covid-19 results in the loss of the sense of smell. Here, we describe experiments by Alovio et al. that explore how SARS-CoV-2 may damage the blood vessels in the absence of direct infection.

The investigators began their study with the realization that damage was occurring in the heart, despite scant evidence of direct infections. As Dr Elisa Avolio, the first author of this story from the University of Bristol Medical School, describes, “Microvascular complications are frequent and harmful in patients with Covid-19, with up to eleven percent of those hospitalized in intensive care units having myocardial damage or having suffered a heart attack.”

Curiously, researchers found that even though heart pericytes express the ACE-2 receptors needed for viral entry, they are resistant to infection. The authors recalled earlier experiments that found the S protein of SARS-CoV-1 stimulates human pneumocytes to produce pro-inflammatory factors in the absence of infection. Specifically, binding of the ACE 2 receptor by the SARS-1 S protein activates the RAF-MEK-ERK1/2 pathway that in turn stimulates production of CCL2 and other inflammatory genes.

Avolio et al. asked if similar viral pathways could be uncovered in heart pericytes. They found that exposing these cells to the SARS-CoV-2 S protein increased the activity of ERK signal transduction proteins, providing evidence that this viral protein does activate the Raf-MEK-ERK signal transduction pathway. Activating this pathway consequently destabilized heart pericytes, causing them to detach from blood vessels. Significantly fewer pericytes remained attached to the heart tissue in these samples, compared to controls not exposed to the viral proteins.

As heart pericytes detached and migrated from blood vessels, researchers also detected abnormalities in the endothelial heart cells that they left behind. Normally, cardiac pericytes and endothelial cells work together to stabilize blood vessels and control the flow of blood. In the presence of the viral S protein, however, the migration of heart pericytes not only disrupted their own function but also induced apoptosis, or programmed cell death, in the corresponding endothelial cells. Endothelial heart cells themselves do not express the receptors needed for the virus to invade and kill the cell. Therefore, to understand how these cells still die, researchers speculated whether functional changes in the pericytes could be producing this effect. In fact, that is exactly what they saw. Binding the viral S protein to heart pericytes and activating the Raf-MEK-ERK signaling pathway prompted the released pro-apoptotic factors that triggered the death of endothelial cells, as well as generated pro-inflammatory cytokines that damaged other nearby cells.

A surprise finding was that blocking ACE2-S protein binding does not prevent endothelial cells’ death. Prior research suggested that the cell surface protein CD147, another protein found on the surface of pericyte, can serve as a second receptor for SARS-CoV-2. They found that antibodies to CD147 that prevent block S protein spare the pericytes. Blocking binding to CD147 prevents the migration of heart pericytes away from blood vessels. The antibodies also block pericyte secretion of pro-apoptotic factors, sparing endothelial cells. Moreover, blocking the S protein-CD147 prevented activation of the Raf-MEK-ERK signaling pathway. Avolio et al. conclude that the primary action of infection is S protein binding to CD147 and associated integrins to send critical signals that compromise pericyte function.

To determine if the concentration of circulating S protein was sufficient to trigger the response studied in the laboratory, Avolio et al. measured the level of S protein in Covid-19 patients. Consistent with previous studies, they detected high levels of S protein in the blood of infected individuals, which peaked 5 to 10 days after infection. Researchers reported that these blood samples had an average S protein concentration of 33.5 ng/mL, which is notably lower than the 1000 ng/mL concentrations used for the isolated tissue experiments.

Avolio et al. demonstrate that circulating S protein in Covid-19 patients may impair vascular function in cardiac and other tissue by triggering pericyte disfunction. This is one of several recent reports that reveal a previously unknown mechanism of SARS-CoV-2 pathogenesis— S protein binding to surface receptors triggering dysregulation and/or cell death in the absence of infection.