The Best Reason To Keep Up To Date With Boosters: Covid-19 Protection From Infection, Hospitalization And Death All Wane Over Time 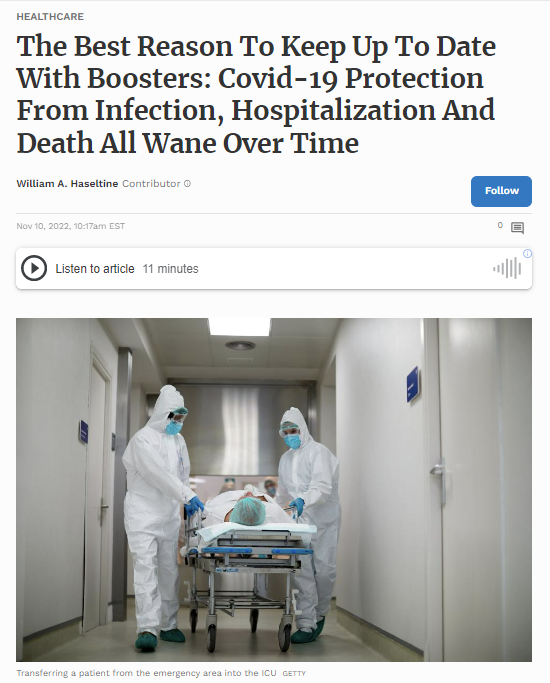 A report by the United States Centers for Disease Control and Prevention (CDC) makes clear that vaccines can only protect us if we let them: just as protection from infection wanes over time, so too does protection against serious disease and hospitalization. The message is clear, if we want to keep our guard up against the virus, we need to keep up with our booster shots.

What follows is an overview of the latest data on vaccines, immunity, and risk mitigation.

The gold standard for any vaccine is protection against the acquisition of infection — if you can’t get infected, you can’t get sick. But for most respiratory viruses, this is a high bar to set. Diseases like polio and measles grant us lifelong, “sterilizing” immunity after infection. By extension, so do the vaccines that protect against them. But unlike polio or measles, infection with a respiratory virus does not provide us with lasting immunity. This is why, for example, we have yearly flu seasons, with reinfections a common occurrence. Vaccine-induced immunity wanes accordingly.

Think of this as a general rule, and a thorn in the side of vaccinology: if natural infection doesn’t grant lasting immunity, it is going to be difficult to design vaccines that do.

Covid-19 is no exception.

The main driver of reinfections is viral mutation — changes to the structure of SARS-CoV-2, in particular the spike protein it uses to bind to our cells, allow the virus to bypass previously built-up immune responses. In brief, our immune system doesn’t properly recognize the virus because of the mutations.

Even without the presence of new variants, reinfections can still occur. Although we do not yet have an exhaustive understanding of the biomarkers associated with immune protection, known as “correlates of protection”, there is enough evidence to suggest that neutralizing antibody titers play a key role. These antibodies home in on the spike protein and bind to it, preventing the virus from entering our cells.

In both cases, the best way to mitigate the risk of another bout of Covid-19 is staying up to date with your booster shots. Since antibody titers begin to wane as quickly as three months following the last dose, I would recommend getting a follow-up booster every four to six months.

It is for this same reason that we need to update our flu vaccines every year, to make sure the antigens in the vaccine match those of the latest strains in circulation. When a mismatch does occur, we end up with a more severe flu season.

Again, Covid-19 is no exception.

For most of the pandemic, we have relied on first-generation Covid-19 vaccines to also act as boosters. Generally, these vaccines are formulated on the spike protein of the wild type SARS-CoV-2 strain. But this strain has long since been outcompeted by wave after wave of variants, all of which, owing to mutations, have slightly different spike proteins. The original vaccines have become poorly matched to the circulating strains.

Earlier this fall, the FDA authorized two such “bivalent” booster shots. One from Pfizer-BioNTech and one from Moderna. In both cases, the booster vaccine has been formulated to contain the genetic sequence for the wild-type spike protein as well as the sequence for the Omicron BA.4/BA.5 spike protein.

We are now beginning to see the data trickle in. Despite a rocky start, with preliminary results suggesting no difference in protection between the original, monovalent vaccines and the updated, bivalent booster shots, the tides are turning. A recent press release from Pfizer reports that people aged 55 and up enjoyed a four-fold increase in neutralizing antibody titers against Omicron BA.4/BA.5 compared to those who received a booster shot of the original Covid-19 mRNA vaccine. Compared to those who received no booster shot, neutralizing antibody titers a month after vaccination were 13 times higher in adults older than 55. Younger adults also saw the benefits, with a nine-fold increase in antibody titers.

In a study posted on the preprint server bioRxiv, researchers discovered that the bivalent booster shot also remains effective against the newest members of the Omicron family, BA.2.75.2 and BQ.1.1. Good news, considering these two sublineages are quickly rising to dominance across the globe.

Although these are still the early days, and we need to wait for real-world data to start flowing in before making any firm conclusions, these initial results are promising. They suggest that updating boosters to match circulating variants is a viable strategy: variant-specific boosters ensure not only high levels of neutralizing antibodies, but high levels of the right kind of neutralizing antibodies.

The CDC researchers collected data through the Influenza and Other Viruses in the Acutely Ill (IVY) network, consisting of 21 large hospitals spread across 20 different cities in 18 states. Founded in 2019, the initial purpose of IVY was to track influenza vaccine effectiveness among patients admitted to the intensive care unit (ICU). Following the outbreak of Covid-19, the initiative expanded to also enroll hospitalized Covid-19 patients. Their latest analysis is based on a group of 4,730 adult, immunocompetent patients enrolled between December 26, 2021 and August 31, 2022.

Clearly we can’t rely on prior vaccination to provide us with failsafe protection against severe disease and hospitalization if our last booster shot was more than 120 days ago. The booster shots work, but we can’t expect miracles; you wouldn’t expect a flu shot from last year to protect you this year, and it’s no different with Covid-19.

Until the development of long-lasting, “universal” coronavirus vaccines, our best strategy for protection against infection and hospitalization is staying up to date with our booster shots. Even better if they are variant-specific. This comes on top of continued mask-wearing, social distancing, and a general avoidance of crowded indoor spaces.