The N Protein, A New Target For Anti-Covid Drugs 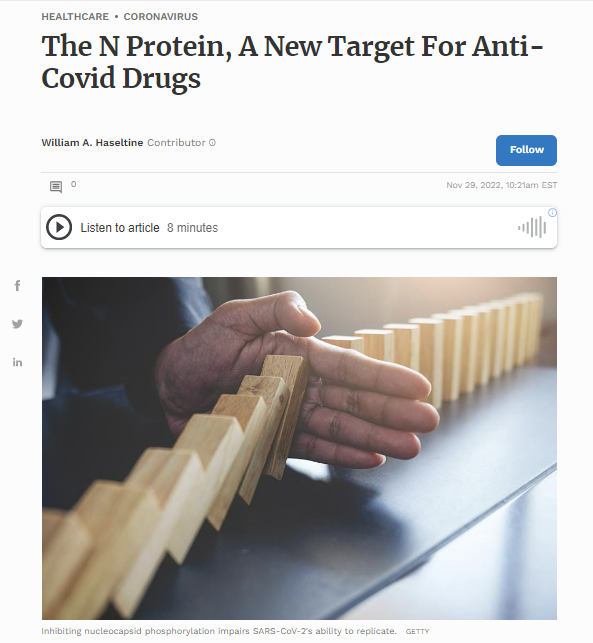 A cross-institutional effort between researchers at Weill Cornell Medicine and Duke University has yielded exciting progress in the search for new therapeutics against Covid-19. Where much of our current anti-SARS-CoV-2 arsenal is built around the virus’ spike (S) protein, many other proteins contribute to the viral life cycle as well. This includes the nucleocapsid (N) protein, which packages viral genetic material and helps suppress the host immune system, allowing the virus to replicate undisturbed. Yaron et al. show that inhibiting phosphorylation of the nucleocapsid protein successfully interferes with replication, leading to a significant reduction in viral RNA and infectious viral particles. Their work provides a clear path for future drug development. In fact, an FDA-approved kinase inhibitor used for the treatment of non-small cell lung cancer (NSCLC) proved effective against SARS-CoV-2.

These advances have been made possible by decades of research on a process called protein phosphorylation: when a phosphate group gets added to a protein and subsequently modifies its structure and function. A single protein may have multiple phosphorylation sites, which act as on/off switches for specific functions. The “switches” are activated by a family of proteins known as kinases. Blocking kinases can inhibit protein phosphorylation, and by extension, certain protein functions. This has proven an effective strategy at developing drugs against a number of diseases, including various cancers, autoimmune diseases, cardiovascular diseases, and the list goes on.

To our good fortune, Yaron et al. have now extended this approach to the realm of Covid-19, with promising results.

Despite heavy focus on the SARS-CoV-2 spike protein, the nucleocapsid protein is actually the most abundant protein in infected cells. And along with the spike protein, it is the other major immunogen. Its primary function is to bind to viral RNA and package it into fully-assembled viral particles. Aside from this, the nucleocapsid protein also plays a crucial role in the suppression of our initial immune response by blocking the stimulation of interferons (IFN) — antiviral proteins released as warning signals by infected cells. This also has downstream effects, since interferons often stimulate additional genes involved in antiviral immune defense.

Recent findings by the laboratory of Jennifer Doudna further emphasize the importance of the nucleocapsid protein: all successful SARS-CoV-2 variants have mutations in the linker region of the protein, and these mutations directly affect the speed of viral replication.

Phosphorylation of the Nucleocapsid Protein

The first step in determining which host kinases to use for drug development is determining the phosphorylation sites of the intended target. To do so, Yaron et al. infected human lung cells with SARS-CoV-2 and then extracted and analyzed them.

Although phosphorylation sites were detected across many different SARS-CoV-2 proteins, the nucleocapsid was the most heavily phosphorylated of them all. In particular, an area of the nucleocapsid protein called the serine/arginine (SR)-rich domain, located within the linker region of the protein. The same linker region that Jennifer Dounda’s lab identified as being critical to viral replication.

Even compared to other regions of the nucleocapsid protein, the SR-rich domain was the most densely phosphorylated (Figure 1).

Human kinases are picky. Generally they have distinct preferences for or against amino acids at their phosphorylation sites. These preferences are referred to as a kinase’s substrate motif. Think of this as a lock and a key: the substrate motif is the lock, and the kinase the key that interacts with it. Researchers have developed techniques that allow them to match kinases with their corresponding substrate motif — matching lock and key. Over time, this has led to a large library of kinase substrate motifs. For example, kinases known to phosphorylate serine-arginine rich proteins.

Along with being picky, kinases also like to band together. As such, proteins are often phosphorylated at various different sites in an ordered manner. In a phenomenon called phospho-priming, phosphorylation of a protein by one kinase “primes” the substrate by creating a knock-on motif that can be recognized by a second kinase: the first phosphate added facilitates the addition of others. The result? A domino-like cascade of phosphorylation.

Targeting an upstream kinase, one of the first primers, can effectively interrupt a cascade before it begins.

Drawing on previous research, Yaron and colleagues identified two promising kinase families for drug development: glycogen synthase kinase-3 (GSK-3) and serine-arginine protein kinases (SRPKs). Both kinase families had previously been implicated in phosphorylation of the SARS-CoV-1 nucleocapsid, and recent studies suggest they may play a similar role in phosphorylation of SARS-CoV-2 nucleocapsid.

They discovered that SRPK1 acts as the primer kinase, kicking off the chain. Once the substrate has been primed, GSK-3 comes in to further phosphorylate the SR-domain. Finally, one additional kinase —casein kinase I (CK1)— rounds it off. The latter two both depend on the upstream SRPK1 kinase in order to be able to phosphorylate the nucleocapsid protein. Knock out SRPK1 and you take out the rest of them as well.

Yaron et al. next tested two well-known synthetic SRPK1 inhibitors, SPHINX31 and SRPIN340 , for their ability to interfere with phosphorylation and interrupt replication. Indeed, cells treated with the inhibitors indicated a significant reduction in viral replication. In both cases, the levels of viral RNA and viral infectious particles were markedly lower than in the control group.

The researchers then combed through the FDA databases to find an approved drug that may provide similar benefits. They found an inhibitor of a different kinase, anaplastic lymphoma kinase (ALK), used to treat non-small cell lung cancer that, despite not directly targeting SRPKs, inhibits these as well. As before, treatment with the kinase inhibitor reduced viral RNA and infectious titer.

Even when infected with alphacoronavirus HCoV-229E, a very distant cousin of SARS-CoV-2, inhibition of SRPK1/2 reduced replication by 1000-fold.

Building off years of prior research, this work by Yaron et al. opens the door to a new approach for the treatment of Covid-19: inhibition of SRPK1/2 host kinases. With resistance against monoclonal antibodies on the rise, and resistance against Paxlovid sure to follow, new therapeutic interventions are sorely needed. While we wait for more Covid-19-specific kinase inhibitors to be developed, we might consider repurposing existing inhibitors to treat those most at risk, including upwards of 17,000 immunocompromised patients. The more drugs we have available to us, the more prepared we are to confront viral variation. Kinase inhibitors are a welcome addition to the quiver.